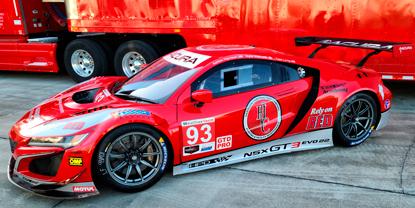 After successfully racing in GRANDAM and the Continental Sportscar Challenge series for over 25 years, Racers Edge Motorsports established themselves as strong competition in the SRO Fanatec GT World Challenge America powered by AWS series, most recently winning the 2019 GT3 Pro/Am Drivers Championship and 2020 GT3 Drivers, Team and Manufacturers Championships in an Acura NSX GT3 Evo. Through the support of HPD Racing, Racers Edge also helped develop and now operates the HPD Driver Academy program, which expands in 2022 to include a TCR race car in addition to the current NSX GT3 program.

Two-time IMSA WeatherTech SportsCar Champions and Two-time IMSA Michelin Endurance Cup Champions Wayne Taylor Racing enters its 16th year in sports car racing with a continued focus on its championship DPi effort with the current No. 10 Konica Minolta Acura ARX-05, while also beginning development and testing with Acura and Honda Performance Development of the LMDh Prototype (now named GTP). WTR has won the Rolex 24 at Daytona three of the past four years, recently placing second in 2022 in a stunning 1-2 Acura finish, just 3 seconds off the race winners. Continuing to field a four-car stable, WTR is set to kick off its driver development program once again in the North America Lamborghini Super Trofeo Series while expanding into the SRO series with partners Racers Edge, Harrison Contracting Company and driver Ashton Harrison.

Ashton Harrison, the 2022 full season driver for Racers Edge in SRO GT World Challenge America, will anchor the Sebring lineup. Harrison is a 2021 HPD Driver Academy graduate and part of the WTR driver development program. She will be joined by seasoned professional Kyle Marcelli, with whom Racers Edge won their 2019 GT3 title. Marcelli is also a coach for the HPD Driver Academy program, a driver for WTR in Lamborghini Super Trofeo Series, and the 2020 GS Michelin Pilot Challenge class champion. 2018 IMSA TCR Champion Tom Long, a former prototype factor driver and Harrison’s long-time coach, will round out the trio.

“This is a really fun and exciting opportunity for Racers Edge Motorsports. Wayne Taylor Racing has tremendous experience and success in endurance racing and merging that with our expertise and experience with the Acura NSX GT3 is a great combination. Add in HPD’s unmatched technical support and we’re confident we have a really strong effort! Our two teams and HPD all have a commitment to winning, so we’re looking forward to building on this collaboration for the future. And finally, having Ashton take on this challenge gives us yet another opportunity to showcase one of our HPD Academy graduates and we believe, a future star in Sports Car Racing.”

“It’s an exciting time for Wayne Taylor Racing to be working in collaboration with Racers Edge. We have been looking for some time on a way to put together a GTD program. It’s the next level for the program that we currently run in Super Trofeo in order to give our drivers a place to grow and develop within the IMSA WeatherTech platform. Racers Edge worked really well with HPD and Ashton in the Academy last year and I think they fit the overall brand that Wayne Taylor Racing strives to present. The package we have put together is strong. Wayne, Jon and I have had discussions on how to move this program forward in the future with the hope of building a long-term relationship between all our companies.”

“We at HPD are very enthused to be able to support Racers Edge Motorsports and Wayne Taylor Racing’s combined effort at Sebring.  Ashton Harrison’s challenging spirit is inspiring and having Kyle Marcelli back piloting an NSX GT3 Evo22 is a welcome reunion.  We are very happy to see another HPD Academy graduate make big strides forward in their career.”

“Having the opportunity to work with WTR and Racers Edge at Sebring and the SRO season is absolutely awesome. When myself, Wayne and Travis discussed putting the program together Wayne And Travis were very clear about teaming up with Racers Edge. They run a great program and have the resume to back it up. The 12 hours of Sebring is my favorite race of the season and to run in it with the driver lineup we have, support mechanisms from WTR and Racers Edge’s experience, there is no reason we can’t be very competitive in the race.”

Wayne Taylor Racing (WTR) was founded in 2007 by world renowned sports car champion Wayne Taylor. Based in Indianapolis, Indiana, the motorsports capital of the world, WTR has built a proven track record of success and ingenuity in both the IMSA WeatherTech SportsCar Championship Prototype class and the North America Lamborghini Super Trofeo series. Known for their prowess in endurance racing, WTR has won the coveted Rolex 24 at Daytona four times in the last five years and were named Vice Champions of the IMSA WeatherTech DPi Championship and Champions of the Michelin Endurance Cup in both 2020 and 2021. WTR has also won seven North America Lamborghini Super Trofeo Champions and fielded the only woman to win a Lamborghini World Finals race twice. Wayne Taylor has been inducted into both the South Africa Hall of Fame and the Sebring International Raceway Hall.

About the HPD Driver Academy Program:

Honda Performance Development, Inc., (HPD) has a rich heritage creating, manufacturing, and supporting Honda Racing and Acura Motorsports customers since 1993.  From pinnacle racing in INDYCAR and IMSA to commercial racing programs, HPD powers the dreams of professional and amateur racers from age 4 to 40+. HPD is a wholly owned subsidiary of American Honda Motor Co., Inc. and leads all of Honda and Acura’s high-performance racing programs in North America.  HPD specializes in the design and development of race engines, chassis and performance parts, as well as technical and race support. HPD offers parts and race support to Honda and Acura amateur and professional motorsports racers, and is continually expanding its palette of racing programs that make Honda racing products available to all racing styles.