WTR To Partner With Acura Motorsports In 2021

Commencing with the start of the 2021 IMSA WeatherTech SportsCar Championship season, Wayne Taylor Racing will field an Acura ARX-05 in its legendary blue and black No. 10 Konica Minolta colors in the Daytona Prototype International class. 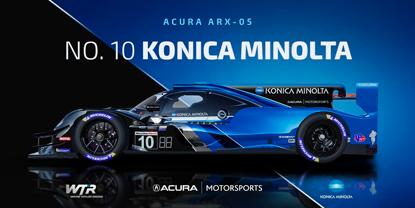 BROWNSBURG, Ind. (September 23, 2020) Wayne Taylor Racing announced today a new chapter in its championship-winning history. Commencing with the start of the 2021 IMSA WeatherTech SportsCar Championship season, Wayne Taylor Racing will field an Acura ARX-05 in its legendary blue and black No. 10 Konica Minolta colors in the Daytona Prototype International class.

Since its inception in 2007, Wayne Taylor Racing has been a prominent force in the IMSA WeatherTech SportsCar Championship paddock, winning three of the last four Rolex 24 at DAYTONA titles, the 12 Hours of Sebring and Petit Le Mans twice. In addition to its endurance victories, the team has garnered two IMSA Driver Championships including its standout 2017 Season where the team took the checkered flag in the first five races on their way to clinching the Daytona Prototype Championship. In its brief 14-year history, Wayne Taylor Racing has contributed to eight IMSA Manufacturer Titles.

“While Wayne Taylor Racing has been enjoying much success with Cadillac over the past several years, Acura and Honda Performance Division (HPD) have also had considerable success," said team owner and three-time World Sports Car Champion, Wayne Taylor. "All of us at Wayne Taylor Racing are looking forward to partnering with Acura and HPD and adding to their achievements. Our new partnership with Acura and HPD provides us with the long-term stability necessary to properly invest in the program and remain championship contenders for years to come.”

Wayne Taylor's personal history with Acura dates back to 1992, where he competed for Acura in the GTP Lights category, winning on his debut at Laguna Seca, and helping Acura secure the Manufacturer’s Championship that year. Taylor went on to become a two-time Rolex 24 at DAYTONA winner, 12 Hours of Sebring winner, the Inaugural Petit Le Mans winner, and Prototype winner at the 24 Hours of Le Mans. Taylor has been inducted into the Sebring Hall of Fame (2014) as well as the prestigious South Africa Hall of Fame (2019), joining fellow South African ambassadors such as Gary Player and Nelson Mandela.

The No. 10 Konica Minolta Cadillac DPi-V.R team has been leading the 2020 WeatherTech Sports Car championship since its Rolex 24 At Daytona victory in January and currently has a tight four-point lead advantage as it enters the final four races of the season. The 2021 driver lineup will be announced at a later date.