Renger van der Zande returns for his third season as full-time co-driver of the No. 10 Konica Minolta Cadillac DPi-V.R and will be joined for the 10-race IMSA WeatherTech SportsCar Championship campaign in 2020 by IndyCar Series and sportscar veteran Ryan Briscoe. 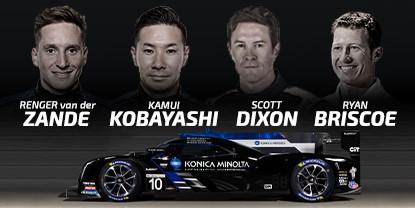 Renger van der Zande returns for his third season as full-time co-driver of the No. 10 Konica Minolta Cadillac DPi-V.R and will be joined for the 10-race IMSA WeatherTech SportsCar Championship campaign in 2020 by IndyCar Series and sportscar veteran Ryan Briscoe.

The duo’s first order of business will be defending the team’s 2019 victory in January’s season-opening Rolex 24 At Daytona with added drivers Kamui Kobayashi, the former Formula One and current FIA World Endurance Championship regular who was part of this year’s victorious Rolex 24 effort, and five-time IndyCar champion Scott Dixon.

Van der Zande, the 33-year-old from Amsterdam, co-drove with Jordan Taylor to a pair of victories and seven podium finishes the past two seasons, and earned the 2017 Rolex 24 pole position in his first race with the team. Taylor left after a seven-year run with the team that netted 19 victories and the 2013 and 2017 driver championships to join the factory Corvette Racing effort in the WeatherTech Championship’s GT Le Mans class.

“I am obviously very happy to be continuing with the team,” van der Zande said. “I think we’ve built up a good relationship over the past two seasons and it’ll be the third year in a row I’ll be driving for the same team, which is fantastic in terms of continuity. This team is all about continuity and repetition, doing things better and better every time you do them. That’s why there are so many people with this team who have been there for 10-plus years, some over 15 years. That’s also what makes this team good, makes it great. Obviously we’re working on having great success in 2020. I’m happy to continue, happy to move forward, and this definitely feels like my American home.”

Briscoe, the 38-year-old from Australia, joins the team after a four-year run with the Ford Chip Ganassi Racing GT Le Mans-class program. With full-time co-driver Richard Westbrook and the addition of Dixon at the endurance events, his No. 67 Ford GT scored eight class wins, 18 podium finishes and eight pole positions in 44 races, including a class victory in the 2018 Rolex 24. Briscoe also was part of the team’s 24 Hours of Le Mans effort the past four seasons with a best class finish of third in 2016. In 11 seasons on the IndyCar circuit, including three with Ganassi and five with Team Penske, Briscoe scored seven victories and 27 podium finishes and qualified on the pole 12 times, including the pole at the 2012 Indianapolis 500. His best IndyCar points finish was third in 2009 with Team Penske.

“I’m really excited to be joining WTR,” said Briscoe, who’s driven with the No. 10 team five times previously, including Rolex 24 efforts in 2006, 2011 and 2012. “I’ve always had so much respect for the organization. They’ve been so successful and are one of the most committed teams in the IMSA WeatherTech Championship. It’s an honor to join them as one of their full-time drivers. The Cadillac DPi is a fantastic machine and I can’t wait to drive it.”

Kobayashi, the 33-year-old from Japan, returns to the team for the 2020 Rolex 24 after co-driving with Taylor, van der Zande and Formula One veteran Fernando Alonso to victory this past January, the team’s second win in the endurance marathon in three seasons. He co-drove the No. 7 Toyota Gazoo Racing LMP1-class entry to second in the most recent World Endurance Championship standings and is back with that team full-time this season. Kobayashi was highly instrumental in the Rolex 24 victory, keeping the No. 10 Konica Minolta Cadillac DPi-V.R in the lead for 72 of his 87 laps behind the wheel. It was his first career Rolex 24 outing.

“First of all, I want thank to Wayne Taylor Racing and Konica Minolta for giving me a chance to race at Rolex 24 hours for two years in a row,” Kobayashi said. “I had a great experience in winning with WTR and the Konica Minolta Cadillac DPi last year at Daytona, so I am really looking forward to go back there to try to win the race again. I know it is not easy to repeat the success the team had there last year but, with my 2019 teammate Renger and with very strong new teammates, I think we should be able to challenge for win. Ryan and Scott are not only talented, but they also have had great success in other U.S. racing series, so I am really looking forward to working with them.”

Dixon, the 39-year-old from New Zealand, is a veteran of 19 IndyCar seasons, the last 18 of which he spent with Chip Ganassi Racing. He is a five-time series champion, the most recent title coming in 2018. Among his 46 career race wins and 115 podium finishes is his victory from the pole at the 2008 Indianapolis 500. Dixon also has contested 36 sportscar races dating back to 1999, including 12 with the Ganassi Ford GT effort the past four seasons. In addition to his 2018 Rolex 24 class victory with Briscoe and Westbrook, he has scored a pair of overall Rolex 24 wins in Ganassi Racing prototypes. The first was the 2006 Rolex 24 alongside Casey Mears and Dan Wheldon, the second with Tony Kanaan, Kyle Larson and Jamie McMurray in the 2015 Rolex 24.

“I’ve been with Chip Ganassi Racing’s sportscar program since its inception back in 2004, and we’ve enjoyed a good amount of success together over the years,” Dixon said. “With the Ford GT program coming to a conclusion in 2019, the opportunity with Wayne Taylor Racing became available, and it’s something I’m really excited about. I’ve always loved racing Prototypes and to get back to the top class is something I’m looking forward to, for sure. Wayne and his team run a very strong program and have been proven contenders for years, now. Ryan and I obviously have a long history together, so I think that will be important, as well, to get a fast start. I’m looking forward to teaming up with Renger and Kamui and hope to contribute to the overall success of the No. 10 car.”

The No. 10 Konica Minolta Cadillac DPi-V.R team has been among the most dominating at the Rolex 24 since the team’s inception in 2007. It has reeled off six race-day podiums in its last seven outings at the iconic endurance marathon, including the 2017 and 2019 victories, with a total of 1,222 laps led from 2013 through 2019. The team enters the 2020 season coming off a runner-up finish at the Petit Le Mans finale at Road Atlanta, which locked in a top-four finish in the final standings.

“Obviously, these are some of the biggest changes we’ve made in the way of our driver lineup,” team owner Wayne Taylor said. “Ricky (Taylor, eldest son) left two years ago and Jordan’s been with us since forever, it seems like. With him leaving, we’re in some ways starting with a clean sheet of paper. Renger has been with us for two years and he has done a good job. Ryan and Max (Angelelli, former co-driver and current team owner) and I have always worked together, so there is a lot of familiarity there. For the longer races, we’re excited to have Kamui back to help defend our Daytona championship, and Scott Dixon certainly brings us a fresh, new look to the team with a history of winning races and championships. So, despite all the changes, everything will kind of still be the same, and everyone is highly motivated. The team is looking forward to some change. You’ve got to have change in life and I think this is a good time. I’m proud of Jordan for getting selected to drive the factory Corvette. It would have been difficult to turn that down. I wish him well and the team does, too. I’m also excited with the announcement of the new head of IMSA, John Doonan. He’s a guy I’ve known for years and he understands what we’re all trying to do, especially in the business-to-business arena, which has always been so important to us. John knows these cars, he understands BoP (Balance of Performance), and we feel absolutely revitalized having him in charge. I’m really looking forward to good things happening in 2020.”