The blue and black Konica Minolta machine contested the lead until the very end with co-drivers Ricky Taylor, Filipe Albuquerque, Will Stevens and Alexander Rossi achieving the team’s fourth consecutive trophy at the crowning event on the IMSA WeatherTech SportsCar Championship calendar and bringing home a 1-2 finish for Acura Motorsports and Honda Performance Development. 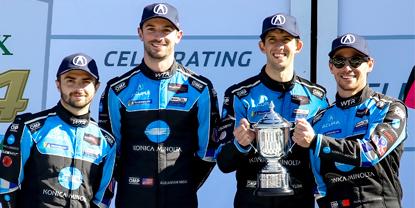 The No. 10 Konica Minolta Acura ARX-05 team finished in second position in the 60th Running of the Rolex 24 at DAYTONA with a persevering performance that saw them fight back from two laps down to secure a podium finish. The blue and black Konica Minolta machine contested the lead until the very end with co-drivers Ricky Taylor, Filipe Albuquerque, Will Stevens and Alexander Rossi achieving the team’s fourth consecutive trophy at the crowning event on the IMSA WeatherTech SportsCar Championship calendar and bringing home a 1-2 finish for Acura Motorsports and Honda Performance Development. The Konica Minolta team currently holds second place in the championship just behind this year's 2022 Rolex 24 at Daytona winner, the No. 60 MSR Acura ARX-05 team.

Filipe Albuquerque led the field away from green and despite bitterly cold track temperatures, kept the team in the top-five throughout his early stints, handing the car to British driver Will Stevens with 22 hours remaining in the race. Stevens’ first IMSA endurance seat time saw him take the lead before unavoidable contact cut a tire. Despite falling two laps off the lead, Ricky Taylor put his head down and, with the help of numerous cautions, stormed back to the front, as dusk fell on Daytona Beach.

Alexander Rossi, Filipe Albuquerque, and Will Stevens rotatedthrough the late hours of the night and early morning, before Taylor handled the difficult day-to-night transition in the No. 10 Konica Minolta Acura. The team fluctuated between P1 and P3 as the near-freezing overnight temperatures did little to cool off the hotly contested DPi battle for the overall lead.

Rossi and Albuquerque took turns behind the wheel as the Sunday sun rose higher and the clock ticked down, battling for the lead amongst the top-three competitors, before Taylor once again took the helm for the final fight to the finish, just seconds besides his former teammate and co-winner of the 2021 Rolex 24 trophy last year, Helio Castroneves.

“I’m very proud of being part of the Acura/HPD program and sponsored by Konica Minolta, Harrison Contracting and CIT,” said Team Owner Wayne Taylor, who was named Honorary Grand Marshal and honored in the pre-race festivities with fellow recipients Marion Andretti, Hurley Haywood, Jack Roush, Bobby Rahal and Scott Pruett.  “A big thanks goes out to everyone on my team. The drivers all did an outstanding job. Obviously, I wanted to win, but if I wasn’t going to win I wanted an Acura to win. I didn’t want anything else, so I feel great to be part of such an amazing manufacturer who understands racing and how to communicate with people. They really care about everyone on the team. I see a great future together with Acura and all my partners. Four in a row was going to be a new record and it just didn’t happen. It’s what you live with. I’m more upset for the drivers and team, to be honest, than I am for myself. I know how hard they all worked. Ricky, Filipe, Will and Alex were outstanding throughout and the team fought back from adversity. We were two laps down and they did what they do. I’m very happy and I’m so glad there was a one-two for Acura who were up against five Cadillacs and the might of Ganassi and Action Express. We did it again.”

After becoming the most prolific qualifier in IMSA history in 2021 and winning the Michelin Endurance Cup, veteran and two-time IMSA WeatherTech SportsCar Champion Ricky Taylor scored his second consecutive Rolex 24 at DAYTONA podium to kick off 2022.

“A great day for Acura,” said Ricky Taylor. “HPD does so much work for us and I think it shows in the reliability. We were up against five other Cadillacs versus two Acuras. The reliability was amazing and the performance of the engine and the cars was flawless. The team executed beautifully, but I just didn’t have enough at the end to go get Helio. I’m disappointed right now, but tomorrow we’ll begin working towards Sebring. I think it’s a really good start to the year. I’m really proud to have my teammates next to me, they all did an amazing job. Thanks to Konica Minolta, Harrison Contracting and all the guys that gave us the opportunity to be here. Looking forward to Sebring now. It can’t come soon enough.”

Returning full time co-driver of the No. 10 Konica Minolta Acura ARX-05 and 2021 Michelin Endurance Cup Champion Filipe Albuquerque, who has won at Daytona twice in DPi and once in GT machinery, commented on the hard-fought trip around the clock to secure his second consecutive Rolex 24 podium.

"What is there to say,” said Filipe Albuquerque. “It was a great job from everyone at Wayne Taylor Racing, Konica Minolta and Acura. Congratulations to Acura for the one-two finish. To be honest, I don’t think anyone expected that because I don’t think we had pace to match the Cadillacs, but that’s how it unfolded. When it’s that close, you want to win. It’s such a long race, everyone is so tired. The emotions are strong when you win, and emotions are really strong when you lose. We’re all sad, especially when we were so close, but it is what it is. We continue the championship, and our focus is now on Sebring."

Will Stevens, who made his IMSA WeatherTech SportsCar Championship racing debut during the Rolex 24. With a podium in his first effort, he remains fully focused on improving at the next round.

“Overall, it’s obviously not the result we wanted,” explained Will Stevens. “We came here with high hopes and we came here to get the win - the result these guys deserve. We’re disappointed, but it’s a great result for Acura, finishing first and second. As it’s my first time with the team, I’d have loved to win, but we can be proud of the fight we put up, and next time we can do one better in Sebring.”

“We almost did it," said Alexander Rossi. “It’s amazing for all of Wayne Taylor Racing to be able to say that they had an opportunity to win a historical four in a row. Ultimately, we came up a little short, but an amazing day for Acura and HPD. To get a one-two finish here in a race where, historically, they’ve struggled. To finally get the results and to get two Rolex 24 at DAYTONA wins in a row and a one-two today is amazing. It’s special to be a part of it.”

Thursday, March 17th will mark the start of the Mobil 1 Twelve Hours of Sebring presented by Advance Autoparts weekend with Practice 1 at 10:15 a.m. EST. Green flag for the 12-hour battle waves at 10:40 a.m. EST on Saturday, March 19th.