At the 25th Running of the MOTUL Petit Le Mans, the No. 10 Konica Minolta Acura ARX-05 came up just short of the title, finishing second in the points standings after a dramatic chase in the final minutes culminated in mechanical damage for the blue and black machine. 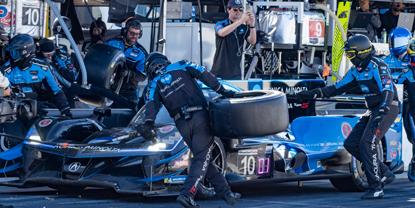 The 25th Running of the MOTUL Petit Le Mans has seen the end of the DPi era, with the 2022 IMSA WeatherTech SportsCar Championship on the line in the final event. The No. 10 Konica Minolta Acura ARX-05 came up just short of the title, finishing second in the points standings after a dramatic chase in the final minutes culminated in mechanical damage for the blue and black machine. Although the Wayne Taylor Racing team didn’t capture the drivers’ championship, the team’s success throughout the 2022 season boosted Acura to the manufacturers’ championship which was secured at the drop of the green flag today.

As the green flag flew for Petit, Ricky Taylor started behind the wheel of the No. 10 Konica Minolta Acura ARX-05 for the opening stint of final event on the IMSA season. The 10-hour race started with Taylor pitting immediately in order to switch out Friday’s qualifying tires for a fresh set, securing his qualifying points and avoiding a penalty for pitting before the start. Despite dropping to the rear of the DPi field and battling traffic, Taylor was able to gain positions and get the sister Acura car back in his sights.

During the second caution period of the day, Taylor brought the No. 10 Konica Minolta Acura ARX-05 to pit road to end the first stint of the 10 hours and swapped positions in the driver’s seat to the team’s third co-driver for the weekend, Brendon Hartley. The New Zealander quickly began putting pressure on their championship rivals. A timely yellow in the pit window circulated Hartley to the lead, however, the team still needed to come to pit lane for fuel and tires, shuffling the No. 10 Konica Minolta Acura ARX-05 back to fifth for the restart at the seven-hour mark. With Hartley still in control through another caution period, it was time to make the trip down pit road once again for a full-service pitstop of four tires and fuel. The crew excelled in their stop and was able to exit the pits ahead of their fellow championship contenders.

Hartley completed his drive time in one run, a triple stint, before Albuquerque took over. Luck was on the side of the team with another caution falling as they completed their green flag pitstop, putting Albuquerque into the lead of the race.

Albuquerque settled into controlling the field and navigating traffic. As the halfway point of the 10-hour race was reached, Albuquerque built a lead of over two-and-a-half seconds ahead of second place. The team soon called Albuquerque in for a pitstop before a stalled car by pit lane entry nearly collided with the No. 10 Konica Minolta Acura ARX-05.

With over two hours remaining, Taylor came to pit road and traded driver positions with Albuquerque to finish out the event. As the final hour of the 10-hour race ticked on, the intensity grew with the championship battle on the line. A race proven to provide the unknown and unpredictable in the final hour, history proved repeatable as both two non-contending teammate DPis made contact to bring out a caution with 51 minutes to go. Under the yellow flag, Albuquerque brought the No. 10 Konica Minolta Acura ARX-05 to pit lane for service and a tight battle saw the sister Acura edge out in front. Before coming back to green, the team decided to come back to pit road to top off with fuel. Knowing the No. 10 Konica Minolta Acura ARX-05 didn’t have to worry about saving fuel as the field restarted, went to work catching the championship rivals in a 30-minute dash to checkered. Pushing to the limits, the Portuguese driver closed an almost four-second gap to the No. 60 Acura and took a daring move around the outside of Turn 1 in hopes of taking the race and championship lead. As the No. 60 Acura held the first position out of Turn 1, lapped traffic made contact with Albuquerque, effectively ending the team’s night early.

“It is very disappointing not to win the championship,” said Ricky Taylor. “I’m very proud of the team. Everybody at Konica Minolta, HPD, and Acura fought really hard. We didn’t get here by chance, it was a lot of hard work and fighting. I couldn’t be more proud to be teammates with Filipe. He gives everything and we wouldn’t be in this position in the championship without him. We take risks and I don’t even think what took us out was even a risk. He was fighting for the win and I had no doubt that he was going to pass the 60 car if he had the chance. Thank you to everybody. This will be some huge motivation for next year. I think the positive is if you look at all the teams in the series, there is one consistent thing–you can never sleep on the 10 car. We are always gonna be there fighting and you have to do a very good job to beat us. Next year even more so. We are very excited to redeem ourselves next year.”

“I’m simply devastated with the ending,” said Filipe Albuquerque. “I really think we were doing a perfect race and unfortunately the last pitstop wasn’t great for our side. Obviously, when you start on pole and up front, you always have a little bit of an advantage. Traffic always benefits the guy leading and it got me big time there. We were quick and we caught back. Passing a GT car and I don’t think he saw me and the level of risk was high. We touched and my car was damaged and it was over for us. It was a bit inglorious to finish like that. So competitive and tight fun today, but it is what it is. It’s a shame for two years in a row to be so close. One thing is for sure, we are always there. Unfortunately, it’s not us winning. Great job by Wayne Taylor Racing the whole season and Acura for securing a 1-2 in the championship. Tomorrow, we start preparing for 2023.”

“I’ve really enjoyed my experience with WTR. I was up-to-speed in the race and we fought hard. Big thanks to the entire crew and especially Ricky and Filipe who made me feel part of the family - we had good laughs together all week. It was heartbreaking to see the win and championship slip away in the last moments. Filipe was on maximum attack and we have no regrets. I played a small part in their season but was proud to play a small part.”

"Congratulations to Mike Shank for winning the drivers’ and teams’ championships,” said team owner Wayne Taylor. “What can I say. We thought we had it, but didn’t. Everybody gave it their all. Thank you to HPD, Acura, Konica Minolta, Harrison Contracting, CIT, all our partners and the drivers. Everybody did a fantastic job. We led for a long time. It just was another year of coming second. Everybody did as much as they could, couldn’t do more.”

The entire Wayne Taylor Racing team sets their focus now to the 2023 IMSA WeatherTech SportsCar Championship and ushering in the new LMDh era of racing. While the team will be busy with preparations on the new Acura ARX-06 over the winter months, the action returns for the next season with the Roar Before the 24 and Rolex 24 Hours of DAYTONA on January 20-28, 2023. Stay tuned to Wayne Taylor Racing’s official social media channels for news, updates, and announcements.