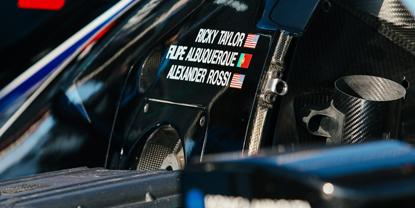 The current IMSA WeatherTech Championship points leaders will look to extend their lead this weekend at Watkins Glen International for the Sahlen’s Six Hours of the Glen. Alexander Rossi will return to the No. 10 Konica Minolta Acura ARX-05 alongside full-time co-drivers Ricky Taylor and Filipe Albuquerque at the 3.4-mile, 11-turn permanent road course located in Watkins Glen, New York.

In addition to winning this notable six-hour endurance race back in 2011 from the pole, the Wayne Taylor Racing team has secured five podium finishes, eight top-five finishes and led 249 laps throughout their 13 years of competing at the historic circuit.

The No. 10 Konica Minolta Acura ARX-05 team will also be looking to achieve another endurance victory after winning the Rolex 24 at DAYTONA earlier this year, its fourth in five years at the season opener. With 27 points, they currently lead the IMSA Michelin Endurance Cup DPi Championship over the #55 Mazda Motorsports DPi by a slim 4 point margin.

This will be Ricky Taylor’s third event at Watkins Glen driving an Acura ARX-05, and his eighth Sahlen’s Six Hours of the Glen overall. His resume includes one win, one pole, three podium and six top-five finishes at the six-hour endurance race.

“So far our season has been right on schedule,” said Ricky Taylor. “The team is executing well. We survived Detroit with a strong result at a track that was earmarked as one of the more difficult races for us. Now we go to Watkins Glen where we should have a very strong performance. It’s ben ten years since the No. 10 Konica Minolta team’s last win there, so it would be sweet to get another.”

Filipe Albuquerque hopes to achieve another victory at Watkins Glen International after achieving back-to-back victories in 2016 and 2017.

“Watkins Glen is a track that suits our car,” said Filipe Albuquerque. “I’m looking forward to it after being really happy of our result at Detroit. It was not a track for us, and it was a bit obvious that we did not have the same pace of the Cadillacs, but we finished with a third-place finish. We are here to win races and Watkins Glen is a track that suits our car. I hope we have the advantage in terms of speed compared to the Cadillacs and we can grab the win. It’s not always the fastest car that wins, but the team that has the least number of mistakes and leads the last lap. I’m excited about Watkins Glen especially because we had a very successful test here recently.”

Alexander Rossi joins the No. 10 Konica Minolta Acura team after driving at the Rolex 24 at DAYTONA and Twelve Hours of Sebring. While Rossi has not competed at Watkins Glen in the IMSA WeatherTech SportsCar Championship, the American won from the pole position during the 2017 NTT IndyCar Series season.

“Thrilled to get the opportunity to go back and race at Watkins Glen as it is one of my favorite tracks in the world,” said Rossi. “I wasn’t originally planning on joining WTR and Acura for this event, but I will do everything in my power to assist them on and off the track to ensure they continue to be in control of this championship.”

“The Six Hours of Watkins Glen is always one of my favorite races,” mentioned Wayne Taylor. I never won there as a driver which is disappointing, but I’ve won it as a team owner. It’s a real road course like the old days in Formula 1. We had a relatively good race in Detroit, but I’m feeling much more confident going into this one. More high speed on a track which is good for our car. We’re bringing Rossi back on board for this race, under normal circumstances we wouldn’t bring a third driver, but since it could be hot, we’ll need someone else. Ricky and Filipe do such a good job together. I can’t wait to get back.”

About Konica Minolta Konica Minolta Business Solutions U.S.A., Inc. is reshaping and revolutionizing the Workplace of the Future. The company guides and supports its customers’ digital transformation through its expansive office technology portfolio, including IT Services (All Covered), content services, managed print services and industrial and commercial print solutions. Konica Minolta has been included on CRN’s MSP 500 list nine times and The World Technology Awards recently named the company a finalist in the IT Software category. Konica Minolta has been recognized as the #1 Brand for Customer Loyalty in the MFP Office Copier Market by Brand Keys for fourteen consecutive years, and received Keypoint Intelligence’s BLI 2021 A3 Line of The Year Award and BLI 2021-2023 Most Color Consistent A3 Brand Award for its bizhub i-Series. Konica Minolta, Inc. has been named to the Dow Jones Sustainability World Index for nine consecutive years and has spent four years on the Global 100 Most Sustainable Corporations in the World list. Konica Minolta partners with its clients to give shape to ideas and works to bring value to our society. For more information, please visit us online and follow Konica Minolta on Facebook, YouTube, LinkedIn and Twitter. Wayne Taylor Racing’s existing lineup of partners that also features Harrison Contracting, Acura Motorsports , Hammer Nutrition  and CIT.