In another thrilling finish at Michelin Raceway Road Atlanta, the No. 10 Konica Minolta Cadillac DPi-V.R team secured its third win at the famed Motul Petit Le Mans and second endurance victory of the season. 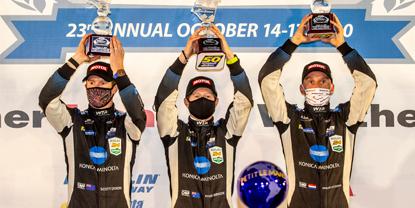 In another thrilling finish at Michelin Raceway Road Atlanta, the No. 10 Konica Minolta Cadillac DPi-V.R team secured its third win at the famed Motul Petit Le Mans and second endurance victory of the season. After 10 hours and 460 laps of hard-fought battles, Renger van der Zande brought the blue and black Konica Minolta car across the line first, winning overall and extending the team’s lead in the IMSA WeatherTech Championship by eight points.

After qualifying fifth, Ryan Briscoe started the endurance-classic on a beautiful crisp Fall afternoon in Braselton, GA. With no inclement weather on the horizon, the 10-hour endurance classic was to be an all-out battle from the very first lap. While the No. 10 Konica Minolta drivers of Briscoe, Renger van der Zande and Scott Dixon joined in on the action from the drop of the green, they did so with the overall goal of preserving their Cadillac-powered machine to the end of the challenging event.

Through clever pit strategy and fuel conservation by the drivers in the early stages of the race, the No 10. Konica Minolta Cadillac team were always able to go further than its immediate competitors, therefore gaining an advantage in being able to open up wider pit windows towards the tail end of the event. After several clean stints and never falling below the Top 5 during the daytime, Briscoe, van der Zande and Dixon really brought the heat as the sun started setting at the picturesque venue. As night set in and temperatures dropped, the No. 10 Konica Minolta Cadillac DPi-V.R came into its own and the team found themselves well inside the Top 3.

But it would all come down to the final stint. Renger van der Zande slashed a 25-second gap to the leaders all the way down to 10 seconds with just 10 minutes remaining. As the Dutchman looked set to challenge for the lead before the end of the race, the two leaders made contact while battling for position, both going off course. In a great display of heads up driving, van der Zande was able to avoid the chaos at turn six and take the lead.

With a full course caution out as a result of the incident, van der Zande now had the entire field to fend off at the final restart with some five minutes remaining. The two-time Motul Petit Le Mans winner did not falter under pressure and made a terrific restart to jump into a sizeable lead after just a few corners. In keeping with the theme of aggressive driving, another full-course yellow was to fall shortly thereafter which would see the race finish under caution. After 10 hours of perfect execution and being in the right place at the right time, the No. 10 Konica Minolta Cadillac DPi-V.R crossed the line first, scoring its second endurance win of the season, having dominated the Rolex 24 at DAYTONA in January.

Thanks to a flawless drive, the No. 10 Konica Minolta Cadillac DPi-V.R team not only grabbed its third overall win at the Motul Petit Le Mans, but also extended its lead in the IMSA WeatherTech SportsCar Championship to eight points with two races remaining. With the victory, van der Zande and Briscoe both grab their third wins at the famed event, with Dixon scoring his first ever win at the endurance classic as well as his first non-Rolex 24 at DAYTONA win in IMSA.

“I’m almost speechless,” exclaimed team owner Wayne Taylor. “This is one of the hardest races and now I’ve won it four times, once as a driver and three as a team owner. We had so many problems going on throughout the race that people don’t know about and we didn’t know where we would end up. It’s a tribute to the No. 10 Konica Minolta Cadillac DPi-V.R team. These guys work so hard and never give up. It all paid off really well and gives us a greater points lead in the championship, so I’m very happy about that. I can’t say enough about Renger, Ryan, and Scott. I’m blown away. “

“We’re super happy,” commented Renger van der Zande. “ It was a crazy race where we were lucky at the end, but we kept chipping off lap time to get up to the leaders. We had all kinds of issues during the race, a battery issue where it was going down and we had to drive with low power steering, so it was hard to drive and had no air conditioning so it was very hot in the car, but those just make the win that much sweeter.”

“Great day,” mentioned Ryan Briscoe..” It was a hard-fought weekend. We started out with some issues on the car, we had to change the whole brake system. During the race when Renger got in the car for the first time the car shut off twice out on the race track. Our battery voltage was dying, so it was actually very scary the whole race and we weren’t sure if we were going to make it to the end. The start of the race the car was not great, but we set it up for the night and for the finish, so when the track rubbered in the car got better and better. We had a plan and it went to plan and Renger was doing some awesome lap times at the end and was bringing down the gap, then those guys crashed, and we got the win. It’s just fantastic. “

“I have to say I really enjoy being a part of this team.” said Scott Dixon. “I’m two-for-two while being with Wayne Taylor Racing. Daytona was obviously a crazy start to the season, and this was such a big weekend with the championship fight being so close. This was such a big weekend for Wayne and the team. And it’s always such a pleasure to drive with Renger and Ryan. All I try to do is not fire it off the track and create too much of a deficit. It was an enjoyable weekend. We had a little bit of luck, but we had the pace. The car was super-fast and Renger drove the wheels off of it at the end where we closed an almost 20 second deficit towards the final few laps.”

The 2020 IMSA WeatherTech SportsCar Championship continues in just two weeks with a two-hour, 40-minute sprint race at WeatherTech Raceway Laguna Seca. Full-time drivers Ryan Briscoe and Renger van der Zande will be behind the wheel at the Monterey, CA venue, and will be joined again by Scott Dixon for the season finale at Sebring International Raceway and the 12 Hours of Sebring on November 14.