With two Championship Title goals in mind, the No. 10 Konica Minolta clinched the Michelin Endurance Cup Crown, but fell just one point short of the 2020 IMSA WeatherTech SportsCar Championship. 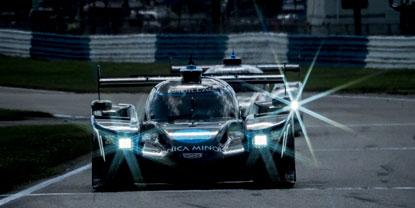 The No. 10 Konica Minolta Cadillac DPi-V.R Team came to the 68th Running of the Mobil 1 Twelve Hours of Sebring with two goals: clinch the IMSA Michelin Endurance Cup as well as the IMSA WeatherTech SportsCar Championship. The 2013 and 2017 championship-winning team reached the first goal and achieved the Michelin Endurance Cup Crown for the first time in team history but fell just one point short of the 2020 IMSA WeatherTech SportsCar Championship title.

“It’s a strange feeling,” said team owner Wayne Taylor. “This was my last race with Cadillac. The guys did a great job as usual. Unfortunately, we got taken out by the No. 77 Mazda which really killed our race. We ended up racing against Ricky and Helio for the championship. I’m really happy to be with Konica Minolta and for all that they have done for us. This team is incredible. The drivers drove well. We just missed the big show. Anyways onwards to next year with big new things.“

After qualifying an impressive second for the endurance-classic, Renger van der Zande took the green flag for the Konica Minolta team, immediately challenging for the lead. However, IMSA officials deemed van der Zande to have moved lanes before the start line, giving the Cadillac-powered outfit a drive-through penalty on lap four of the race, dropping the team to the back of the pack, more than 30 seconds adrift.

Over the next two stints, van der Zande put in an astonishing drive, moving from eighth to fourth before handing the car over to Ryan Briscoe. If the team were recipients of bad luck at the start, they would see some good luck fall their way at the two-hour, 21-minute mark, with a full-course yellow falling shortly after Briscoe had made his first stop of the day. The full-course yellow vaulted the black and blue Konica Minolta machine to the front of the field, which Briscoe would take full advantage of.

At the crucial points-awarding, four-hour mark, the No. 10 Konica Minolta Cadillac DPi-V.R found itself in the lead, scoring enough points to clinch its maiden IMSA Michelin Endurance Cup title. The feat is particularly impressive given the Endurance Cup is comprised of the IMSA WeatherTech SportsCar Championship’s crown jewel events including the Rolex 24 at DAYTONA, Six Hours of Road Atlanta, Motul Petit Le Mans and the Mobil 1 Twelve Hours of Sebring. Thanks in large to winning the 24-hour season opener as well as the Motul Petit Le Mans, the Konica Minolta team were able to clinch the Endurance Cup title by leading at the four-hour mark of the Mobil 1 Twelve Hours of Sebring.

With the Michelin Endurance Cup title sewn up, all eyes were on the remainder of the 12-hour race as well as the WeatherTech SportsCar Championship title. Unfortunately for the team, endurance-driver and six-time INDYCAR Champion Scott Dixon was hit at the four-hour, 52-minute mark, causing significant damage to the No. 10 machine. A trip back to the garage area was required as the team systematically worked to replace bodywork and a radiator. Despite the team's heroic effort, six laps were lost while repairs were made, taking the team out of race-winning contention.

As the sun started setting on the race as well as the 2020 season, the No. 10 Konica Minolta team’s sole focus became that of completing a clean race to maximize the points gathered. Van der Zande, Briscoe and Dixon would all take turns behind the wheel as the darkness set on the legendary venue, gaining time on the leaders throughout.

But, after a grueling season and the second longest race of the year, the No. 10 Konica Minolta Cadillac DPi-V.R team came home seventh, missing out on a third IMSA WeatherTech SportsCar Championship title by one single point. From a dominant Rolex 24 at DAYTONA showing in January, to consistent race finishes once the season restarted in July, the team only relinquished the championship lead for the last two events of the year.

While adding a third IMSA WeatherTech SportsCar Championship was the ultimate goal for the team, securing the IMSA Michelin Endurance Cup crown is a significant boost for the only 13-year old team, who has seen a long-standing partnership with General Motors and Konica Minolta lead to dozens of wins and three titles at the pinnacle of sports car racing in North America.

The team now looks ahead to the 2021 season in just two months at Daytona International Speedway where they will work to achieve three Rolex 24 at DAYTONA victories in a row.

Scott Dixon
“Definitely an interesting and frustrating day. It looked like it was all going so well, so to tie up Michelin Endurance Cup early on was really good. Then we just got into a position with Jarvis, obviously got hit and spun. The tire and radiator which put us in a compromising situation. It was just a racing incident, but I think it was optimistic and I don’t know where he was going to go because he hit us so hard. It’s very frustrating to be in that position, especially with Renger and Ryan who are going for the championship."


Ryan Briscoe
“We have to look at the whole season because we had a great year. We won some really big races and it came down to a point at the end of it all with the No. 7 car. We had a bit of bad luck today, which was very unfortunate, but all the contenders had bad luck. The No. 7 car just came out on top and they really dominated the second half of the season. We need to be proud of everything we did this year.”

Renger van der Zande
“It was a tough day. I believe we had everything today to make the championship happen and we finished second. I can’t be happy with that, but we won the Michelin Endurance Cup, so at least we’re going home with a trophy and second in the championship. The No.7 car had a great year with so many poles in a row and they won many races. They’re tough competitors. They had their bad luck in the beginning, and we had our bad luck in the end. I want to say thank you to the team and for being part of Wayne Taylor Racing for three years. It’s been an amazing time and we’ve had some big wins that I will remember for the rest of my life. There is a fantastic group of people that work very closely together and that’s something that I will remember forever and thank you to the team for all their effort.”