The Prestige Performance with Wayne Taylor team, which Is sitting third and fourth In the Dealer and Team Championships respectively, will look to make their mark here as they enter the final race weekend of the season with 7 wins and 18 podiums. 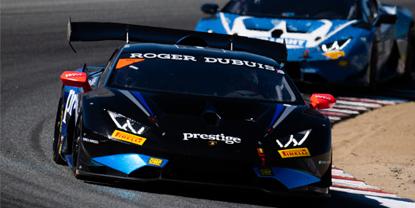 The Prestige Performance with Wayne Taylor Racing stable of Lamborghini Super Trofeos will compete in Misano, Italy at the Misano World Circuit Marco Simoncelli this weekend for Round six of the Lamborghini Super Trofeo North America championship and the two-race World Finals event. The team’s five drivers split amongst three classes in PRO, PRO|AM, and AM will race against the best LST drivers in Europe and North America.

Over 60 drivers from around the word will take to the Misano World Circuit Marco Simoncelli circuit, a 2.262-mile, 16 turn track most known for hosting MotoGP.  The Prestige Performance with Wayne Taylor team, which Is sitting third and fourth In the Dealer and Team Championships respectively, will look to make their mark here as they enter the final race weekend of the season with 7 wins and 18 podiums.

Kyle Marcelli and Daniel Formal will co-drive the No. 101 Prestige Performance with Wayne Taylor Racing Lamborghini Super Trofeo. The co-drivers have overcome adversity to win three of the last four races in the 2021 season and currently sit fourth in the championship just three points out of third place and 24 points out of first.

Driver of the No. 125 Harrison Contracting with Wayne Taylor Racing LST, Ashton Harrison, is currently third in the AM Championship with only a 4-point deficit from second position and 17-point deficit to first position. The American’s 2021 season has been productive and impressive in her first year as a solo AM driver with two wins and seven podiums. Harrison’s last World Finals run ended with great success as she became the first woman to win a Lamborghini Super Trofeo World Finals race.

Jordan Missig, driver of the No. 153 Wayne Taylor Racing LST, has shown fantastic growth as a driver in the PRO|AM class where the Illinois native is in third place in the championship after missing Round 3 at Watkins Glen International due to a scheduling conflict with his other racing series. Missig has captured two wins and seven podiums in his first year in Lamborghini Super Trofeo. He will compete in the PRO|AM class for the final rounds of the Lamborghini Super Trofeo North America Championship and switch to PRO for the two World Finals races later in the weekend.

Randy Sellari, the 2020 LB Cup champion, driver of the No. 103 JG Wentworth with Wayne Taylor Racing LST, having moved up to the AM Class this season, enters the final round of the LST NA championship tied for fourth position. Sellari is looking forward to showcasing his consistent growth this year on the world stage.

Kyle Marcelli, No. 101 Prestige Performance with Wayne Taylor Racing Lamborghini Huracán Super Trofeo (PRO)"Our 2021 Lamborghini Super Trofeo campaign has been quite successful. We started the season with two podiums in the first four races at COTA and VIR. Then, had the wind knocked out of our sails at Watkins Glen. But as the saying goes "what doesn’t kill you makes you stronger” could not have been truer. We rebounded with three wins in the last four races at Road America and Laguna Seca. Every member of the Wayne Taylor Racing team has been operating at the top of their game and have played a key role in our success. As I look forward to the World Finals, I am excited. This will be my first world final event. I’m told the schedule is busy and the competition will be tough. That said, Danny and I have been working well together and I expect us to have the No. 101 Prestige Performance with Wayne Taylor Racing Lamborghini at the front of the grid."

“This is the last event of the season and it’s been a great season so far, especially the second half with three wins in four races and my first pole position. I’m incredibly grateful for this opportunity with Wayne Taylor Racing and Prestige Performance. They have become a part of my family and I want to give them the best result possible in Misano. Hopefully we can build on that and have a relationship for 2022 and keep on trying to win the championship in Lamborghini Super Trofeo. We still have a chance to win the championship mathematically and we are going to give it our all. Kyle and I are ready, we’ve been working together better than I ever expected. He’s become like a brother to me. I’m just super excited for the final event and ready to give it 100%.

“I can't believe we are at the end of the 2021 season. It’s hard to believe I'm closing out on my junior year of Lamborghini Super Trofeo. It has been a rewarding year and I'm looking forward to closing out the season with success at Misano. I expect the entire Wayne Taylor Racing team to be a strong group as we have been all year going into worlds. We were strong in 2019 and I'd like to imagine we are even better now. I am so thankful to my team; especially Travis, Shawn and Shishir for all the hard work they've put into our program. The 2019 Worlds Finals were good to me, and I have high expectations for myself leading into this year’s worlds event. I want that Lamborghini Worlds Title.”

“The season so far has been full of ups and downs. I am really thankful for a successful return to Wayne Taylor Racing during the 2021 season which has allowed me to continue my growth and ultimately make my debut in the AM category. Things haven’t been without hiccups or upsets but I’m proud of how I was able to jump back at different moments throughout the year. Ultimately, as a competitor you always go out wanting to achieve more but I can look back on this year and be proud of my improved pace in such an extremely competitive field. With this year being my 4th trip to a Super Trofeo World Finals (one year as a spectator and three years participating), I realize that anything can happen. It will be interesting to see where I stack up against the other competitors from around the world and as always, my sights are set on a podium. I’ve done quite a lot of sim work, so I feel ready for this challenge.”

“The 2021 season is sure one I will remember for a long time. Basically, has been a season full of trial by fire, but the good news is I really haven't been burned badly. In other words, it has been a really good first season for not being in the car until this year. I was able to capture my first podium in my first race out at COTA, then later collect two wins up at one of my favorite tracks in Road America, and most recently get another podium out west at Laguna Seca. So, to collect two wins and four podiums in eight races is something that I am really proud of how this season has turned out so far. But we are still not done, now the focus turns overseas to Italy to take part in the World Finals event where I will finish up the North America Season in Pro-Am before making the jump to the Pro Class for the world Finals event. I am beyond excited to finally get the opportunity to go race in Europe with some of the best Sports Car Drivers in the world, and I can't wait to take the fight to them. I have been putting a lot of hours and sim time to the Misano World Circuit and I hope it will help me get up to speed quickly when we get on track for the very first time. As always, I want to thank Wayne Taylor Racing for their outstanding efforts and support throughout the whole season and getting us all ready for the final race of the 2021 season.”