With the Prestige Performance with Wayne Taylor Racing stable of five drivers competing in four cars across three classes, the team took home a class win and five top-three finishes in the final two rounds of the North American series. The Prestige Performance | WTR team ended up third and fourth in the Dealer and Team Championships respectively, with 8 wins and 23 podiums on the season. 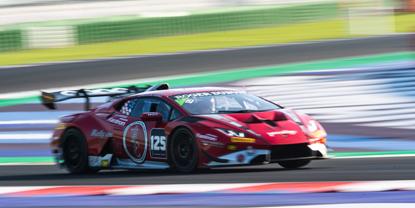 With the Prestige Performance with Wayne Taylor Racing stable of five drivers competing in four cars across three classes, the team took home a class win and five top-three finishes in the final two rounds of the North American series. The Prestige Performance | WTR team ended up third and fourth in the Dealer and Team Championships respectively, with 8 wins and 23 podiums on the season.

Kyle Marcelli and Daniel Formal started both races at the 16-turn, 4.064-kilometer circuit in fourth position. Marcelli fell to sixth at the start of Race 1, but pushed onward before coming in at the opening of the pit window to hand the No. 101 machine to Formal. After a pair of retirements ahead, Daniel delivered a fourth place finish. Race 2 saw Formal behind the wheel for the start, and he got away cleanly, maintaining fourth position. With precise work from the team in the pits, Kyle Marcelli took to the track, but had to stop on his outlap due to a fuel pressure issue. He got the car moving again and persevered to secure a top-10 overall finish and another fourth place finish in class for the team.

With the North America season complete, Marcelli and Formal secure fourth in the PRO driver’s championship, concluding a year that saw a dominant win at Laguna Seca and a sweep of both races at Road America.

Jordan Missig concluded his LST North America campaign with a hard-fought fourth position in Race 1, and a second place in Race 2. A flying start saw him take the lead of his class in the first race, running directly behind the PRO drivers. He defended well from an AM class competitor behind, relinquishing the overall position rather than fighting and losing time to the chasing PRO|AM pack. He entered the pits maintaining the class lead, but with single drivers required to take a three-second time penalty when they stop, he cycled out in second position. After a late caution, the field went green again for a one-lap dash to the finish. Jordan had his elbows out, running three-wide mid-lap, and swapping positions with P3 twice in as many corners before coming home P4 in class. In Race 2, he started cleanly, but spun early. He responded well, fighting his way back to end the North America season with a podium and another second-place finish.

Missig’s rookie season in sportscars ends with an impressive collection of hardware earned. After scoring a class podium in his debut back in May, he has shown consistent growth and improvement, adding two wins and five podiums to his growing resume en route to third place in the PRO|AM points standings.

Ashton Harrison had a thrilling weekend on track in her red Harrison Contracting No. 125 car. Race 1 was looking dire in the opening minutes as contact from a competitor left her limping back to the pits with a left rear tire puncture, but she recovered to secure a third-place podium for the team. Her fortunes reversed in Race 2, when a late mistake by the class leader allowed her to take the lead and despite contact on the final lap, win the race—her third of the year. This final victory helped Harrison secure second place in the AM points standings in her first season contesting in the class and her third LST campaign overall.

Randy Sellari ended his season in an emphatic fashion with a pair of podiums on the weekend, his best of the year. His second place in class in the first race ties his best race result of the season and his second podium in the final race was the result of a fast and consistent drive. With his first class podium at the final round on United States soil last month and another twoin Italy this weekend, Randy Sellari ends the 2021 campaign on a positive note. He finished fourth in the AM class points.

Before switching gears to the 2022 Lamborghini Super Trofeo Championship, the North American drivers will join their European counterparts on track for the World Final rounds tomorrow, October 30, and Sunday, October 31. The first race of the weekend begins tomorrow at 10:30 a.m. ET/4:30 p.m. CET. Tune in to Lamborghini Squadra Corse’s official YouTube channel for live streams of all four races.

“The first day of racing is complete here in Misano, Italy. We qualified fourth for both Race 1 and Race 2. All week, we seem to be really good on used tires, but struggled on new tires. We haven’t quite figured that out yet, but we started fourth and finished fourth in the first race. It was okay. We went back to the drawing board and made some changes for the second race and the pace was a little bit better for us. The car was a little bit happier. Unfortunately, we had a fuel pump issue that came up after the pitstop that stalled the car on the exit of the pitlane. We went down a lap, having to refire the car. After that, I was quite pleased with the balance. We were one of the quickest cars on track at the end of the race, but we weren’t in the race to fight. So we’ll put our heads together one more time. The guys here at Wayne Taylor Racing with Prestige Performance are working extremely hard, tweaking everything they can to give us more speed and improve the car. The competition is very strong. It’s been a long week. I know all the crew are tired, but tomorrow is the big day, the World Final. We’ll have the warmup, qualifying, Race 1 and Race 2 and we’ll be pushing one hundred percent to get this Prestige Performance machine up front.”

“Race 2 did not go as planned. I had a good start and was running P3, less than three seconds from the leader. It would’ve helped us in the pit stops because he’s a single driver. We had a great stop, changed drivers quickly, but we had a fuel pump issue that took us out of the race. We finished P4, but it wasn’t what we wanted. Thank you to Wayne Taylor Racing, Prestige Performance and Lamborghini Paramus. Tomorrow is World Final day and we’ll try and make America proud.”

“Today was overall a good day, Race 1 we showed great race pace getting out front and leading early. We messed up a little with the pit stop which dropped us back a spot to second before the SC came out, setting us up for a 1 lap shootout to decide it. It was a free for all and I came out on the wrong end of it going from P2 to P4. Race 2 had a bit more luck on my side. After getting not the greatest off starts I rallied back to finish the season off with at P2 finish. We now turn our focus to the world finals to bring WTR some more hardware home.”

“Super excited to get the win here in Misano for Race 2. What a great way to end the U.S. rounds. I can’t wait to compete in the World Final tomorrow with my teammate Jordan and hoping for a success for the entire Wayne Taylor Racing team. They really deserve it. It’s been a long week, but everyone has had a great attitude and everyone has been putting in great work. I’m so grateful for my car chief, Shawn, thankful for all the WTR mechanics who have busted their tails to get my car ready after having damage in Race 1 and Race 2. They’ve put in a lot of hard work and I’m so thankful for them and for Harrison Contracting for allowing me to do this. Looking forward to the rest of the weekend.”