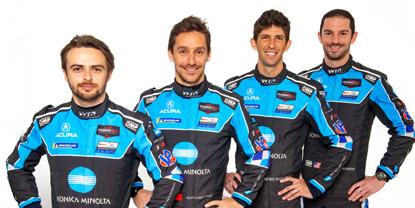 2021 Michelin Endurance Cup Champions and 2021 IMSA WeatherTech DPi Vice Champions Ricky Taylor and Filipe Albuquerque will return as full-time co-pilots of the No. 10 Konica Minolta Acura ARX-05 in 2022 with hopes of back-to-back wins at the 2022 Rolex 24 at Daytona. 2021 Michelin Endurance Cup Champion for WTR and standout INDYCAR pilot Alexander Rossi will once again assist the team as it looks to make history during this iconic 24-hour endurance battle of wits, stamina and strategy. Veteran driver from England and Rossi’s former Formula 1 teammate, Will Stevens, will join WTR as the team’s endurance co-driver at the Rolex 24 at DAYTONA, the Mobil 1 12 Hours of Sebring, and Motul Petit Le Mans for the 2022 season.

“I’m excited to finally announce our 2022 driver lineup for the full season, the Michelin Endurance Cup and for the Rolex 24 at DAYTONA,” expressed team owner Wayne Taylor.  “Each year, we speak with many drivers as we develop our driver lineup, and I feel very good to officially announce everyone. Ricky and Filipe will be back as full-time co-drivers. Continuity is always a good thing and both of them work really well together. We have Alexander Rossi joining us again. He did a great job with us last year helping us win the Rolex 24. Will Stevens will be running all Michelin Endurance Cup races for us. He’s been someone that we’ve been watching over the last year or two and gathering info on. Alex and he were teammates in Formula 1 years ago, so the drivers meshed very well at the recent two day test in Daytona where Will came up to speed very quickly. The most important thing is having everybody with the same goal which is to win. Thank you to Acura, HPD, Konica Minolta, Harrison Contracting and CIT who have all helped to make this happen and I can’t wait to get back to Daytona.”

Established in 2007, Wayne Taylor Racing has asserted itself as a perennial leading force in the IMSA WeatherTech SportsCar Championship. The 2021 Michelin Endurance Cup Champions have won threeIMSA Driver Championships and nine IMSA Manufacturer Titles since their formation. In the team’s 15 seasons, they have seized four of the last five Rolex 24 at DAYTONA titles, two 12 Hours of Sebring victories and three Petit Le Mans wins. The No. 10 Konica Minolta Acura ARX-05 team will look to make history by winning four Rolex 24 at DAYTONA events in a row with their exceptional driver line-up for 2022.

Ricky Taylor returns to Wayne Taylor Racing for the second consecutive year and his fifteenth season in topflight sports car racing. The IMSA veteran won the WeatherTech SportsCar Championship in 2017 and 2020 and brought his team within one corner of the overall title on their way to an Endurance Cup victory in 2021. Statistically one of the greatest drivers in IMSA history, Taylor boasts a record of 27 victories, 23 pole positions, and 64 podium finishes including wins at all the series’ marquee endurance events—the Rolex 24 at DAYTONA, the 12 Hours of Sebring, the Six Hours of the Glen and Petit Le Mans.

“2022 is going to be a fantastic season,” commented Ricky Taylor, the two-time IMSA WeatherTech SportsCar Champion. “WTR, Konica Minolta, Harrison Contracting and CIT came out of the gates so strongly with the ARX-05 in their first season running it, already fighting for a championship. Along with Filipe and Alex rejoining the team, we should have some really strong continuity moving into next season to keep building on our success with HPD and Acura. It’s also great having Will on board with us. He is a world class sportscar driver and we are lucky to have him join the team. He has already contributed greatly to the team, and I think our Rolex 24 lineup is as strong as ever. The competition will be tough with the addition of a second Ganassi Cadillac, but we will welcome it and look forward to fighting for another championship.”

Full time pilot Filipe Albuquerque continues his tenure with the No. 10 Konica Minolta Acura ARX-05 team for the 2022 IMSA WeatherTech SportsCar Championship. The 2021 FIA World Endurance Championship multiple race winner, 2020 European Le Mans Champion and LMP2 WEC Champion carries a resume as diverse as it is impressive. His 2021 run with WTR produced a trio of wins, including the Rolex 24 at DAYTONA, en route to the Endurance Cup title.

“The IMSA offseason break is not so long, especially this year, given that the last race was a bit later than normal,” said Filipe Albuquerque. “For someone that enjoys racing, as I do, that is great. I am looking forward to 2022 with my great teammate Ricky. Now that we have more experience with the No. 10 Konica Minolta Acura ARX-05, maybe we can grab that one extra point that made us miss the DPi title in 2021. We came off a fantastic test with the whole team a few weeks ago with Alex and our new team member Will Stevens, I am happy to have Will onboard. He has a lot of experience; we had many fights in the past in ELMS and WEC, so I know how good he is. I hope we can achieve many victories together.”

“I am thrilled to be returning to Daytona with Wayne Taylor Racing and Acura,” said Alexander Rossi. “It was such a privilege to be able to continue driving with Ricky for what was our third year together and the addition of Filipe couldn’t have gone any better as shown by the result that we were able to achieve last year. It is great to work again with Will Stevens as we were actually teammates back in our F1 days and we were able to get straight back to business after not seeing each other for six years. I can’t wait to get back to the track and hopefully deliver Wayne his 5th 24-hour win in 6 years."

Will Stevens is currently a Formula 1 Test & Development Driver for McLaren and a standout in the World Endurance Championship and European Le Mans Series. Will has held roles with various F1 teams dating back to 2008 and made his Grand Prix debut in 2014 before earning a full-time seat with Manor Marussia F1 Team for 2015. His recent career highlights include class wins in the World Endurance Championship and a runner-up campaign in the Blancpain GT Series.

“I’m super excited to join the Wayne Taylor Racing family and the IMSA WeatherTech SportsCar Championship for Daytona, Sebring and Petit Le Mans,” said Stevens. “This team is very respected and one that I’ve always wanted to be part of. IMSA Is a huge market in motorsport that is growing massively and it’s a relationship that I want to build on for the future. I have known Ricky, Filipe and Alexander a little bit over the past few years, so it’s nice to have that relationship already with the guys. It’s an honor to be part of this exceptional No. 10 Konica Minolta Acura ARX-05 team and to help with the success for this year.”

“We are very excited to start another season supporting WTR!” exclaimed Michael Mathe.” We are really thrilled with the driver line-up this year and look forward to many wins and to challenge for the IMSA WeatherTech DPi Championship.”

After a historic 2021, HPD looks forward to another year of victories with the No. 10 Konica Minolta Acura ARX-05 team.

“Winning both the Rolex 24 and the Michelin Endurance Cup last year were important milestones for Acura’s IMSA racing program,” said David Salters, President and Technical Director of Honda Performance Development, the North American racing arm for Acura Motorsports. “In just the first year of our association, Wayne Taylor Racing has proven to be an important partner in our IMSA effort, and the WTR driver lineup for 2022 is extraordinarily strong. It’s a great racing team, Wayne leads from the front and all our engineers just work well together and want to go racing. We look forward to seeing these very talented drivers in Victory Circle next year for Acura”

“I’m really glad that Harrison Contracting Company (HCC) is once again partnering with WTR and Konica Minolta because of the professionalism and winning spirit they possess,” said Bill Harrison, President and Co-Founder. “Our outlook at HCC is the same as WTR when it comes to quality and the desire to be the best we can be. The efforts on both sides are endless when striving to be number one. At HCC, we provide it through the painting and maintenance services, while WTR does it through racing—and we both do it by building lasting relationships. In our world of business, image is everything, and Wayne and Travis Houge (Vice President and General Manager of WTR) see things in the same fashion that we do here at HCC. The level of what they are providing, and the level of driver development we’ve experienced with Ashton Harrison, is a major part of our desire to reunite again this year with WTR and Konica Minolta. Likewise, working with Acura and Honda is another reason why we wanted to come back this year and rejoin the team. Working alongside their proven success worldwide, and their passion for supporting all levels in racing, helps us know that this is where we want to be on the manufacturer’s side.”

The 2022 season officially begins on January 21 at Daytona International Speedway for the annual Roar Before the 24 with the momentous Rolex 24 at DAYTONA immediately following. Practice begins on Thursday, January 27 with the race running January 29-30. The No. 10 Konica Minolta Acura ARX-05 will work to win a historic four 24-hour events in a row.