Wayne Taylor Racing (WTR) is proud to announce that Travis Houge has been promoted to Vice President, General Manager overseeing all commercial and technical operations for its internationally recognized motorsports organization. 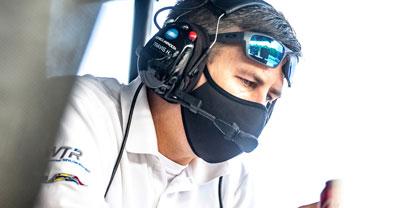 Wayne Taylor Racing (WTR) is proud to announce that Travis Houge has been promoted to Vice President, General Manager overseeing all commercial and technical operations for its internationally recognized motorsports organization. Since 2014, Houge has been instrumental in the company’s growth and innovation in both the IMSA WeatherTech Sports Car (DPi) Championship and Lamborghini Super Trofeo racing efforts while helping to ensure the sustainability of the company through the most recent economic challenges.

“Travis is a true testament to hard work and ingenuity,” said Taylor the three-time World SportsCar Champion who founded Wayne Taylor Racing in 2007. “He joined our company as crew chief at its inception 14 years ago, grew to the role of Team Manager and now oversees our entire operation. He uniquely knows what the team needs to be competitive, all the way to Victory Lane while having the skill and business acumen to grow Wayne Taylor Racing and its partners’ bottom line. He deserves this recognition.”

In 2014, Houge rose to Team Manager before moving into the role of General overseeing all operations of both the successful IMSA WeatherTech prototype program as well as the championship winning Super Trofeo driver development program. Before joining WTR, Houge worked with Target Chip Ganassi Racing’s Grand-Am program as a front-end assembly specialist and prior to that in the NHRA Drag Racing Series for Don Prudhomme Racing as a Pit Crew Mechanic, which included building and maintaining top fuel engines.

“I greatly appreciate Wayne’s commitment to me,” said Houge, who works closely with Taylor to ensure the advancements of all areas of the company’s operations. “In my opinion, Wayne Taylor Racing is at the pinnacle of sportscar racing in America. While incredibly competitive on the track, we have just as much competitive drive to see our partners use our sport to further their own financial and marketing goals. We have a bright future.”