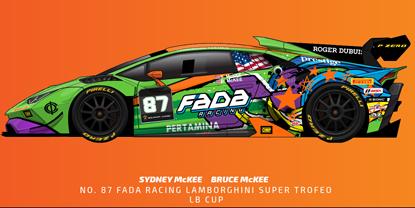 Sydney McKee, a third-year student at Brown University double majoring in Engineering and Economics, has enjoyed a unique pathway into the sport. In high school, she built her own Spec Miata race car to compete in the 2017 Spec Miata class with the National Auto Sport Association. In 2018, Sydney teamed up with her father to create FaDa Racing. The pair claimed top honors in the GT4 class Trophy East team championship, along with a fourth-place finish in the individual championship.

“Last year my dad and I jumped into IMSA by racing in the 2019 Michelin Pilot Challenge season opener at Daytona International Speedway,” an excited Sydney McKee outlined. “It was an incredible experience, but it was a whirlwind as we were thrown into a new car for one race. This year is a really great opportunity for to spend an entire season with Wayne Taylor Racing, developing as drivers and learning an entirely new car. It is a huge step up. Having real downforce is brand new for us and being able to learn at a variety of historic racetracks is an amazing experience for my driver development. I’m very excited to get this season started in the No. 87 FaDa Racing Lamborghini Super Trofeo!”

Bruce McKee began racing sportscars four years ago. In his first year of amateur racing in 2016, he won the R2 Championship in the southeast PBOC Series with ten victories. The following season, he graduated to the ‘PRO’ class of the Trophy East series where he finished second in the championship with two first-place finishes.

“This year we decided to step up to a car unlike anything we have raced before,” said McKee. “In conjunction with that move, we wanted to step up to a team that has all of the tools, experience and resources to help us make that jump. I’m very excited to continue to race with my daughter, and to race with the likes of Wayne Taylor Racing is incredible and exactly what we need to hopefully achieve some success at this higher level.”

Throughout the team’s involvement in Lamborghini Super Trofeo North America series, Prestige Performance with Wayne Taylor Racing has secured seven PRO-driver, Team and Dealer Championship titles. Wayne Taylor Racing has finished in the top-five in the Dealer and Team Championships in the PRO, PRO-AM, AM, and LB Cup categories in both 2018 and 2019.

“It’s great to have Bruce and Sydney join our team. As is WTR, they’re truly a family that races together. We’re excited to watch them succeed and stand on the top of the podium together,” commented Travis Houge, General Manager, Wayne Taylor Racing. “We are all looking forward to getting the season started at Watkins Glen. We greatly appreciate everyone at IMSA and Lamborghini's Chris Ward's (Senior VP, Motorsports) tireless efforts to not only get us back racing, but at such exciting venues as Road America.”

The 2020 Lamborghini Super Trofeo season will now begin at Watkins Glen International on June 25 and will conclude at the Lamborghini World Finals in Misano, Italy on October 31.