Danny Formal and Kyle Marcelli will co-pilot the No. 1 Prestige Performance with Wayne Taylor Racing Lamborghini Huracán Super Trofeo (PRO) in the 6-race North American PRO Series which kicks off May 21st during the NASCAR headliner event at Circuit of the Americas (COTA) and finishes up at the 2021 World Final weekend at Misano Adriatico, Italy on October 30th -31st. 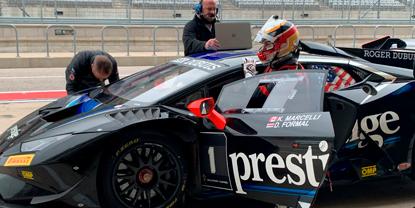 Coming off a successful, two-day test at the Circuit of the Americas, Wayne Taylor Racing (WTR) and Prestige Performance Racing announced their driver line-up for the 2021 Lamborghini Super Trofeo (LST) North American Championship season. Danny Formal and Kyle Marcelli will co-pilot the No. 1 Prestige Performance with Wayne Taylor Racing Lamborghini Huracán Super Trofeo (PRO) in the 6-race North American PRO Series which kicks off May 21st during the NASCAR headliner event at Circuit of the Americas (COTA) and finishes up at the 2021 World Final weekend at Misano Adriatico, Italy on October 30th -31st.

“As we enter our sixth year, the partnership and legacy that Prestige Performance and Wayne Taylor Racing have built in the Lamborghini Super Trofeo North America Series is second to none,” said Chris Turner, President, Prestige Performance Racing. “We have done it successfully season after season and are looking to come out even stronger in 2021.”

“It’s a dream come true for me,” said Danny Formal. “I have been following Wayne Taylor Racing for the longest time. To get an opportunity to race with a prestigious team like them and also represent Prestige Performance is an incredibly opportunity. I’m super grateful for this. I will give my best starting this weekend with our first test until the end of this year. Hopefully we can bring some great results for the team and fight for the championship.”

“I have always admired WTR and the benchmark they set on and off track, said Kyle Marcelli. "The team has all the tools and resources a driver needs and I hope extract the most from those resources to deliver the winning results we all want and expect. The Lamborghini Super Trofeo is a new car to me and I look forward to the challenge of learning it’s characteristics. I am grateful for the opportunity and excited to get to work.”

Since its inception in 2015, the Prestige Performance with Wayne Taylor Racing effort has clinched seven North American PRO-Driver, Team and Dealer Championship titles, experienced the first woman World Finals race winner and was crowned the overall 2017 Lamborghini Champions at the World Finals in Imola, Italy. In 2020, the team finished the season in the Top-Three in the Team Championship, PRO-AM and LB Cup classes and fourth in the PRO Class. Prestige Performance-Paramus finished second overall in the 2020 Dealer Championship chase.

To complete the 2021 Wayne Taylor Racing Lamborghini Super Trofeo stable, veterans Ashton Harrison will run solo in the AM Class in her No. 25 Harrison Contracting LST entry while 2020 LB Cup Champion Randy Sellari returns to the WTR fold in his No. 03 J.G. Wentworth LST, also running in the AM class.

“We are excited to get back to what hopes to be a regular season for us all,” said Travis Houge, Vice President | General Manager of Wayne Taylor Racing. “We welcome Danny and Kyle to our group and are delighted to have Ashton and Randy back with us for the season. We still have plans to field a fourth car and hope to have news on that shortly. It is going to be a great season!”

After the season opener at COTA (May 21-23), the 6-race North American series continues with races at Watkins Glen (June 24-27), Road America (August 6-8), WeatherTech Raceway Laguna Seca (September 10-12) and Virginia International Raceway (October 8-10). The final races of the series will be held during The World Finals scheduled at the Misano Adriatico, Italy, October 28-31.