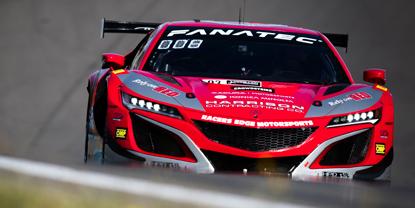 Nielsen won the Grand Touring Daytona (GTD) IMSA WeatherTech SportsCar Championship title in both 2016 and 2017, tallying over 14 podium finishes and her first IMSA victory during that time period. She has competed in GT World Challenge Asia and the Intercontinental GT Challenge (IGTC), and drove the Acura NSX GT3 in 2019 under the Meyer-Shank Racing/Heinricher Racing sponsored by Caterpillar banner.

“I’m super excited to be joining Racers Edge Motorsports, Ashton and Mario at the Indianapolis 8-hour event,” said Nielsen. “I was lucky enough to join the team at one of the HPD Driver Academy events and it was amazing to be back behind the wheel of the Acura GT3 NSX.”

“(The HPD Driver Academy) was my first time at Indy so it was nice to get familiar with the track and shake off the rust. I had a great first impression of the team; they have a super nice environment to work within and are also professional so that makes me even more excited for the race. The whole team has had a strong performance this season, so I feel very lucky that I get to join and support such a strong effort.”

“With the championship at stake, it’s critical to bring in just the right driver to join the lineup for the season finale where three drivers are required,” team owner Jon Mirachi added. “Christina has the right experience and the speed we need to help us go for the win and the championship. I couldn’t think of a better choice, and we’re excited to have her behind the wheel!”

The 2022 Fanatec GT World Challenge America powered by AWS season culminates at The Racing Capital of The World on Saturday, October 8 for Round 13, joining the Intercontinental GT Challenge powered by Pirelli field for this endurance race.

Boosted by back to back wins at Road America, Harrison and Farnbacher currently sit second in the Pro-Am standings, just two points from first place. There are two rounds at Sebring International Raceway next on the calendar, followed by the Indy 8-hr event which awards double points in the championship battle.

Wayne Taylor Racing (WTR) was founded in 2007 by world renowned sports car champion Wayne Taylor. Based in Indianapolis, Indiana, the motorsports capital of the world, WTR has built a proven track record of success and ingenuity in both the IMSA WeatherTech SportsCar Championship Prototype class and the North America Lamborghini Super Trofeo series. Known for their prowess in endurance racing, WTR has won the coveted Rolex 24 at Daytona four times in the last five years and were named Vice Champions of the IMSA WeatherTech DPi Championship and Champions of the Michelin Endurance Cup in both 2020 and 2021. WTR has also won eight North America Lamborghini Super Trofeo Champions and fielded the only woman to win a Lamborghini World Finals race twice. Wayne Taylor has been inducted into both the South Africa Hall of Fame and the Sebring International Raceway Hall.

About the HPD Driver Academy Program:

Honda Performance Development, Inc., (HPD) has a rich heritage creating, manufacturing, and supporting Honda Racing and Acura Motorsports customers since 1993.  From pinnacle racing in INDYCAR and IMSA to commercial racing programs, HPD powers the dreams of professional and amateur racers from age 4 to 40+. HPD is a wholly owned subsidiary of American Honda Motor Co., Inc. and leads all of Honda and Acura’s high-performance racing programs in North America.  HPD specializes in the design and development of race engines, chassis and performance parts, as well as technical and race support. HPD offers parts and race support to Honda and Acura amateur and professional motorsports racers, and is continually expanding its palette of racing programs that make Honda racing products available to all racing styles.