The WeatherTech Championship will return July 4 at Daytona International Speedway. This Fourth of July event will feature an evening race with WeatherTech as its entitlement partner and a live television broadcast on NBCSN. 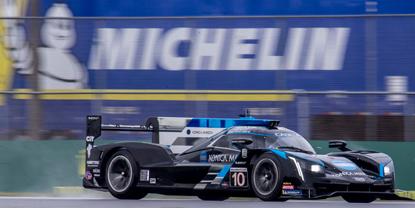 DAYTONA BEACH, Fla. (May 15, 2020) – In a series of video conferences with stakeholders earlier today, IMSA revealed its plans to return to racing this summer with a revised 2020 calendar for the IMSA WeatherTech SportsCar Championship and the IMSA Michelin Pilot Challenge.

“IMSA is grateful to all of our promoter partners for collaborating with us to develop a revised schedule of outstanding events,” said IMSA President John Doonan. “Our No. 1 priority since March has been to get back to racing as safely and as quickly as possible, and this revised schedule is evidence of that. We appreciate the patience, cooperation, and input of our IMSA stakeholders, and we all are very much looking forward to going racing again this summer and putting on amazing races for our audience.”

Given their dominant victory at the Rolex 24 At Daytona earlier this season, Renger van der Zande, Ryan Briscoe and the No 10 Konica Minolta Cadillac DPi team are looking forward to returning to the race track to defned their lead in the the IMSA WeatherTech SportsCar Championship (DPi).

Super Trofeo North America competitors will find themselves competing at several major racing weekends, the first being at Road America during the NASCAR Xfinity Series event on Aug. 7-9. This change in the schedule was announced in April when the series’ original season-opening weekend – the Grand Prix of Alabama at Barber Motorsports Park – was postponed and subsequently canceled.

Super Trofeo North America then will run a pair of races at WeatherTech Raceway Laguna Seca on Sept. 4-6 when the IMSA WeatherTech SportsCar Championship heads west for its annual race at the Monterey, California-circuit.

The series remains alongside the WeatherTech Championship and other IMSA series for its next event weekend at Watkins Glen International on the event’s new date, Oct. 2-4.

A new venue for Super Trofeo North America – the Streets of St. Petersburg – will host the series on Oct. 23-25 as part of the Grand Prix of St. Petersburg. The series was initially slated to compete at the Honda Indy Toronto for the first time this July but will trade street-circuit events.

Rounds 9 and 10 will bring Super Trofeo North America back to the iconic Mobil 1 Twelve Hours of Sebring Presented by Advance Auto Parts event weekend. Rescheduled for Nov. 13-15, the weekend will close out the WeatherTech Championship season and other IMSA series at the historic Sebring International Raceway.

For the latest schedules for all IMSA series, visit www.imsa.com.