Harrison and Amici Team Up In 2020

Ashton Harrison and Andrea Amici will join forces in the PRO-AM class for the 2020 Lamborghini Super Trofeo North America Championship season competing once again under the umbrella of the multi-championship winning Prestige Performance with Wayne Taylor Racing organization. 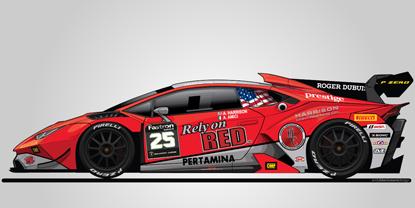 Ashton Harrison and Andrea Amici will join forces in the PRO-AM class for the 2020 Lamborghini Super Trofeo North America Championship season competing once again under the umbrella of the multi-championship winning Prestige Performance with Wayne Taylor Racing organization.

Harrison and Amici’s 2020 effort will be supported by Harrison Contracting, a painting and facility maintenance company servicing entities across the United States. Paying homage to the company’s 25th anniversary celebration, the dynamic duo will proudly pilot the No. 25 Harrison Contracting Lamborghini Super Trofeo during the 2020 North American LST season.

Earlier today, the striking new livery of the No. 25 Lamborghini ST was unveiled at Harrison Contracting Company’s Georgia Headquarters as part of the company’s annual “Safety Day”. In attendance were employees, vendors, and strategic partners from across the US, gathered to enhance safety awareness and education. The livery design, including the bright red base, metallic silver highlights, and even the car number pay homage to the company’s “Rely on RED” culture (Reliable, Experienced and Diligent) and 25th anniversary celebration. Look for the RED as Harrison and Amici power through the iconic sportscar tracks across North America, Toronto, Canada, and the World Finals in Italy.

"I am so excited to be back with Prestige Performance with Wayne Taylor Racing for the 2020 Lamborghini Super Trofeo North America Championship season and to be working with Andrea Amici in the PRO-AM class,” said Harrison, who made history last season when she became the first female winner of a Lamborghini Super Trofeo World Finals race. “It feels like the natural progression to move out of the LB Cup to the PRO-AM class. Andrea is extremely familiar with Lamborghinis and always has a positive attitude which is a huge part for a successful team. Last year was a successful season for Harrison Contracting and me. Finishing the year second overall in the LB Cup, we learned a lot and feel that we're in a good spot for an exciting 2020 season ahead. "

In 2019, Andrea Amici and teammate Sandy Mitchell battled in the hotly contested North American PRO Class championship and, despite racking up three wins and three poles, ended third for the season. In what was perhaps the most dramatic ending to the World Finals weekend, Amici and Mitchell tied in points with Target Racing’s Frederik Schandorff for the PRO Class title. Though each team had secured one class pole, victory and second place, after much review, Schandorff was named champion due to his six wins to Amici and Mitchell’s three in their 2019 regional championships.

“I’m very happy to continue my collaboration with Prestige Performance with Wayne Taylor Racing for the 2020 season,” said the 26-year old Italian. “We experienced a great season last year and to have continuity within a program in racing is always a big deal. This year I’m racing with my new partner, Ashton Harrison. I saw a great talent in Ashton last year. We’ll work hard to achieve a super result and bring maximum prestige to the team. I can’t wait to start.”

The Prestige Performance with Wayne Taylor Racing effort has clinched seven North American PRO-Driver, Team and Dealer Championship titles since the team’s initial foray into the Lamborghini Super Trofeo in 2015. The team has finished in the top-five in the Dealer and Team Championships in the PRO, PRO-AM, AM, and LB Cup classes in 2018 and 2019.

“It’s great news to have Harrison Contracting return to the team as the primary sponsor of the No. 25 Harrison Contracting Lamborghini Super Trofeo car,” commented Travis Houge, General Manager, Wayne Taylor Racing on the announcement. “Ashton Harrison and Andrea Amici showed huge potential in their respective classes last year, so I’m especially looking forward for them to move to the PRO-AM class and fight for a championship together.”

The 2020 season will begin at Barber Motorsports Park for a second consecutive year on April 3 – 5 during the Honda Indy Grand Prix of Alabama with the World Finals ending at the historic Misano World Circuit in Italy, October 29 – 30.