GTP Gets Rolling at the ROAR 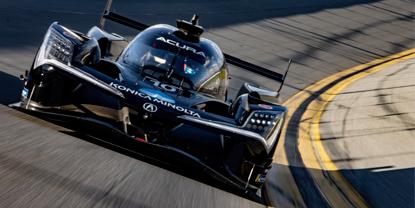 Wayne Taylor Racing (WTR) with Andretti Autosport’s No. 10 Konica Minolta Acura ARX-06 hits the track this weekend for the Roar Before the Rolex 24. The event is comprised of the first competitive testing sessions of the IMSA WeatherTech SportsCar Championship GTP era and capped by a traditional qualifying session on Sunday afternoon to set the grid for the 2023 Rolex 24 At DAYTONA. WTRAndretti has won the Rolex four times in the past six years, and is focused on continuing that run of success in a totally new era that resets the sport and has attracted the largest and most diverse prototype field in years.

“The whole team can’t wait to get to the Roar,” said Ricky Taylor, who helped qualify the No. 10 Konica Minolta Acura on pole for the 2022 Rolex 24 At DAYTONA. “We have all enjoyed the development phase and the process of building this beautiful car with Wayne Taylor Racing with Andretti Autosport, HPD and Oreca. At the end of the day, we are all competitors, so we are ultimately the most excited when we get to compete. The Roar will be the first time we get to truly test ourselves and battle for the pole for the Rolex 24 in our all-new, electrified Acura machinery, and that is incredibly exciting.”

“The new era is just starting,” said Filipe Albuquerque, who also drove a stint in the pole-winning qualifying race effort in 2022. “We have been testing the new car a lot. It’s a great regulation that is being introduced, the car is very exciting to drive and we just can’t wait to start. Less than a week to go—I’ve been so engaged by the process of developing a car with my teammates. We can’t wait to see what all the other manufacturers brought and what ideas they have. It’s a new program with the hybrid engine and qualifying will be different than past years at the Roar. With a combustion engine, we were solely focused on the balance of the car, but now with a new chassis there are other concerns and priorities. I’m training hard and as excited as I was when I started karting!”

“I’m really excited for the Rolex 24 At DAYTONA!” said Louis Delétraz, 2022 ELMS Champion. “It’s a new category, new cars, new opponents, and the first time with our new partners Andretti Autosport. So many things to look forward to, and it’s the culmination of so much testing and development. The whole team, Acura and HPD have worked hard the last few months and we still have a lot to do and learn, but I feel ready. I can’t wait to get back behind the wheel of the Acura ARX-06.”

“I have had a really nice break back in New Zealand with family,” said 2022 WEC Hypercar Champion, Brendon Hartley. “As much as I have enjoyed it, I’m looking forward to getting back to the racetrack. It’s going to be exciting to see all the new cars lined up at the Roar heading into the new era of sports car racing. I’m so pleased to be joining WTRAndretti and Acura. They know how to win this race and I feel as though I’ve fit right into the team together with Ricky, Filipe, and Louis. I have had a little track time in the car already and feel we are well prepared to tackle the week at Daytona.”

“We’re excited to go to the Roar and it’s the first time the world will see the new partnership between Wayne Taylor Racing and Andretti Autosport,” said six-time Rolex 24 At DAYTONA winner, Wayne Taylor. “HPD has been working so hard behind the scenes and our team has been working flat out. There have been supply chain issues and hurdles, but we are ready to go to put the car on the track. We’ll use the practices to prepare for qualifying and understand the electronics even better. We’ve done as much testing as possible, but you always want more. The Roar will be a bit of a test, and we’ll go as hard as we can for qualifying and see where we come out.

“We’ll be running a GTD car as part of the Wayne Taylor Racing with Andretti Autosport team, with John Mirachi and Racers Edge Motorsports. Ashton Harrison, Ryan Briscoe, Danny Formal and Kyle Marcelli are a great lineup and it’s nice to have to be competing in two different classes with two chances to win! Having Harrison Contracting Company sponsor the car is great for our team and for them, and I couldn’t be more excited.”

The Roar Before the 24, the qualifying event for the 2023 Rolex 24 At DAYTONA, runs January 20th-22nd with qualifying at 1:25 p.m. ET on the 22nd. Full coverage can be streamed on IMSA.TV starting at 1:20 p.m. ET. Practice for the Rolex 24 starts on January 26th, with the green flag for the legendary endurance race waving on the 28th at 1:40 p.m. Live coverage is available on Peacock for the full 24-hour cycle, alternate coverage on USA Network, and the final hours and victory celebrations available on NBC starting at 12:00 p.m. ET on the 29th.

Konica Minolta Business Solutions U.S.A., Inc. is reshaping and revolutionizing the workplace to achieve true connectivity through the Intelligent Connected Workplace. The company guides and supports its clients’ digital transformation through its expansive office technology portfolio, including IT Services (All Covered), intelligent information management, managed print services and industrial and commercial print solutions. Konica Minolta has been included on CRN’s MSP 500 list nine times and The World Technology Awards named the company a finalist in the IT Software category. Konica Minolta has been recognized as the #1 Brand for Customer Loyalty in the MFP Office Copier Market by Brand Keys for fifteen consecutive years, and is proud to be ranked on the Forbes 2021 America's Best-in-State employers list. The company received Keypoint Intelligence’s BLI 2021 A3 Line of The Year Award and BLI 2021-2023 Most Color Consistent A3 Brand Award for its bizhub i-Series. Konica Minolta, Inc. has been named to the Dow Jones Sustainability World Index for nine consecutive years and has spent four years on the Global 100 Most Sustainable Corporations in the World list. The company recognizes 150 years in global business in 2023. Konica Minolta partners with its clients to give shape to ideas and works to bring value to our society. For more information, please visit us online and follow Konica Minolta on Facebook, YouTube, LinkedIn and Twitter.