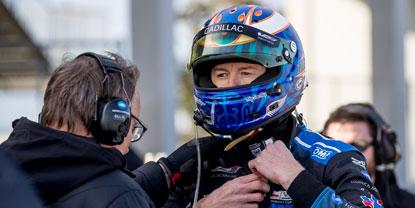 Dixon will rejoin full-season co-drivers Renger van der Zande and Ryan Briscoe and Renger for the 2020 Motul Petit Le Mans, October 17th and the Mobil 1 Twelve Hours of Sebring, November 14th. Earlier this year, the trio, along with teammate Kamui Kobayashi, drove to a resounding victory at the 58th Rolex 24 At DAYTONA. The No. 10 Konica Minolta Cadillac DPi-V.R team broke the previous 24-hour distance record at Daytona International Speedway by completing 833 laps for a total of 2,965.5 miles. This was the team’s third victory at the Rolex 24 At DAYTONA in the past four years.

“Having had Scott Dixon drive for us at Daytona at the beginning of the year with such success, it is wonderful to have him back with us for Petit Le Mans as well as the IMSA season finale in Sebring,” said Team Owner, Wayne Taylor. “He’s truly one of the greatest drivers that I have been around. He says very little, but when he says something everybody listens. With the start of the year so successful, coming right out of the box and winning, it is important to have Scott on our team to end the season with these two important races.”

Scott Dixon is about to begin his 20th season in the NTT INDYCAR Series, the last 18 seasons all being with Chip Ganassi Racing. The five-time series champion and 2008 Indianapolis 500 winner is the third-winningest driver in series history with 46 wins and 115 podium finishes.

“I’m really happy to be able to run Petit Le Mans and Sebring with Wayne Taylor Racing,” said Scott Dixon. “I’m glad that there were no conflicts with the changes in the racing schedules. I’m stoked to get back to racing on the IndyCar side soon and also to finish out the season on the IMSA side as well. We kicked off the year in the best way possible by winning the Rolex 24, so hopefully we can use that momentum to finish strong with the final two races of the seson.”

The 39-year-old from New Zealand has competed in 37 sportscar races, having one overall and two class podiums at 10-hour Petit Le Mans event along with one overall top-five and three top-five finishes at the 12 Hours of Sebring. Though the No. 10 Konica Minolta Cadillac DPi-V.R team has historically finished well at Road Atlanta with two victories and four podiums and at Sebring International Raceway with one win and three podiums, Dixon will bring additional heavy arsenal to the team as it battles for 22 hours in two of the most relentless and competitive endurance races of the season.

“The world has gone through such a tough time with so much change,” continued Taylor. “As a team, we have much to be thankful for. Our partners have been so supportive and have enabled me to look after my team. Rick Taylor, CEO & President, and Michael Mathe, Senior Vice-President, International Sales from Konica Minolta, Mark Reuss, President of General Motors, Steve Carlisle, President of Cadillac, Mark Kent, General Motors Director of Motorsports Competition Group, Rory Harvey, Vice President Sales, Service and Marketing at Cadillac and the head personnel from CIT and AMETEK have been so very supportive through this tough time.”

The 2020 WeatherTech SportsCar Championship resumes July 4th weekend with Ryan Briscoe and Renger van der Zande piloting the No. 10 Konica Minolta Cadillac DPi-V.R at Daytona International Speedway in a two hour and 40 minute sprint race around the 3.56-mile.  The IMSA WeatherTech 240 at Daytona race event will be carried live at 6pm ET on NBCSN on July 4, 2020.