At the annual season finale, the Prestige Performance | Wayne Taylor Racing team and drivers contested in battle after battle in an attempt to win the final races and championship titles in the Lamborghini Super Trofeo Round 6 and World Finals. 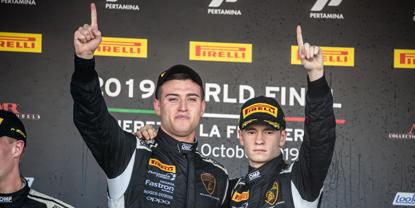 At the annual season finale, the Prestige Performance | Wayne Taylor Racing team and drivers contested in battle after battle in an attempt to win the final races and championship titles in the Lamborghini Super Trofeo Round 6 and World Finals.  All seven drivers in their respective classes competed in front of thousands of spectators and with more than 50 cars from around the world at the Jerez de la Frontera circuit in Spain.

In another strong showing for the team, Prestige Performance |WTR drivers finished the final rounds of the North American Lamborghini series with one win, two poles, five Top 3 and five Top 5 finishes. Each driver finished in the Top Three of their respective Driver Championships as well as helped Prestige Performance of Paramus and Wayne Taylor Racing claim second and third respectively in the Dealer and Team Championships:

In a dramatic ending to the World Finals weekend, Prestige Performance | Wayne Taylor Racing’s Sandy Mitchell and Andrea Amici tied in points with Target Racing’s Frederik Schandorff for the PRO Class title. Each team had secured one class pole, victory and second place, but after much review, Schandorff was named champion due to his six wins to Amici and Mitchell’s three in their 2019 regional championships.

Ashton Harrison made history becoming the first female winner of a Super Trofeo World Finals race. Though an on-track incident retired her No. 143 Huracan early in Race 1, Harrison started pole and went on to dominate Race 2. She took the win in LB Cup and finished 5th overall in the race.

Cameron Cassels held his own over the weekend but his No. 133 LST could not keep pace with Steven Aghakhani who was a dominant force in the AM Class, taking home both pole positions and both victories with relative ease.

In the PRO|AM category, William Hubbell and Eric Curran had a challenging weekend, finishing seventh and ninth place while Karol Basz and Andrezej Lewandowski won the title with both race victories.

Round 1 of the 2020 North America Lamborghini Super Trofeo series begins in early April at Barber Motorsports Park and ends in late October with World Finals in Misano, Italy.