Strategy Call at the Start by Konica Minolta Cadillac DPi-V.R Team Pays Early Dividends but Not Much More Despite Another Flawless Run 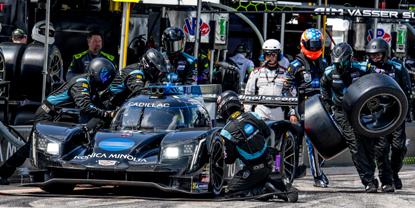 Sunday’s IMSA Road Race Showcase was a two-hour, 40-minute WeatherTech SportsCar Championship event that covered 83 laps around the longest circuit on the calendar. But for the No. 10 Konica Minolta Cadillac DPi-V.R duo of Jordan Taylor and Renger van der Zande, who brought home their fourth top-five finish of the season, the suspense and drama turned out to be over by the time the 35-car field successfully negotiated turns one, two, three, four and five of the mammoth but scenic 4.048-mile, 14-turn Road America layout in Elkhart Lake, Wisconsin – on the opening lap of the race.

Having qualified eighth Saturday at the hands of van der Zande, the team opted to start the race on a fresh set of Michelin tires rather than the set used during qualifying as mandated in the IMSA rulebook. The penalty for starting on different tires meant the No. 10 Konica Minolta Cadillac DPi-V.R had to start the race from the back of its class. It was just a two-position drop in starting position, but the fresh tires proved to be worth their weight in gold for van der Zande, relatively speaking, as they enabled him to jump from 10th to sixth place in the opening five turns of the race.

And that was pretty much all she wrote, less than a minute and less than half a lap into a race that went green from start to finish. With no chance of capitalizing on the strategy calls presented by the usually inevitable caution periods, combined with a pair of Mazdas and Acuras that continued the series domination they’ve enjoyed since early spring, all that was left to do was to focus on execution and hope for the best.

Both van der Zande and Taylor drove perfect stints. Both led a pair of laps apiece as the field cycled through fuel-and-tire stops midway through the race while stretching their fuel further than the others. And they were able to finish ahead of one of the Acuras, which needed to make extra stops to repair damage from contact with GT-class competitors, but behind the No. 31 Action Express Racing Cadillac DPi-V.R of Felipe Nasr and Pipo Derani, which finished fourth behind the two Mazdas and the other Acura.

“We had a great start,” van der Zande said. “We chose to go to the back of the grid with new tires. It was the right call because we went from last to sixth within five corners. That was really fun and it really determined the outcome for us because, after that, we never had any yellows and we never had any strategy calls to make. We started to save fuel, which helped a little bit in case there were going to be some calls to make, but we never got a yellow. I think, altogether, it’s very clear what’s missing. It’s very frustrating and also hard to explain to the fans why we are optimizing our performance but not winning trophies. I hope something can be properly done for that because it’s been too long since we’ve been fighting for the podium.”

Once they worked their way into the top-six, and then into the top-five, Taylor and van der Zande were rarely within striking distance of the No. 31 Cadillac DPi-V.R, nor threatened from behind by the sixth-place-finishing No. 5 Action Express racing Cadillac DPi-V.R of Filipe Albuquerque and Joao Barbosa.

“For us, it was pretty much a flawless race, strategy-wise,” Taylor said. “We decided to take new tires and start at the back, and Renger had a great start – jumped from 10th to sixth – and that was pretty much the entire race. He made no mistakes, I made no mistakes, the strategy was pretty straightforward, and the guys had good stops. So, I think we can leave here kind of happy with the performance, disappointed with the result, and go to Laguna hoping to be a little bit more competitive.”

Today's victory was the third in a row by a Team Joest Mazda. Finishing second was the championship-leading No. 6 Team Penske Acura of Dane Cameron and Juan Montoya.

The penultimate round of the 2019 IMSA WeatherTech SportsCar Championship is Sept. 15 at WeatherTech Raceway Laguna Seca near Monterey, California. The race will be televised live by NBC beginning at 3 p.m. EDT.