Fresh off their purely flawless race-day performance in last Sunday’s six-hour endurance marathon at Watkins Glen (N.Y.) International that netted no better than a fourth-place finish, the No. 10 Konica Minolta Cadillac DPi-V.R duo of Jordan Taylor and Renger van der Zande get right back at it as they make their annual trek north of the border for this weekend’s Mobil 1 SportsCar Grand Prix at Canadian Tire Motorsport Park in Bowmanville, Ontario. 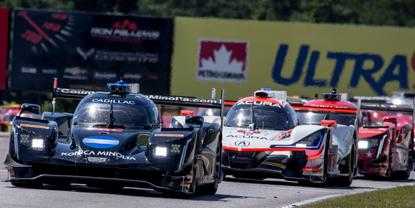 Fresh off their purely flawless race-day performance in last Sunday’s six-hour endurance marathon at Watkins Glen (N.Y.) International that netted no better than a fourth-place finish, the No. 10 Konica Minolta Cadillac DPi-V.R duo of Jordan Taylor and Renger van der Zande get right back at it as they make their annual trek north of the border for this weekend’s Mobil 1 SportsCar Grand Prix at Canadian Tire Motorsport Park in Bowmanville, Ontario.

While the payoff for last weekend’s trouble-free run at The Glen didn’t seem to be nearly enough, this weekend’s round seven of the 2019 IMSA WeatherTech SportsCar Championship comes at the lightning-fast 2.459-mile, 10-turn road course about an hour’s drive north and east of Toronto where the Konica Minolta Cadillac DPi-V.R team has enjoyed some of its most successful race weekends since first visiting there in 2014.

Last year’s much-needed runner-up finish at Bowmanville – featuring a race-high 71 laps led by Taylor and van der Zande – was the team’s fourth podium finish in five visits there. A 2015 victory from the pole by Taylor and his older brother Ricky Taylor was sandwiched by third-place finishes by the Taylor brothers in 2014 and 2016. Another victory in the 2017 event appeared to be imminent as the Taylor brothers led another race-high 73 laps before an incident in the closing laps relegated them to a seventh-place finish.

Taylor and van der Zande’s first race together last year at the Canadian track originally known as Mosport Park was almost magical, as van der Zande drove to the lead for the final 18 laps of his opening stint, and Taylor promptly led 53 of the first 55 laps of his closing stint. But the pace of the No. 10 Konica Minolta Cadillac DPi-V.R proved to be no match for polesitter Colin Braun and the Core Autosport LMP2 car, which came from the back of the starting grid and passed Taylor with nine laps to go and went on to win by a 3.4-second margin.

This weekend’s goal will be to go one better and take a huge chunk out of the 14-point deficit to the championship leaders. It would certainly be much to the delight of team technical director Brian Pillar, the native of nearby Aliston, Ontario who will be operating once again at his home event, as well as partner Konica Minolta, which annually brings one of its largest guest contingents to the racetrack. And more often than not the team has given them plenty to cheer about.

Practice for the Mobil 1 SportsCar Grand Prix begins Friday morning with DPi-class qualifying set for 12:25 p.m. EDT Saturday with live streaming video via IMSA.tv and the IMSA Mobile App beginning at 11:25 a.m. The green flag for Sunday’s two-hour, 40-minute race flies at 1:05 p.m. with television coverage by the NBC broadcast network beginning at 1 p.m. Live timing and scoring during all on-track sessions is available at IMSA.com and via the IMSA smartphone app.

After your trouble-free day at Watkins Glen netted a fourth-place finish last weekend, you’re headed to Canadian Tire Motorsport Park (aka “Mosport”), where you led the most laps and finished second last year. Your thoughts?

“We’re looking forward to going back to Mosport this week. Last year, we had a great car and led most of the race. Unfortunately, we got passed right at the end. But every year we go back there, we’ve got strong car, and I believe this year should be no different.”

How would you describe the track, and how do you like the racing there?

“We always love going back to Canada. Konica Minolta has a huge group of people there who come out and support us for the event, which gives us a huge boost. We’ve had a win and a few other podiums there, so hopefully we can get back to the top step this year. Mosport is probably the most intense track we go to all year. It’s super high-commitment, high-speed and very narrow, so when we go there with multiclass racing like we have here in IMSA, it makes for a very stressful event. But that’s what makes it exciting. We’ve been going to Mosport as a family for probably 20 or 25 years. I don’t actually remember the first time I went there, but I’ve seen pictures. As a driver, I’ve been going there since 2009. It’s always a fun place to go back to and I think no track suits our Cadillac better.”

After your trouble-free day at Watkins Glen netted a fourth-place finish last weekend, you’re headed to Canadian Tire Motorsport Park (aka “Mosport”), where you led the most laps and finished second last year. Your thoughts?

“Going to Mosport, I expect us to do very well. Last year, I led most of my stint and Jordan led until a few laps before the end. So we should be strong there. Let’s see. It should be good. Mosport is a fantastic, old-school track. It’s superfast and there’s one slow corner, which makes it actually quite difficult. It’s a difficult track, but it’s cool because of that.”

How would you describe the track, and how do you like the racing there?

“The Mosport event is a very cool event for us as a team. We have a lot of guests there for Konica Minolta and that makes it very interesting and exciting for us. A lot of those people were cheering us every lap in turn three, and at one point I started waving back. I really liked that. I feel like I’ve always done well at Mosport. I’ve not always finished because of technical issues. But I actually got my first podium in IMSA was at Mosport, so I have a good history there. Last year’s podium was nice, for sure. It would be nice to win a race there. I hope we can make that happen this weekend.”

Your thoughts as you head to Canada this weekend straight from a trouble-free day at Watkins Glen last Sunday?

“We always look forward to heading back to Mosport. We’ll have a lot going on with our sponsor Konica Minolta and that always makes us feel good. Because of that, and the fact we won there few years back and have had a few other podiums, including second place last year, we’re quite motivated to get back there. We had our work cut out for us at Watkins Glen and the team and drivers performed absolutely flawlessly for six hours. Unfortunately, all that could get us was a fourth-place finish. Mosport is a similar track in a lot of ways. We’ve never had the fastest car there, but our team and drivers and strategy earned us a win and the podiums. Two years ago, we felt like we had the race won before an unfortunate incident at the end. There’s still a good bit of the season left to go. We just need to stay out of trouble and hope the results will be enough to move us into championship contention.”