It wasn’t a win like the convincing one enjoyed a year ago this weekend by the No. 10 Konica Minolta Cadillac DPi-V.R team, but Saturday’s runner-up finish by Jordan Taylor, Renger van der Zande and Ryan Hunter-Reay in the 66th Mobil 1 Twelve Hours of Sebring certainly felt a lot like a win considering their ability to overcome adversity at what is arguably the world’s most grueling sportscar endurance marathon. 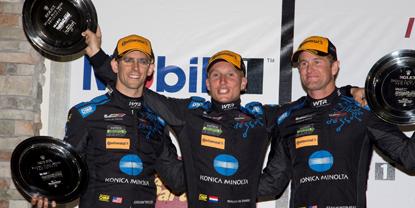 It wasn’t a win like the convincing one enjoyed a year ago this weekend by the No. 10 Konica Minolta Cadillac DPi-V.R team, but Saturday’s runner-up finish by Jordan Taylor, Renger van der Zande and Ryan Hunter-Reay in the 66th Mobil 1 Twelve Hours of Sebring certainly felt a lot like a win considering their ability to overcome adversity at what is arguably the world’s most grueling sportscar endurance marathon.

The weekend started with the team struggling to find the optimum setup to compete with the other powerhouse teams in the 43-car field. And, one race after van der Zande blazed to the pole position at the season-opening Rolex 24 At Daytona, the Dutch driving veteran and first-year driver with the team was able to qualify just 10th on the grid Friday afternoon.

Undaunted, the team went to work Saturday morning with the goal of improving the racecar as the 12-hour race unfolded and relying on creative strategy to work to within striking distance of its second consecutive Sebring victory by the final hours of the race.

With the exception of a pair of unexpected developments along the way, that’s precisely how it turned out for the defending series champions, who bounced back from a disappointing 15th-place finish at Daytona seven weeks ago to a solid second-place finish to a lightning-fast No. 22 Tequila Patron ESM Nissan DPi that turned out to be the car to beat all afternoon and into the night.

Van der Zande crossed the finish line 12.4 seconds behind Pipo Derani in the No. 22 machine he shared with Johannes van Overbeek and Nicolas Lapierre, and almost 30 seconds ahead of the third-place-finishing No. 31 Action Express Racing Cadillac DPi-V.R of Felipe Nasr, for the team’s third podium finish at Sebring in the last four years. And it came courtesy of some stellar recovery work by the No. 10 Konica Minolta Cadillac DPi-V.R pit crew.

After a flawless opening stint by van der Zande that saw the Dutch driver gradually work his way into the top-five in the opening two hours of the race, Taylor kept the forward march going by working his way into the top-three during his first two hours behind the wheel. That was until an attempt to top off the water in the radiator during a scheduled pit stop at the three-hour, 22-minute mark was thwarted by an equipment malfunction that required an unscheduled stop two laps later to complete the radiator fill. Taylor lost just four spots back to sixth place, but was able to work his way up to fourth by the time he handed the car over to IndyCar veteran Hunter-Reay at the four-hour mark.

“In my first stint, I was just following the others,” van der Zande said. “We lost a few positions – I think we lost a wheel nut when I first pitted, and when I returned, we were like eighth. I could catch up a little, I could fight a little, but couldn’t make any speed out of it. The windscreen was covered with dirt, I had trouble seeing. When I came in the second time, the car was much better and I could attack.”

“It was starting to go well,” said Taylor, who after his first fuel-and-tire stop endured a brief scare when a GT car side-slammed him as he was exiting pit lane, but the car sustained no evident damage. “We were just trying to stay out of trouble. After my first pit stop, I was coming out of the pits, I was way right and then an Audi drove into the side of me. It didn’t damage anything and I just kept going. We were running in the top-three. We knew we just needed to stay competitive for the next several hours and then go racing once it got dark.”

Hunter-Reay’s first two-hour stint was solid as the team’s third driver at this year’s endurance events took over in seventh place but worked his way into the top-five by the time he turned the car back over to van der Zande just short of the six-hour mark.

“I was in the car during the hottest part of the day,” he said after that first stint. “I was having issues getting the rear of the Cadillac in check. We were hopeful once it started cooling down that the car we had in practice would come back to us. Turns out, it did.”

Van der Zande had a more eventful time in the car during his next two-hour, 15-minute stint to start the second half of the race. He stayed in the top-five – in fact, leading for five laps when he got around van Overbeek in the eventual race-winning No. 22 Tequila Patron ESM Nissan DPi – until the right rear quarterpanel of his racecar was clipped off during contact from behind by Eric Curran in the No. 31 Action Express Racing Cadillac DPi-V.R at the seven-hour, 21-minute mark. That led to an unscheduled stop top replace the entire rear bodywork, which the Konica Minolta Cadillac crew did in relative short order but still dropped van der Zande from third to seventh place. Van der Zande worked his way up to sixth before pitting at the eight-hour, 11-minute mark to hand the car back to Hunter-Reay for a quick stint.

“It was very busy out there that stint,” Van Der Zande said. “The temperature was dropping and the car began handling quite well. I was able to drive to P1 and lead comfortably. Then, when I made a move on Eric Curran on the restart, he clipped my right rear. We lost a lot of time replacing the back end of the car. I was all the way past (Curran), so I’m not sure why that happened.”

Hunter-Reay’s subsequent 45-minute stint was eventful only because, with the sun setting low in the sky, he began having difficulty seeing past the grungy windscreen and had trouble hitting his marks in the braking zones. Still, he moved from sixth to fourth by the time he handed the car over to Taylor at the eight-hour, 50-minute mark and was done for the day, which ended with the runner-up finish.

“I think we experienced the full gamut today,” Hunter-Reay said. “We had ups and downs. My stint in the middle was certainly interesting. I had oil all over the windshield and dirt on top of that. The sun was setting into turn 17 and I could barely see 3 feet in front of the car. Jordan and Renger did a great job to finish the race from there. We got some good points for the team. We were close, but not the win I want here.”

Taylor, meanwhile, was able to stay inside the top-five for his final stint before handing the car over to van der Zande for the final one-hour, 45-minute run to the finish.

Van der Zande took over in fourth place, moved up to third thanks to quick pit work by the crew on the next-to-last stop of the race, then moved into second when the No. 55 Mazda DPi had problems during the last round of fuel-and-tire stops of the race with 42 minutes to go. Van der Zande stayed out of trouble during that final run to ensure the runner-up finish.

“It’s not a win, but to come away with a second the way we started is good,” Taylor said. “The team adapted well to everything that happened on track and in the pits. It was a great day for the team. They executed well and it was a great points day after our finish at Daytona. We are on the right footing now heading to Long Beach. We are learning more about the new tire and hope to continue to learn more at Long Beach. We made good changes throughout the weekend on the car. We struggled a little in the heat in the middle of the day today, and then the car came back to us at night when we really needed to race.”

“It is fantastic,” van der Zande added. “It was hard to find a real racecar. We were trying to race in the heat, and the race finishes in the night when it is cool, so you are in survival mode during the heat of the day. The car really comes alive at night. The engineers are superstars and they know what they are doing. They give me everything I need to perform. It was an eventful day. I got tapped on the rear and they made a quick fix. I have a lot of faith in my new team. They don’t give up and they stay calm when things happen. We were the best of the rest today.”

With the runner-up finish, the team moved from 15th to fourth in the standings, 14 points behind the No. 31 Action Express Cadillac DPi-V.R team.

“What can I say? What an amazing team,” team owner Wayne Taylor said. “What amazing partners – Konica Minolta, Cadillac. The drivers, Brian (Pillar, race engineer), Adam (Banet, assistant engineer) and their strategy. And all the guys on the team who worked so hard, they never gave up. We lost the back end of the car during the race. Still, we never gave up and it was nice to finish like we did and be able to say the Cadillac team is back. If you would’ve asked me halfway through the race, I wouldn’t have known what to think, but we just stuck to our plan and it worked. It’s not a win, but it’s almost as good as a win considering where we finished at Daytona, and considering all the issues we had here this weekend. Renger, Jordan, Ryan, they were incredible. Everybody did a great job. Nobody made any mistakes. It was really good.”

Round three of the 2018 IMSA WeatherTech SportsCar Championship is the Bubba Burger Sports Car Grand Prix on the streets of Long Beach, California on Saturday, April 14. The one-hour, 40-minute sprint race will be broadcast live on FOX beginning at 4 p.m. EDT. The No. 10 Konica Minolta Cadillac DPi-V.R team will be vying for its fourth consecutive victory in the event, run in conjunction with the IndyCar Series Grand Prix of Long Beach.