The The No. 93 Harrison Contracting Company Acura NSX GT3 Evo22 effort by Racers Edge Motorsports with WTR Andretti is piloted by the stellar driver lineup of Ashton Harrison, Danny Formal, Kyle Marcelli, and Ryan Briscoe. Harrison and Formal are rookies to the Rolex 24, while Marcelli is a veteran to the twice around the clock event and Briscoe proudly owns three Rolex watches. 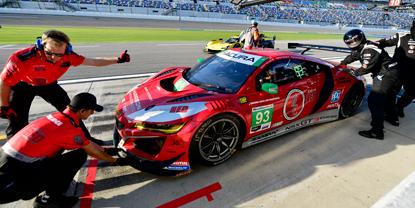 The No. 93 Harrison Contracting Company Acura NSX GT3 Evo22 heads into the 61st Rolex 24 at Daytona International Speedway this week for the team’s debut in the 2023 IMSA WeatherTech Series Michelin Endurance Cup. The RELY on Red Acura machine will line up for the green flag on the third row of the overall GTD grid for the twice-around-the-clock event.

Racers Edge Motorsports with WTRAndretti gathered solid data and information over six on-track sessions throughout the ROAR Before The 24, dialing in a set up to hone in on qualifying last Sunday afternoon. The preparation set up Marcelli to clock a 1:46.8 lap time to put the Acura NSX P4 in the GTD class field.

The The No. 93 Harrison Contracting Company Acura NSX GT3 Evo22 effort by Racers Edge Motorsports with WTR Andretti is piloted by the stellar driver lineup of Ashton Harrison, Danny Formal, Kyle Marcelli, and Ryan Briscoe. Harrison and Formal are rookies to the Rolex 24, while Marcelli is a veteran to the twice around the clock event and Briscoe proudly owns three Rolex watches.

The Rolex 24 At Daytona is somewhat of a racing family reunion, and the camaraderie is evident among the quartet. In addition to Briscoe’s experience in a WTR DPi, with whom he won his most recent Rolex 24 in 2020. Marcelli, Harrison, and Formal have been WTR teammates in the Lamborghini Super Trofeo North America paddock the past two years.

The No. 93 Harrison Contracting Acura NSX GT3 Evo22 begins official practice sessions this Thursday, January 26th, around Daytona International Speedway’s historic 3.56-mile, 12-turn road course circuit, including the famed night practice enjoyed by fans and teams alike. Both the Acura NSX and drivers will be part of the stars and cars at the IMSA Twenty-Four Premier at One Daytona on Wednesday, January 25.

The green flag for the legendary endurance race waves on Saturday, January 28th at 1:40 p.m. Live coverage is available on Peacock for the full 24-hour cycle, alternate coverage on USA Network, and the final hours and victory celebrations available on NBC starting at 12:00 p.m. ET on the 29th.

“We put our No 93 Harrison Contracting Acura NSX GT3 Evo22 P4 on the grid in GTD qualifying, which is a great place to be to start the 24 hours. I’m really pleased with that result as we’ve had a great car all weekend. All of us drivers- Ashton, Danny, Ryan and I are all getting along really well, we’re looking for the same performance out of the car, and the Racers Edge WTR Andretti team is getting along really well. We’ve got good prep behind us and now we have to focus forward to the race.

Today’s modern era of sportscar racing is an exciting time to be a part of IMSA and a part of sportscar racing as a whole; lots of new technology in the field, huge cars counts and capacity grids. It’s just a thriving time to be a part of the series. The race is no longer treated like an endurance race. The technology of the race cars has come so far, and they’re usually so reliable, and the teams are so strong, that it becomes a sprint race for 24 hours. So that’s going to make it both challenging and exciting for the teams and the fans.”

“I’m just super excited to be here with Racers Edge Motorsports with WTRAndretti in the No 93 Harrison Contracting Acura NSX GT3 Evo22. Kyle put the car in P4 in class and P6 in GTD overall, and he just did a fantastic job. The team has prepped the car so well. For me, the NSX has felt really, really good, I’ve felt so comfortable in it. The bus stop has been one of my strong points, and Turn 1. The car really fits my driving style; it’s a car you have to drive hard, and I like to drive hard. I think the team and myself are accommodating each other really well.”

“I’m thrilled for our P4 spot in qualifying. Kyle did a mega job in the No 93 Harrison Contracting Company Acura NSX GT3 Evo22 setting us up for starting in the front of the GTD field and mixing it up with some of the GTD Pro cars. I think we’re in a great spot headed into the Rolex 24- for my first Rolex 24- and I’m just excited to be sharing the car with my teammates. We’ve had so much great prep work from the Racers Edge crew, and amazing support from Harrison Contracting and WTR Andretti. I think this sets the mood- everyone has a positive attitude, we’re excited, we feel like we’ve accomplished a lot at the ROAR. But then again, it’s a new week next week, and we still have the same goals. We’re going to test and tune and get the car dialed in and be ready to take the green flag, and hopefully get Ryan his fourth Rolex and my first. I’m getting better and better in every session and I feel comfortable behind the wheel. I feel like the traffic is going to play a big role for everyone and taking advantage of that traffic is key. And then making sure we keep ourselves safe and out of trouble. The Acuras are performing well, and I’m really excited for the Acura Motorsports brand and looking forward to bringing them a victory in GTD.”

“Fantastic starting position for Racers Edge Motorsports with WTRAndretti. I know Kyle was really pushing hard out there and really wanted the pole, but I think we’re at a really great spot with the No 93 Harrison Contracting Acura NSX GT3 Evo22. We’re at the pointy end of the GTD field, hopefully ahead of a lot of the mess that could potentially be behind us. It’s always good to be up there at the start, especially with this many cars. But this is just the first step. The whole team has been working really well up to this point, and we’re just going to keep working hard. We have a long way to go here, still with a few more days of practice and then a 24-hour race. We can check qualifying off and be really proud of that result. Being in the Acura NSX has been really good for me. I’ve been learning the car and I’m really strong out there and comfortable, and actually quite at ease.  So now it’s just all about the fine tuning, working on driver changes, just trying to make sure everything I can control, I can do right, and so far, it’s been really smooth.”