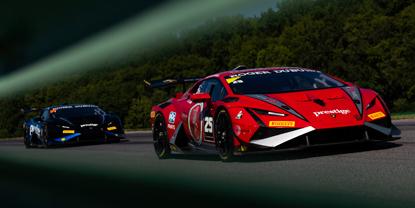 The Prestige Performance with Wayne Taylor Racing Lamborghini Super Trofeo (LST) stable enters the final domestic rounds of the 2022 LST season at VIRginia International Raceway and continues to lead the PRO and PRO|AM points championships. Kyle Marcelli and Daniel Formal lead by 26 points in the PRO class in their No. 1 Prestige Performance Huracan, while the No. 25 Harrison Contracting Company with WTR LST of Tom Long and Ashton Harrison leads the PRO|AM class by 2 points.

Daniel Formal and Kyle Marcelli came away from VIR with a single third-place podium in last year’s double header. The championship-leading duo have shown consistent form and pace in their blue and black No. 1 Prestige Performance with WTR LST throughout 2022 and are confident in their ability to improve in this year’s outing.

Ashton Harrison and Tom Long have one goal in mind for the upcoming ninth and tenth rounds of the season, and that is to win. The teammates continued their perfect streak of podiums at Road America, but they are both keen to take their red No. 25 Harrison Contracting Company machine to victory lane and extend their PRO|AM points lead.

Jordan Missig and Aidan Yoder resumed their upward trajectory at Road America, securing a season-best finish of fourth place in the PRO class for the No. 53 Prestige Performance with WTR LST. Missig had a pair of fourth place class finishes at VIR as a solo pilot last year, and together with teammate Yoder, they’ll be seeking a maiden PRO class podium this weekend.

Randy Sellari added to his collection of podiums in the AM class and grabbed a pair of top-five results for the No. 3 JG Wentworth with WTR LST last time out at Road America. The 2020 LB Cup champion will be eyeing more hardware and a chance to climb from his current position of fourth in the AM class points standings this weekend.

“Going into the final rounds in the United States of the 2022 Lamborghini Super Trofeo season, we’re leading the championship. It was definitely not the best nor the worst weekend at Road America. We got two pole positions and extended the championship lead. We gave up some points that were out of our control. A broken front right shock in Race 2 made it quite difficult to drive, but I’m super excited to improve at VIR. It’s one of my favorite tracks in the country, second only to Watkins Glen. We didn’t perform at our best there last year, but this year I’m thrilled and our setup that Prestige Performance with Wayne Taylor Racing and all the engineers have put together is just incredible. We roll out of the trailer super quick. I can’t wait for VIR and I’m grateful for the team, for Prestige Performance, Lamborghini Paramus, and everyone at Wayne Taylor Racing. We’re ready to attack.”

“I’m always looking forward to any race week. Last year at VIR, we struggled with our Lamborghini Super Trofeo program. Road America came after VIR last year, and that was the turning point in our season for the better. Thankfully, we’ve continued that momentum thus far in 2022. This year’s approach to VIR is different than last year’s. I’m looking forward to it for that reason. Our setups are a little bit different and our procedures are a little bit different and so far it’s been quite successful. That said, we cannot relax. This championship is still anybody’s and there are a couple of cars in the hunt. One small mistake and that lead can evaporate. As we saw at NOLA and Road America, unusual races without green to checkered running can get in the way. We’re hoping for normalcy and our goals remain simple—to execute as best as we can and avoid mistakes. Qualifying is important. We need to qualify up front and stay up front in the race. It’s possible to clinch the championship at VIR, but for now, we’ll take it one session at a time. We’ll see how the points shake out. Poles and wins—that’s the name of the game."

"Road America threw about every circumstance it could at us, but that didn’t stop Aidan and I from marching through the field. The weekend didn’t go our way initially, but we made up for it by passing about 15 cars in Race 1. Then, in Race 2, it started to rain just after the pitstop and I had to do what I could with the tires. We came home with a season-best result of fourth in class and fifth overall. So, going into the VIR, we feel that we can tackle almost everything. VIR is a beautiful race track that typically isn’t one of my favorites, but for some reason I seem to have a lot of success there. It’s a very rhythmic, flowing track and it’s a place that requires precision and accuracy to get right. Last year, we struggled a bit, but I have total confidence that the Prestige Performance with Wayne Taylor Racing crew has given us cars, like they have all year, that will be towards the front and in contention for podiums and race wins!"

“VIR is going to be a tricky and technical weekend for a multitude of reasons. The last time I was there was in 2020 in a Formula 4 car. To arrive at a track that’s as twisty and technical as VIR in a car that has four times the horsepower and three times the weight that I’m used to, is something that I’ll have to relearn and adapt to early on. With the added variable of rain in the forecast it’s going to be unpredictable. I’m excited to see how we progress through the week. That said, we’re coming off of our best weekend of the season at Road America where we scored our first overall top five and PRO class fourth place. Those are two achievements that I’m really proud to have accomplished in my first season with this team. I’m really proud of everyone in the Prestige Performance with Wayne Taylor Racing team, especially my teammate Jordan Missig, for keeping the car safe and working to build the setup faster and faster. We continued our learning process with a test the week following the last race, cut down our lap time by big chunks and got more comfortable on the limit of what our Lamborghini Huracán Super Trofeo EVO2 is capable of. Our confidence is soaring, the team’s momentum is high and I’m really looking forward to the final North American race of the season.”

"VIR is an epic circuit and one that all drivers get excited about. Tom and I still lead the championship in PRO|AM, and although we’re proud of our season-long podium streak, the goal is to stand on the top step this weekend and add to our win total. I had a class podium at VIR last year, and with the improvements we’ve made and the fast setup that Wayne Taylor Racing provides Tom and I with at every race, I’m confident that we have the pace and experience needed to succeed."

“I’m looking forward to VIR very much, as I consider VIR my ‘home track,’ having grown up driving and racing there through the years. The history around this circuit, being such an iconic ‘old school’ type design, makes it so unique for car setup and driving style. Ashton and I are pleased to have had a very consistent season so far to date, but we are gunning for more wins to cap the season as the championship fight grows closer. Wayne Taylor Racing and their engineering staff continue to provide us with stellar equipment to compete for podium results and we are ready for more success!"

Based in Indianapolis, Indiana, Wayne Taylor Racing is a leader in sportscar racing, recognized worldwide for fielding championship winning racing efforts since 2007. In addition to their DPi winning team, the team, under the Prestige Performance with Wayne Taylor Racing umbrella, has run a stable of championship winning cars and drivers in the Lamborghini Super Trofeo North America series for over half a decade, forming the basis of their Driver Development Program. Since its inception in 2015, the Prestige Performance with WTR team has clinched seven North American PRO Driver, Team and Dealer Championship titles, fielded the first woman World Finals race winner and became the overall 2017 Champions at the World Finals in Imola, Italy. Their Driver Development program has grown into interim classes like IMSA GTD, as it evolves to encompass a greater variety of skill and experience levels. For more information on Wayne Taylor Racing’s Driver Development Program and how to get involved, contact Travis Houge at info@waynetaylorracing.com.