In a highly eventful weekend at VIRginia International Raceway, the Prestige Performance with Wayne Taylor Racing Lamborghini Super Trofeo (LST) stable finished with an overall win, additional class podiums and an early clinch of the PRO Class Championship title (unofficial result). Next up for all four cars is the final rounds of the North America series as well as the much anticipated World Final in Portimão, Portugal. 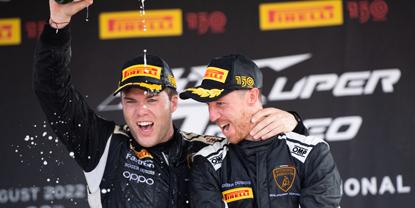 In a highly eventful weekend at VIRginia International Raceway, the Prestige Performance with Wayne Taylor Racing Lamborghini Super Trofeo (LST) stable finished with an overall win, additional class podiums and an early clinch of the PRO class Championship title (unofficial result). Next up for all four cars is the final rounds of the North America series as well as the much anticipated World Final in Portimão, Portugal.

In line with the fierce competition that this series has shown all season, Danny Formal, Kyle Marcelli and the No. 1 Prestige Performance team had to fight for top honors. In Race 1, their No. 1 machine was spun by a competitor in the first turn of the first race lap. Nonetheless, Formal set the fastest lap of the race, recovering to the top eight before handing off the cockpit. Marcelli proceeded to lap a full second faster than the leaders towards the end of his stint, and pushed the team back towards an overall podium. In Race 2, the duo completed a podium sweep in the best way possible, winning from third on the grid and mathematically securing the PRO class title. The win brings their total to five on the season and completes a stellar campaign with their first championship crown as teammates.

In their best weekend yet, Jordan Missig and Aidan Yoder put in a strong performance throughout the event. In Race 1, the No. 53 Prestige Performance with Wayne Taylor Racing LST finished sixth in class and in the overall top 10. The second race saw them tie their season best overall position of fifth and their best class position of fourth, just narrowly missing their first podium of the year, but giving them great momentum heading into the World Final.

A podium was never in doubt for Randy Sellari who led the AM class in Race 1, despite a late-race battle. In Race 2, the 2020 LB Cup champion finished a strong fourth. The No. 3 JG Wentworth with WTR LST driver has now podiumed in three consecutive race weekends.

Coming into VIR with high hopes of extending their PRO|AM Championship lead, a series of misfortune in both races quickly reversed Ashton Harrison, Tom Long and the red No. 25 Harrison Contacting Company LST team’s momentum. In Race 1 a mechanical failure ended their perfect streak of podiums while their luck worsened in Race 2 when they were taken out by an out-of-class competitor. Harrison and Long are taking the result on the chin and focusing on attacking to the maximum at the series finale in Portugal.

"Today’s race was fantastic. All season, Danny and I have felt calm and confident in our car. We’ve been fast all year with six pole positions and that’s now win number five for us. We’ve given up wins in places like NOLA with strange circumstances and odd races, but these green flag races are what favor us the most. Danny and I are very close on pace so we need races to stay green and that’s what we had today. I had a great start and I was smart, minimizing risk given the championship picture. We had the 88 and 50 cars quite a few spots behind us. I tried to go forward, but was quite content to hold third. I made a couple of passing attempts, but I knew we had an advantage in pit lane. It seemed like the 27 struggled and Danny was a rocket and got by him for the win and drove away. Our long run pace was quite good. Danny probably likes this place more than I do. It’s a high risk, high reward circuit and it’s fantastic to get the win. I think that clinches the points. It’s a privilege to represent Wayne Taylor Racing and Prestige Performance.”

"The North American portion of the season is over. Four more races, total, to go. Some circumstances haven’t gone our way this year—I think we could’ve had even more wins, but I cannot be upset with five wins. That’s a 50% win rate so far. I’m extremely grateful to be a part of this team. I’m grateful for Kyle, for Prestige Performance, for Lamborghini Paramus and everyone in the team—Jeff, Dave, all the engineers, Sri—everyone. We’ll go to the World Finals and see if we can bring a World Championship back to America. For Costa Rica, it would be the first in history. I’m going to get physically ready, lose a few kilos, and I couldn’t be more excited.”

"It was a tough weekend for us at first, but we knew what we needed to do to get the cars dialed in. In qualifying, we had a decent effort. In Race 1 we had to take avoiding action and found ourselves at the back. Aidan and I did our thing and got back through the pack. I was able to weave inside and outside of the cars in the back. Danny and I were working together for a bit and we were able to get a sixth place finish in class and a top 10 overall. In Race 2, Aidan had a great start, getting the jump on the No. 50. He picked up two spots and maintained the gap there and kept it clean. He got two more spots before the pit cycle and we were in the fight. From there, I hit my marks and brought it home in fifth overall!"

"Coming into the weekend I knew it would be important to leave on a high note since there is such a long period of downtime before Portugal. Leaving here with a good result would carry all the way overseas, and that was exactly what we were able to do. We tied our season best overall and the car kept improving every session. I’m doing my best to learn as much as I can from everyone around me since we had so many red flags in practice and limited running time. We had a lot to learn in a very short period. Thanks to all the engineers and Kyle and Danny for helping me out with that. In Race 2, we were ready to go and flying. It was about avoiding all the melee, as always. A big thank you goes out to Jordan for giving me a clean car in Race 1 and closing it out in Race 2. I’m feeling really good for Portimão because this was a great result for us."

“Really unfortunate here at VIR with two DNFs. We came in leading the championship by 2 points and it seemed early on that we had a really fast car. At times, we were the one to beat. We had what was a good race going yesterday until a hub failed. Today, Tom had an amazing start putting us into first position and fifth overall. An out-of-class car was a little too aggressive into Turn 1, and that took us out of the race. Contact from a second car, by no fault of their’s, took the back of our car off. Going into Portugal, this gives us a whole new mindset. It’s going to be maximum attack.”

"What an up-and-down weekend. Wayne Taylor Racing did a phenomenal job with our car, setting the pace right up front. We were running up front both days and both races produced bad luck. I’m super disappointed that things turned this way so late in the championship. I was hoping that my home track would bring better luck. It was an incredible job for the whole team and I feel bad that there’s so much work to do before Portugal. We have fast race cars, we just have to finish."

Based in Indianapolis, Indiana, Wayne Taylor Racing is a leader in sportscar racing, recognized worldwide for fielding championship winning racing efforts since 2007. In addition to their DPi winning team, the team, under the Prestige Performance with Wayne Taylor Racing umbrella, has run a stable of championship winning cars and drivers in the Lamborghini Super Trofeo North America series for over half a decade, forming the basis of their Driver Development Program. Since its inception in 2015, the Prestige Performance with WTR team has clinched seven North American PRO Driver, Team and Dealer Championship titles, fielded the first woman World Finals race winner and became the overall 2017 Champions at the World Finals in Imola, Italy. Their Driver Development program has grown into interim classes like IMSA GTD, as it evolves to encompass a greater variety of skill and experience levels. For more information on Wayne Taylor Racing’s Driver Development Program and how to get involved, contact Travis Houge at info@waynetaylorracing.com.