The No. 10 Konica Minolta team has achieved plenty of success at the 2.459-mile, 10-turn permanent road course with one win, two pole positions, and four podium finishes in their six years of competing at this historic circuit. With CTMP is making its return to the IMSA calendar after a pandemic-imposed hiatus, the team plans on picking up where they left off, once again being cheered on at Turn 3 by employees and families of the Konica Minolta Canadian branches. 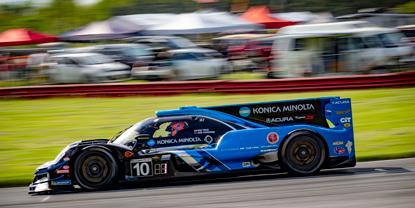 After an incredibly close win at the Sahlen’s Six Hours of the Glen, the current 2022 IMSA WeatherTech SportsCar Championship leaders will compete at Canadian Tire Motorsports Park for one of the final sprint races of the season. Ricky Taylor and Filipe Albuquerque will pilot the No. 10 Konica Minolta Acura ARX-05 in hopes of taking the team to victory lane for the fourth time this season coming off of a thrilling win at Watkins Glen.

The No. 10 Konica Minolta team has achieved plenty of success at the 2.459-mile, 10-turn permanent road course with one win, two pole positions, and four podium finishes in their six years of competing at this historic circuit. With CTMP is making its return to the IMSA calendar after a pandemic-imposed hiatus, the team plans on picking up where they left off, once again being cheered on at Turn 3 by employees and families of the Konica Minolta Canadian branches.

“It’s great to be back in the championship lead. Filipe gave us some great momentum going to Mosport,” said Ricky Taylor. “Mosport is a very challenging race. And going there after a few years off will be very exciting. It’ll be WTRs first time there with an Acura, so we need to do our best to prepare a good car to kick the weekend off on the right foot.”

This will be Filipe Albuquerque’s third time competing at the track, but first time in an Acura. Albuquerque has one top-five finish and is looking to continue the momentum after a stellar weekend at Watkins Glen International.

“We are coming from an amazing weekend with a great feeling from the team,” enthused Filipe Albuquerque. “There is not much time to rest. The boys have to prepare the car because it was a bit wrecked from the last race. I’ve never been to Mosport with this car, but I’m sure Ricky will bring me up to speed. We are always helping each other, so I’m not worried about that. We want to win. That’s our way of racing. We need to win but also finish ahead of the 60 because the points on the championship. We’ll see how it goes, but we are super happy and motivated.”

“This is the first race that I’ll be missing in many years,” said Wayne Taylor. “I’m going to South Africa to visit my family that I haven’t seen for three years. This is the only time that I can go given that we have the new LMDh car coming and we’ve got racing and testing still to do. This is the only time that I can make it which is sad because this is such a big Konica Minolta race. I think it’s going to be a really good track for us. I’m excited and I don’t know what it’ll be like being in another country while my team and son are racing. I don’t know how I’m going to handle that! I’ll certainly be texting the team the entire weekend. It’s nice going into a race weekend like this being ahead of the championship. The one thing that helps is that you have the last pit stop, so you’ll be the first car out of the pits and can make up decent track position. Track position is everything and now we can try and use that for ourselves this weekend. I’m excited, I’m just a little sad that I won’t be there. But I have a good team of people, Travis runs a good show, the whole team can operate without me.”