The No. 10 Konica Minolta Acura ARX-05 battled its way to a sixth-place finish in the IMSA WeatherTech SportsCar Championship Grand Prix at Canadian Tire Motorsport Park. Teammates Ricky Taylor and Filipe Albuquerque leave Canada trailing the championship-leading No. 60 Acura by 56 points with two races remaining on the 2022 calendar. 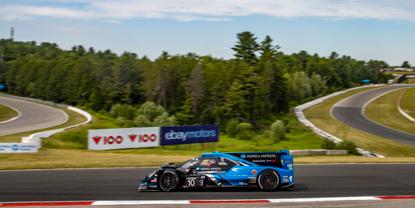 Taylor took the green flag for the blue and black Konica Minolta team, holding position in second, before his right rear tire delaminated mid-way through his stint. He pitted for emergency service before pitting again under yellow to avoid penalty. Despite the early setbacks, a good result was still possible, if not probable.

Albuquerque took his turn behind the wheel and was back on the heels of the DPi pack within three laps. After fighting with Cadillacs ahead for many laps, Filipe handed the driving duties back to Ricky for the run to the finish, exiting the pits in third place with an hour and a half remaining.

The team made one final scheduled stop for a splash of fuel and were running second on track, closing down the leader, when a chasing Cadillac dove up the inside into Turn 5a, spinning Taylor into the barrier. He carried on but spun into the wall again due to contact while trying to make a move for fifth position into Turn 9, five minutes later. The team came into the pits once more, changed the front wing, and Ricky drove a damaged Acura machine to the checkered in sixth, concluding a difficult day on track.

“Today was a rough day, to be honest,” said Ricky Taylor. “From the get-go it was challenging. The puncture was bad luck, but from there, we had an additional couple of issues. The incident with the No. 02 came when we had great track position after a restart and sent us to the back of the field. From there, I was in the mindset of trying to get as many points as possible and didn’t have much to lose. I have to apologize to the No. 31. They didn’t lose because of it, but I didn’t make a very good move on them trying to get by in Turn 9. I was trying to get every position that I could because I could see the championship points going away. Unfortunately, it caused a yellow and put the No. 60 in a tough position as well. It was a bad day, but we’ve still got two races to go. As quickly as we’ve lost the points lead in this one round, it can always swing back. We’ve shown how we can recover from Long Beach to Laguna and from Detroit to Watkins. We’ll have to do the same from CTMP to Road America.”

“What an awful day in the office today,” said Filipe Albuquerque. “Everything happened to us. We had a puncture from debris that put us in last. It would’ve been a long stint for me to go to the finish—two hours and 20 minutes. On this track, that was too much, so I decided to hand it back to Ricky, and he was really on it. It was the right call there. The team did a great job on strategy to put us back in contention. We were in second position in the last stint and solid there. Unfortunately, an optimistic Earl Bamber spun us—not acceptable driving there. They are not fighting for the championship and we are. It’s okay for them to be aggressive, but that was not nice. Ricky was driving to catch the back of the field and had contact with the No. 31—a racing incident—which put us into the wall. It was painful to come back and the entire race, things kept happening to us. When it’s not meant to be, it’s not meant to be. We’ll come back stronger for the next one.”

The 2022 IMSA WeatherTech SportsCar Championship season continues next month with the IMSA SportsCar Weekend at Road America, the final sprint race of the year, August 4th-7th. Practice 1 begins on Friday, August 5th at 12:05 p.m. ET. Green flag for the two-hour and 40-minute sprint race will wave at 2:40 p.m. ET on Sunday, August 7th. Full coverage is available on Peacock beginning at 2:40 p.m. ET.