Wayne Taylor Racing has two previous wins and ten podiums at the Upstate New York circuit. On both winning occasions, Taylor was at the wheel. Last year, the team secured back-to-back poles in two races held at WGI due to Covid restrictions. In both the Six Hours and the sprint race, Taylor and Albuquerque converted pole into a podium with strong race day performances. 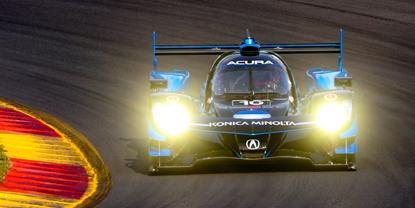 As the reigning Michelin Endurance Cup Champions, Ricky Taylor, Filipe Albuquerque and the No. 10 Konica Minolta Acura ARX-05 team are ready to compete for a top result at the Sahlen’s Six Hours of the Glen.

Hosting the third endurance race on the IMSA WeatherTech SportsCar Championship calendar, Watkins Glen International’s 3.4-mile, 11-turn purpose-built road course is a fan-favorite and one of the most historic racing venues in the United States.

Wayne Taylor Racing has two previous wins and ten podiums at the Upstate New York circuit. On both winning occasions, Taylor was at the wheel. Last year, the team secured back-to-back poles in two races held at WGI due to Covid restrictions. In both the Six Hours and the sprint race, Taylor and Albuquerque converted pole into a podium with strong race day performances.

“After a tough weekend in Detroit, we are excited to get back to traditional road courses,” said Ricky Taylor, two-time IMSA WeatherTech SportsCar Champion. “Watkins Glen has always been a strong racetrack for us and for Acura. We need to get our mojo back that helped us win in Laguna Seca and Mid-Ohio. The 6-hour is such an iconic event and as we enter the second half of the year, we need to take control of the points.”

A Watkins Glen winner in 2016 and 2017 and a two-time podium finisher with the blue and black Konica Minolta crew in 2021, Albuquerque is eager to return to the top step.

“Watkins Glen is normally a great track for our car,” said Filipe Albuquerque. “We’ll have to see how the balance of performance affects us. This championship has been very competitive. It’s about who makes the fewest mistakes and we are coming off a race weekend (in Detroit) that wasn’t great for us. A few mistakes cost us a lot. So, we enter this weekend with the feeling of needing to do a perfect job at Watkins Glen to get the third win of the year. After a first corner incident for my car at Le Mans, I’m even more focused on getting a good result. Let’s go for the win!”

With a podium this year, Wayne Taylor’s team will have podiumed in half of its previous 22 entries at Watkins Glen. He and the team are focused on achieving that result again.

“The title is still very open,” said team owner Wayne Taylor. “The Cadillacs still have the edge in terms of power and BoP. However, that’s out of our hands. We’re very much looking forward to going to Watkins Glen. It’s a race we haven’t won in a while. We had a successful test there recently. Everyone is excited. We love this track. The points race will continue. There’s so little gained or lost because there’s only six cars in the field—it’s pretty tough. We’re only ten points out of the lead, and the leading car is an Acura, which is good. I’m looking forward to going back to Watkins Glen.”

Practice for the Sahlen’s Six Hours of the Glen begins this Friday, June 24th at 4:30 p.m. ET. Qualifying is set for Saturday at 1:20 p.m. ET. Green flag for the main event will wave at 10:40 a.m. ET on Sunday, June 25th with full coverage streaming on Peacock and television coverage on the USA Network beginning at 2:00 p.m. ET.