No. 10 Konica Minolta Acura ARX-05's Ricky Taylor and Filipe Albuquerque won last year’s edition in a dramatic photo-finish, and Acura has won the last four races at Mid-Ohio. Taylor has been behind the wheel for three of those victories. 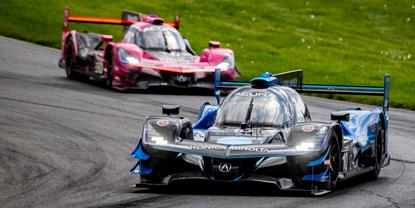 After a thrilling first win of the season at the last round in Monterey, California, the No. 10 Konica Minolta Acura ARX-05 heads to Mid-Ohio Sports Car Course for a sprint race at another purpose-built road course that historically suits Acura’s chassis. Co-drivers Ricky Taylor and Filipe Albuquerque won last year’s edition in a dramatic photo-finish, and Acura has won the last four races at Mid-Ohio. Taylor has been behind the wheel for three of those victories.

With Honda Performance Development’s Ohio base of operations nearby, the team will be looking to score a second victory in a row in 2022 and their second consecutive victory at the Lexington circuit.

Taylor is especially keen to return to the 13-turn, 2.258-mile track where he has had so much success in recent years.

“This stretch of the season is very important to us,” said Ricky Taylor. “Mid-Ohio, similarly, to Laguna Seca, suits the Acura ARX-05 very well. At these kinds of race tracks we must come away with maximum points and take every opportunity we can to take and extend a points lead in the championship. The race at Mid-Ohio is always unpredictable, it is treacherous with traffic and normally wide open with strategy games being played. We must try to do just what we did in Laguna and attempt to control the race the best that we can.”

Having executed a stellar double-stint to begin last year’s winning effort, Albuquerque is excited to be back.

“The momentum is good as we’re still celebrating from Laguna with Mid-Ohio being so close,” said Filipe Albuquerque. “We’re in a great spot in the championship. Mid-Ohio was a great one for us last year, so it would be ideal for us to continue that streak. The motivation is high in the team, and we have a chance to go for the win. Ricky, the No. 10 Konica Minolta Acura ARX-05 team and I will do our best to go for another win. But we know that the competition is hard. So, we will see if we can minimize our mistakes and make the perfect lap in qualifying because you can control the race better from P1 there. So, we’ll see!”

Wayne Taylor, who captured his first win at Mid-Ohio as a team owner in 2021, is equally eager to capture a second victory.

“Looking forward to going to Mid-Ohio,” mentioned team owner, Wayne Taylor. “We won there last year and now we’re tied with the lead for the championship with the other Acura coming out of a win at Laguna. I’m disappointed that the Cadillacs have been given their weight distribution back after I thought they were not going to make changes after every race, so we will now have to work around that. There’s still a long way to go in the championship. It will be tough for us moving forward because Detroit will be a problem in terms of BoP, so Mid-Ohio will set the stage for how bad or how good the rest of the season will be. I’m excited to get back to Mid-Ohio!”

Practice for the Mid-Ohio Grand Prix begins this Friday, May 13th at 4:00 p.m. ET. Qualifying is set for Saturday at 1:15 p.m. ET. Green flag for the main event will wave at 2:10 p.m. ET on Sunday, May 15th with full coverage streaming on Peacock and television coverage on the USA Network beginning at 2:00 p.m. ET.