The Prestige Performance with Wayne Taylor Racing (WTR) Lamborghini Super Trofeo (LST) stable of seven drivers piloting four cars across three classes is ready for an intercontinental battle at the Autódromo Internacional do Algarve near Portimão, Portugal this week. 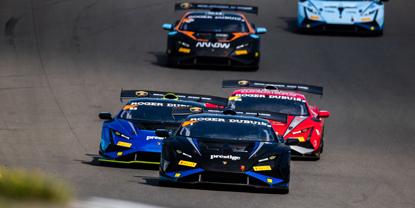 The Prestige Performance with Wayne Taylor Racing (WTR) Lamborghini Super Trofeo (LST) stable of seven drivers piloting four cars across three classes is ready for an intercontinental battle at the Autódromo Internacional do Algarve near Portimão, Portugal this week. The Prestige Lamborghinis will contest the final North American races of the season, before competing in two World Final races against their European counterparts over the weekend, crowning a World Champion.

With the North America rounds complete on Friday, the entire stable will then set their sights on becoming World Champions in their respective classes. If Kyle Marcelli and Danny Formal can bring home the overall crown, they will become the first World Final winners for Wayne Taylor Racing since 2017 and Formal will become the first ever LST World Champion from Costa Rica.

Ashton Harrison and Tom Long currently occupy third in the North American PRO|AM standings in the No. 25 Harrison Contracting Company with Wayne Taylor Racing LST, with an opportunity to secure second place in the championship. Harrison is coming off of a fantastic run of success in the SRO GT World Challenge Championship, having become the first woman to win a title in any series and any class under the SRO umbrella by securing the Driver and Team titles earlier this month. As the first female winner of a World Final race in 2020, and with a pair of fourth-place finishes after intense battles with European competitors last year, Harrison aims to finish 2022 strong. It will be Long’s first time racing at Portimao, and the lineup’s pro is equally enthusiastic.

Randy Sellari can achieve a top-three finish in the North American AM class points. The 2020 LB Cup Champion is keen to add a win to his total of four podiums on the year. With a best finish of fifth overall in last year’s World Finals, he’ll look to climb a couple of spots higher and secure a trophy on the international stage over the weekend.

“It’s been a fantastic season thus far in the No. 1 Prestige Performance with Wayne Taylor Racing Lamborghini. We look to put an exclamation point on our North American championship with a win in the World Final. That’s without question the goal and objective. We’ve got four races total in Portimão. For us, we’re going to utilize the North America races as extra preparation. We aren’t going to push too hard or take any chances. We need to save the equipment for the World Final, but of course, the Team Championship is still to be decided so we’ll be looking for a strong result, just without taking any extra risks that would jeopardize us in the world rounds. As for the track, it’s a new venue for me. It’s been a little while since I’ve had to learn a new circuit—since the final last year in Misano. I enjoy the challenge and thankfully we have lots of test time in days leading up. It’s important that we get a track walk in early. I’ve already studied a bunch of video and data and I’m looking forward to it. The track looks incredible from the onboards. Obviously, it’s a Formula 1 circuit and it’s going to be smooth, high-grip, and make for some great racing. The last thing I want to say is a big thank you to my teammate Danny Formal. He’s been wonderful to work with all season. He’s been super fast, aggressive when needed and has just done a great job. It’s a pleasure to share the seat with him, and I also want to thank our engineers Jeff, David, Sri and the whole team. The mechanics have ensured that our car has performed flawlessly. It’s been quick and reliable and that is a result of the team’s hard work and preparation. You’d expect nothing less from a team like Wayne Taylor Racing and I’m very appreciative to have the opportunity to drive for such an iconic team. Thank you for the support we get from Prestige Performance, Konica Minolta, Harrison Contracting and JG Wentworth because it all leads to our results and performance."

“I’m thrilled to be going to Portugal for the last two rounds of the Lamborghini Super Trofeo North America series. We’re already Driver Champions so the pressure is off there, but Kyle and I want to tie the record of seven wins in a season. We have five already. We’ll try, but our main goal is the North America Team Championship and the World Final title after the NA races conclude. I’m super confident because the car has been phenomenal all year long. The engineers at Prestige Performance with Wayne Taylor Racing have given us a rocket ship. I’m happy to be going back to Portugal, as I’ve been there for the karting world finals in 2012 and I’m familiar with the town of Portimão. I’m super excited and motivated—ready to bring the World Championship back to Wayne Taylor Racing and be the first Costa Rican champion and win the international competition for North America to show that we’re the top Super Trofeo series in the world!”

"With the title fight still up for grabs in the Team Championship, it’s all hands on deck to secure both the Driver and Team titles for Prestige Performance with Wayne Taylor in 2022. Once the North America races conclude, our focus turns towards the World Final to try and show the European field what the American Super Trofeo Series is all about! I am excited to get to learn a new track, especially one as prestigious as Portimão. This track has hosted multiple F1 and WEC races before so I'm excited just to add the Lamborghini Super Trofeo World Final to that list. Lastly, I want to take the time to thank everyone at WTR for their efforts all year long leading up to the last races of the season. When we win the Team Championship it won’t be because of the drivers, it will be because of how hard-working and dedicated this whole team is."

“Lamborghini Super Trofeo World Final. Where to begin? This has been a race weekend circled on my calendar since the beginning of the year. When you join this series, you have this event in the back of your mind that you are continuously preparing for. Ultimately, you want to shine on the world stage. In line with our theme of making this a learning year with Prestige Performance with Wayne Taylor Racing, this weekend presents one of the best opportunities. The World Final is a whole week of driving, not just a weekend. Track activities are planned Monday through Sunday so we’ll have more condensed running than I’ve ever had in my career. There will a lot of time to work on my skills, dial it in, and hone in on the nitty gritty that will help us go fast around the Autódromo do Algarve. My main goal for the weekend is to bring home the Team Championship for Wayne Taylor Racing. All the guys and girls have worked so hard all year and it would be a rewarding accomplishment. We’ll continue the learning process as always and I’ll make the most of my first race overseas.”

"The World Final is always my favorite part of being a participant in the LST programs. All of the drivers coming together and getting to compete at a circuit most of us haven’t been at before is always very exciting. I’m looking forward to fighting for the maximum result in PRO|AM for Tom and I. At this point, we have nothing to lose and everything to gain so we will be in full attack mode. The Team Championship is top priority for all the drivers and crew at Prestige Performance with Wayne Taylor Racing. We’re ready to race!"

“I have not raced Portimao before, but very much looking forward to it! The track looks quite demanding with tons of elevation change and blind corners. The flow looks very fun and I hope we can get both the drivers and car setups dialed in quickly. I’ve been studying quite a bit over the weeks leading up to the event to prepare. It’ll be quite interesting as I’ve never been to a LST World Finals event before, and can anticipate the competition will be incredible.

For Ashton and I, our goal is simply maximize our results. The final US round did not go our way, and we are aiming to end the season on a high note."