he Prestige Performance with Wayne Taylor Racing (WTR) Lamborghini Super Trofeo (LST) stable concluded their season and 2022 Lamborghini Super Trofeo Grand Finals in Portugal. The teams were divided into a PRO and PRO|AM class split, and an LB Cup and AM class split for the weekend-long double header which was highlighted by an overall second-place podium in PRO and PRO|AM Race 2 by the No. 101 Prestige Performance with Wayne Taylor Racing PRO car. 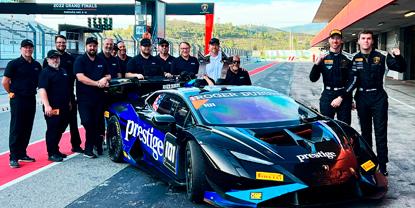 The Prestige Performance with Wayne Taylor Racing (WTR) Lamborghini Super Trofeo (LST) stable concluded their season and 2022 Lamborghini Super Trofeo Grand Finals in Portugal. The teams were divided into a PRO and PRO|AM class split, and an LB Cup and AM class split for the weekend-long double header which was highlighted by an overall second-place podium in PRO and PRO|AM Race 2 by the No. 101 Prestige Performance with Wayne Taylor Racing PRO car.

After a challenging outing in which they climbed from last to sixth in Race 1, Kyle Marcelli and Daniel Formal received their North America Drivers’ Championship trophies at a prize giving in Portimão on Saturday night. The pair were on-form on Sunday, pacing the field and chasing down the leader to within 1 second in the closing laps. The American champions ultimately finished in fourth place in the world standings.

Longtime WTR LST standout Ashton Harrison celebrated her final weekend in the Lamborghini spec series with a best finish of fourth in PRO|AM beside teammate and coach Tom Long in the No. 125 Harrison Contracting Company with WTR and would finish fifth in the world within their class.

Randy Sellari made up over a dozen positions from his qualifying spots across both races, showing fantastic long-run pace in the No. 103 JG Wentworth with WTR.

“Another season concludes. We came into this weekend with a lot of hope and confidence and excitement. It was fun to learn a new racetrack. This is an amazing facility here in Portugal at the Algarve International Circuit. It’s a high-speed racetrack with lots of elevation change and high G-force loads and a unique track surface that changes dramatically based on track temperature and ambient temperature. Prestige Performance with Wayne Taylor Racing worked their butts off to give us a good car all weekend. We were scratching our heads a few times trying to find that sweet spot. We were happy one session and disappointed the next. For me, this weekend was a rollercoaster of emotion. We’re somewhat pleased. We’re here to win and we took a third and a second in the North American rounds and went from last to sixth in the first world race. It was a heck of a drive and a battle the entire time. Today, we qualified third and finished second on the tailpipes of the lead car. As the sun set, the car seemed to come alive. A huge thank-you goes out to Prestige Performance for this opportunity. We wouldn’t be in the car if it wasn’t for their support. Danny and I have really enjoyed working with each other. We push each other and are trading tenths every time we’re in the car. We’ve got a great team around us and there isn’t a single weak link in this program and at the end of the day, we’re pleased to bring the North America championship back to Wayne Taylor Racing. We didn’t get the World Championship, but you can bet we’ll be back to get that next year."

“Not the weekend we hoped for after such a dominant season, but super grateful and thankful for Prestige Performance with Wayne Taylor Racing and Lamborghini Paramus for the opportunity to represent them on the world stage. Race 2 today was better than Race 1 for sure. We showed that we had very good pace—good enough to catch the leader from almost 4 seconds back. Dirty air prevented me for fighting for the win. I kept washing outside track limits so I couldn’t go for the pass without risking a penalty. That said, I’m super happy with the performance today, but disappointed that we couldn’t fight for the World Championship win because of misfortune that was out of our hands in Race 1. I’m super proud of Wayne Taylor Racing—North America Champions with five wins this season. We were on the podium 11 races out of 12 and it was a fantastic season. I hope to be back in 2023, defend our title, and go back-to-back in the championship. Thank you, and I’m grateful to be a part of this program.”

"Another year is in the books and another Lamborghini Super Trofeo Grand Finals is done and dusted. What can I say? Aidan and I gave it all that we had over the course of the two races this weekend. We delt with a lot of bad luck, but we had to play with the hand we were delt and make the most of our opportunities in the races and we did that. We put our heads down and secured two top-10 finishes with very strong stints from Aidan and myself. We went from the back to the front and passed numerous competitors. More importantly, I can’t say enough for what the Wayne Taylor Racing crew has been able to do for us. They put the car back together multiple times on top of their efforts getting four cars ready to go out on track for so many sessions. We had one of the fastest cars in the paddock and it was a pleasure to drive. Thank you so much to all the Wayne Taylor Racing crew back at the shop to get these cars ready and shipped overseas. It was a heck of a season. Congratulations to the No. 1 car on their championship and congratulations to my teammate Aidan on a successful season all-around. Looking forward to 2023!"

“What an incredible way to end an incredible season. Two top-10s in the Lamborghini Super Trofeo Grand Finals exceeded all my expectations going into this year. My theme has been to learn and develop as a driver and a team member as much as I can. This season was a big jump for me personally not only in terms of learning the car, but in terms of how to function in a team of this size. To see how this organization maneuvers through difficulties as well as how they keep their heads down is something I’ve cherished. I’m really thankful for the opportunity to join Wayne Taylor Racing this season and a very big thank you goes out to Jordan Missig. It takes a team effort, and everyone had to commit to this season. It takes a village and I’m super proud to be ending this way and give all the guys and girls something to celebrate heading into the offseason. This was an up-and-down year with a lot of learning. Lots to be proud of, especially with us being the first Americans, Jordan and I both, to cross the line yesterday. This couldn’t have happened without the team’s effort all week. I can’t thank everybody enough and can’t wait for next year!”

"This was a heck of a way to end my Super Trofeo career. I’m so proud to have been a part of Harrison Contracting Company with Wayne Taylor Racing for these four seasons. It’s been amazing and I’m super thankful for all the opportunities they’ve provided. I’m looking forward to what the future holds. I’ll always be thankful to Lamborghini for getting me to this point in my career in GT racing and I can’t wait to see everyone again soon!”

“The Grand Finals didn’t go our way this time, unfortunately. Our Harrison Contracting Company Lamborghini certainly had the pace to contend for the win thanks to the Wayne Taylor Racing team. The Grand Finals week in Portugal was one I will never forget, with plenty of special moments at a world class venue and gorgeous setting. I’m looking forward to what the future holds!”