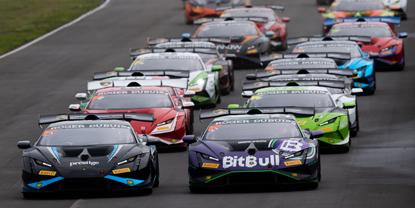 The No. 1 Prestige Performance with Wayne Taylor Racing duo of Kyle Marcelli and Daniel Formal lead the PRO Driver Championship. After securing another win at the last round in New Orleans, they are determined to extend their advantage at the historic Upstate New York circuit.

Jordan Missig and Aidan Yoder, who fought hard in their No. 53 Prestige Performance with Wayne Taylor Racing LST at NOLA and showed that they have the pace to compete at the front of the PRO class, will look to continue their positive trajectory in their third weekend as teammates.

After increasing their lead atop the PRO|AM class standings last time out, Tom Long and Ashton Harrison, drivers of the No. 25 Harrison Contracting Company with Wayne Taylor Racing LST, will look to press their advantage further at the Glen.

Randy Sellari, driver of the No. 3 JG Wentworth with Wayne Taylor Racing LST, finished one spot shy of a podium in Race 2 at NOLA Motorsports Park. His eyes are set on achieving his second podium of the year at one of his favorite tracks.

“We’re excited and optimistic. It’s been a strong season so far in the No. 1 Prestige Performance with Wayne Taylor Racing Lamborghini. We’ve had wins and pole positions, but each weekend has not been perfect—it’s not been easy. There was adversity in Race 2 at Laguna Seca after getting turned around in the first corner. We finished second, but felt we left a win on the table there. In New Orleans we got caught out a bit with the weather and our tire choice and had a fifth place in Race 1. Again, we felt we left something on the table, but the wins and the pole positions at both races give us great confidence heading into Watkins Glen. We have unfinished business there, as a problem resulted in a DNF. It was no one’s fault—a tire issue that ended our weekend. We’re looking to rebound and the goals are simple. We want to qualify up front, stay out of trouble, and put that No. 1 Prestige Performance with WTR car in victory lane. Danny’s been checking all the boxes this year and so have our team and mechanics. The car has been reliable and flawless and from an engineering standpoint, the car has been rolling off the trailer in a good spot. We have to keep that momentum going and stay focused on the championship.

“Heading into rounds five and six of the championship, we’re leading, which is fantastic. I’m super excited to get back to Watkins Glen. It’s kind of a redemption track for Kyle and myself. It’s my favorite track in the country and it’s extremely quick. The new Lamborghini Huracán Super Trofeo EVO2 is amazing—a great upgrade. Our baseline setup from Wayne Taylor Racing has been incredible. I can’t wait to arrive and start working through the practices and into qualifying in our No. 1 Prestige Performance race car. It’s going to be so good to see Kyle and the Wayne Taylor Racing family—they are part of my family. I miss them all and I couldn’t be more excited.”

“I’m super excited to be back with Wayne Taylor Racing at Watkins Glen. After a busy month of May that consisted of running two races on the Road to Indy here in Indianapolis and a round in NOLA with LST on three consecutive weekends, it’ll be nice to settle back into a rhythm in the month of June. This will be my first time back at Watkins Glen since my very first car race back in 2018, when I made the transition from go-karts. This is one of my favorite tracks to race on so getting to drive it in a Super Trofeo is the best of both worlds. Being back with Aidan is another opportunity to work together with my teammate and get better after we both made some huge gains in NOLA. As we keep working on our craft, communication and bond, we’re going to be a force to reckoned with when we get to the Glen next week.”

“Watkins Glen is a track I’ve had at the top of my bucket list for a long time. I’m incredibly excited. Even though I’ve never driven it in real life, it’s one of my favorite tracks to run on the simulator. I’ve done several laps around there in many different cars. It’s very fast-paced and there are high-speed corners that require great levels of commitment. With all the different classes and championships running with us on this IMSA endurance weekend, there should be more rubber buildup than usual. This will help me build speed and gain confidence with a high grip surface. I’m curious to see how the new Pirelli compound effects the overall race product. From what I’ve heard, it’s a new tire that should hold up well in the heat of battle. WTR leads the team championship and I’m looking forward to extending our own lead next weekend.”

“I’m super excited for Watkins Glen. It’s one of my favorite tracks in the U.S. with so many technical, high-commitment corners. WTR has been strong this season and I’m looking forward to getting back in the car with Tom and continuing to extend our lead in the championship. Tom and I have been a strong pairing all season long, and we want to keep the momentum going as we cross into the second half of the LST North America season.”

“I’m really excited for Watkins Glen as it’s always been one of my favorite circuits on the calendar. Having a strong start to the season in our Wayne Taylor Racing Lamborghini has been fantastic for Ashton and I, and we’re looking to continue that during this coming weekend. Leading the championship always helps, but it’s still too early to focus on that. We just need to keep executing and improving in each session of every event. Wayne Taylor Racing has been providing amazing support and prep this season, and I’m hopeful we’ll continue the strong start we’ve had to year.”

Randy Sellari, No. 3 JG Wentworth with Wayne Taylor Racing (AM)

“Watkins Glen is easily one of the most nostalgic circuits in the US. Its timeless design and unforgiving nature creates unique challenges on both driver and machine. It happens to be one of my favorite tracks, yet a podium has eluded me in all of my races there. After a strong showing at NOLA and the amount of experience I have at the Glen, I feel there is a strong chance of leaving with some hardware for myself and WTR in the AM class.”

Based in Indianapolis, Indiana, Wayne Taylor Racing is recognized worldwide for fielding championship winning sports car racing efforts since 2007. In addition to their DPi Championship titles, under the Prestige Performance with Wayne Taylor Racing umbrella, the team has run a stable of championship winning cars and drivers in the Lamborghini Super Trofeo North America series for over half a decade, forming the basis of their Driver Development Program. Since its inception in 2015, the Prestige Performance with WTR team has clinched seven North American PRO Driver, Team and Dealer Championship titles, fielded the first woman World Finals race winner and became the overall 2017 Champions at the World Finals in Imola, Italy. Their Driver Development program has grown into interim classes like IMSA GTD, as it evolves to encompass a greater variety of skill and experience levels. For more information on the team’s Driver Development Program and how to get involved, contact Travis Houge at info@waynetaylorracing.com.