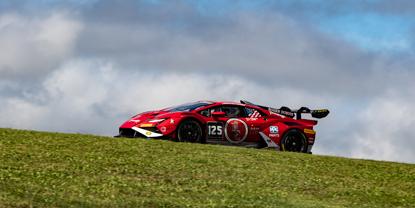 The No. 101 Prestige Performance with WTR of PRO champions Kyle Marcelli and Daniel Formal fought through the pack after an early spin to take third in Race 1, before sailing to second in Race 2. Ashton Harrison and Tom Long secured two PRO|AM trophies in their red No. 125 Harrison Contracting Company with WTR machine en route to third in their respective championship, while Randy Sellari achieved a best finish of fourth in the AM class, securing fourth in the standings for the No. 103 JG Wentworth with WTR. Jordan Missig and Aidan Yoder suffered a pair of retirements in the No. 153 Prestige car, but they are looking ahead to tomorrow’s action to finish their strong season on a high note.

“Just wrapped up the first couple of races here in Portimão at the Algarve International Circuit. What a fantastic facility and amazing racing track. We’re having a lot of fun, but it hasn’t been easy. We’re chasing car setup and fine tuning in every session. We’re making small gains, and we’re missing some outright pace, but we have a really good long run car. We had a third-place result in the first race after Danny got turned around in the first corner in damp conditions—a full 360. We came back from way back in the field. The second round was pretty uneventful—a clean race and we finished second. We’re still fully focused on that World Championship."

“It’s been a good weekend so far. Not exactly what we wanted, but we’re getting better every session. Kyle and I are adjusting to this track. It’s a very different track than what we’re used to. It’s very low-grip, very bumpy, fast at times, and then slow. There’s a balance you have to find—good drive off the corners without sacrificing high-speed grip. We’re getting closer every session. The team at Wayne Taylor Racing, Prestige Performance Lamborghini Paramus has been phenomenal all year long. The car is improving, we’re going to sit down with all the engineers to find the right setup for tomorrow because that’s what we’re all here for—to bring home the World Championship to America and to the team. 2017 was our last championship in the PRO category and we’re trying to bring it back in 2022. We finished on the podium in 11 out of 12 races, and the outlier was a top five. It’s been a fantastic season and Kyle and I are super happy with the car.”

"We knew today was Friday, but if you ask me, it felt like Friday the 13th with all of the bad luck we had. In Race 1, Aidan had a decent start, making up a couple of places on the first lap. Unfortunately, we were hit by another competitor going into Turn 1 which gave us quite a bit of body damage. With Race 2 later in the day, we decided to retire the car early to give the WTR guys ample time to work on it and fix it up the right way so it was ready to go for Race 2. I had a fantastic time battling with all the other PRO guys for about two-and-a-half laps before my alternator blew, leaving us with no power to carry on with the race. A big thank you goes out to the WTR guys for wrenching on the No. 153 throughout the course of the day today. Aidan and I will try to repay the boys and girls with some podium finishes in the Grand Finals tomorrow."

“Difficult day for the No. 153 Prestige Performance with WTR car. That certainly wasn’t the way we wanted things to end. We had contact in Race 1 and an alternator failure in Race 2, so a double DNF for us. I wanted to be able to reward the team after all the hard work they put in this week. It’s been a tiring week for the crew, with lots of sessions and setup changes, getting everything dialed-in to go fast for qualifying. Not what we wanted, but that’s racing sometimes. That’s the way these things go. The guys are hard at work tonight putting the car back together for tomorrow, and I know it will be a rocket ship. We’ll put today behind us, move on, and tomorrow’s a brand-new day. We’ll go for it in the World Finals and put that Wayne Taylor machine up front where it belongs.”

"We finished second in class in Race 1 and third in Race 2 in our Harrison Contracting Company with Wayne Taylor Racing Lamborghini, another double podium result to end a fantastic year. We had such a good championship fight, leading most of the way until a bit of bad luck and the end. It was our strongest year yet for the Harrison with WTR team and I’ve enjoyed every moment with Wayne Taylor Racing in my Super Trofeo years. I’m sad that the North America season is over, but I’m so excited for the world stage and to be sharing this with my coach, Tom. Hopefully we’ll bring home a world title, which has been a goal for my entire LST career. There was hard racing all season and I’m so proud of everyone who makes this possible!"

“It’s been a special season getting to share the Harrison Contracting Company Lamborghini with Ashton under the Wayne Taylor Racing stable. This year had highs and lows and we all know motorsport can be. But I’m so pleased to end it on a high note during the Grand Finals event in Portugal with a double podium result. The team has executed flawlessly this year and deserves every bit of the credit. Ashton has come such a long way as a driver over the course of the season and it’s remarkable to see her performance fighting for class wins!"