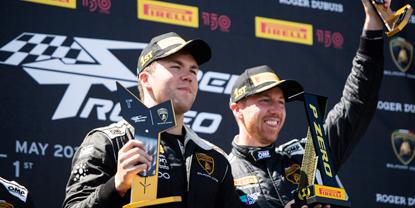 Danny Formal and Kyle Marcelli, drivers of the No. 1 Prestige Performance with WTR car, captured overall victory in the first race of the season on Saturday afternoon. Formal made the ‘move of the century’ on the opening lap, diving up the inside and into the lead at the Corkscrew turn. Marcelli inherited the lead and drove quickly and consistently, sealing the result. Race 2 was made difficult by an early spin that relegated Marcelli to the back of the pack. He fought his way to P11 by the halfway point, handing the car to Formal in position to fight for a PRO class podium. Formal made a number of impressive overtakes, pressuring for the lead on the final lap. He finished mere tenths behind the leader, securing second position overall and the pairing’s second podium from two attempts.

Like their PRO teammates, Ashton Harrison and Tom Long won the first race of the year in the PRO|AM class in the No. 25 Harrison Contracting Company with Wayne Taylor Racing LST. Harrison put together an impressive drive, earning the win on-track. Carrying their momentum into the second day, they scored a hard-fought podium in Race 2, each making aggressive overtakes during their respective stints on the way to second position.

Impressively, Aidan Yoder made his IMSA debut in the PRO class of a stacked LST field. He commandeered his No. 53 Prestige Performance with Wayne Taylor Racing machine to a best finish of sixth in class on the weekend, improving and making strides in each new session.

Randy Sellari’s pace was looking strong in the No. 3 JG Wentworth with Wayne Taylor Racing LST in both races this weekend. Unfortunately, contact with competitors resulted in late spins each time of asking. Despite a resultant penalty in Race 1, he retained second position for his first podium of the season (pending official results). The 2020 LB Cup Champion will look to secure a strong result for Rounds 3 and 4 next month. The 2022 Lamborghini Super Trofeo North America season resumes next month on May 20th.

“We started the race on a perfect note. Danny got the lead early at the start. He and the second-place car stretched out a good margin over the third-place car. I took over, and we continued to extend the lead. A late caution bunched the field up, but I didn’t feel too threatened. We had a good race car and we had a really good long run race car on the used tire. After the restart we were able to open-up that lead again and take the win. A perfect start to the season for Prestige Performance and Wayne Taylor Racing. Personally, it was not the start I wanted in Race 2. Off the line ,we had a really good start and it looked like we were going to take second position from Spinelli. I had the inside line, had to stay committed and ran up on the bumper of the car in front of me. We were side-by-side through Turn 1. My right front hit his left rear on cold tires and it turned me around. It was a racing incident. Spinelli certainly didn’t intend to do it and neither did I, but frustrating nonetheless. We went all the way back to last. I climbed back to P11 overall. We made our stop and Danny continued the tear and we got up to second. A caution helped us. A first place and second place, leaving Laguna Seca and almost had a win today. Danny was pushing real hard at the end and I wanted it for him. I’m gutted—you’re gutted any time you make a mistake and don’t fully capitalize one-hundred percent. Almost a picture-perfect weekend with two wins, but it’s not bad. We’ll take it.”

“A first place and a second place in the first round of the Lamborghini Super Trofeo season. The second place felt as good as the win, in my opinion. It was one of the best races I’ve done in IMSA. I was almost eight seconds back from the leader coming out of the pits and we finished the race two tenths behind him after passing six other cars. It was amazing. I’m so thankful for Prestige Performance, Wayne Taylor Racing, Lamborghini Paramus and everyone in the team, especially Kyle. Kyle Marcelli did a fantastic job today and all weekend. He had a tough weekend, but he kept his head high and it was impressive. We had great pace. I’m excited for NOLA. I’ve been there in karting, but never in cars. It looks like a fun high-speed, low-grip surface and that’s my sweet-spot. I’m super motivated.”

“I’m super excited about our start to the Lamborghini Super Trofeo season. I’m pretty sure that today’s result puts Tom and I in the lead of the championship points heading into NOLA. Our Harrison Contracting car was so strong and Tom and I are a great pairing in the PRO|AM class. We’ve come a long way in Super Trofeo and I’m excited to see the program coming to fruition and being able to be a part of it. I can’t wait for the second round.”

“An excellent weekend for Ashton Harrison and Wayne Taylor Racing. I couldn’t be more excited that we came away from the weekend with two podium finishes and a win. It was a really, really hard fight out there in Race 2. We came out of the pits in P4 and had to work through traffic to make headway in our class. We made it up to second position. I thought we might’ve had something for the leader, but by the time I got through to P2 he was checked out. Overall, it’s an incredible result for our first event as a team. This is really my first time driving the car in anger. Every lap, I’m learning something and putting it together. We’ve got a great shot at making a run for the championship this year.”

“It was an incredible weekend, overall. I came in with the intention of learning as much as I could and absorbing information from all the Wayne Taylor Racing drivers. I found myself getting more and more comfortable in the car throughout each practice session. I was faster in each consecutive session and throughout qualifying. In Race 2, I ended with what I felt was my best drive of the weekend. There’s a lot to be proud of. I learned a lot about the tires and the car and it was a huge confidence builder this weekend.”

Based in Indianapolis, Indiana, Wayne Taylor Racing is recognized worldwide for fielding championship winning sports car racing efforts since 2007. In addition to their DPi Championship titles, under the Prestige Performance with Wayne Taylor Racing umbrella, the team has run a stable of championship winning cars and drivers in the Lamborghini Super Trofeo North America series for over half a decade, forming the basis of their Driver Development Program. Since its inception in 2015, the Prestige Performance with WTR team has clinched seven North American PRO Driver, Team and Dealer Championship titles, fielded the first woman World Finals race winner and became the overall 2017 Champions at the World Finals in Imola, Italy. Their Driver Development program has grown into interim classes like IMSA GTD, as it evolves to encompass a greater variety of skill and experience levels. For more information on the team’s Driver Development Program and how to get involved, contact Travis Houge at info@waynetaylorracing.com.