For the driver pairing of Filipe Albuquerque and Ricky Taylor, the triumph marks their second Laguna Seca victory in a row for the team. Individually, it’s Ricky Taylor’s third consecutive victory at the Northern California road course. 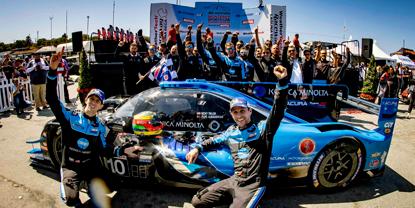 The No. 10 Konica Minolta Acura ARX-05 team achieved a well-deserved victory at WeatherTech Raceway Laguna Seca on Sunday afternoon, leading the second Acura one-two finish of the season. The win is the team’s first of the year, and crucial in their quest for the 2022 IMSA WeatherTech SportsCar Championship title. The team is now tied for the lead in the overall standings with 1,325 points with their sister Acura, the No. 60 MSR Acura team.

For the driver pairing of Filipe Albuquerque and Ricky Taylor, the triumph marks their second Laguna Seca victory in a row for the team. Individually, it’s Ricky Taylor’s third consecutive victory at the Northern California road course.

“A great day for Acura, first of all,” said Ricky Taylor. “It’s their second one-two finish of the season and their fourth straight win at Laguna Seca. We knew it would be a strong one for us and we knew that having Acura finish one-two and maximize the points was the goal. It’s nice that we had the Konica Minolta Acura leading the charge. I can’t say enough about the team executing. All we needed to do this weekend was execute and do what we knew the car was capable of. To come away with maximum points and really close the gap in the championship was good.”

Taylor looked unimpeachable from the off, widening the gap to five seconds before an early caution bunched the field and he handed the controls to Filipe Albuquerque under yellow.

Albuquerque ran the bulk of the race, constantly under pressure from the sister Acura from behind. He fell to second place after a pit stop with an hour and fifteen minutes remaining, but wasted no time retaking the lead. In the end, the two Acuras were separated by a second—a dominant performance for the brand and a statement victory for WTR.

“I’m happy and relieved at the same time,” said Filipe Albuquerque. “We came to Laguna with a sense of duty. This is our best race track and it suits our car the best. We needed maximum points. It’s always easy to say, but knowing that we have that responsibility, doing it is a different thing. There was a weight of a lot of pressure on top of us. I was just happy that Ricky did an amazing job in qualifying, securing pole by eight one-hundredths of a second. Taking off, it seemed like we were in control, but whenever I was pulling away, traffic was pushing me back. I was frustrated for a good portion of the race. When I was P2, I was really mad. I couldn’t believe it. I’m happy that I found a little gap to put the car through and get the position back. Again, I was managing the race with the following car in my mirrors, but he never had a move to make on me. I’m glad those laps are over, but the car was great and the team did an amazing job.”

“I’m so proud of this team,” said team owner Wayne Taylor “These two drivers are incredible. The strategists are incredible. The mechanics, the support from HPD and Acura, our partners at Konica Minolta and Harrison Contracting—they make this happen. There’s no one person that makes this happen. It’s the whole group and we’re now tied with the No. 60 Acura ARX-05 for the lead of the championship”

The 2022 IMSA WeatherTech SportsCar Championship season continues for the No. 10 Konica Minolta Acura ARX-05 in two week’s time with another sprint race, the Lexus Grand Prix of Mid-Ohio. Practice 1 begins at 4:00 p.m. ET on May 13th. Green flag for the two-hour and 40-minute sprint waves at 2:10 p.m. ET on Sunday, May 15th. Full coverage, starting at 2:00 p.m. ET, can be streamed on Peacock or viewed on USA Network.