Ricky Taylor, Filipe Albuquerque and the No. 10 Konica Minolta Acura ARX-05 team ended up fourth In the Motor City this weekend. The team is now second in the IMSA WeatherTech SportsCar Championship (DPi) standings with four races remaining. 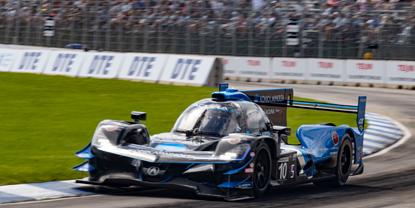 Ricky Taylor, Filipe Albuquerque and the No. 10 Konica Minolta Acura ARX-05 team achieved a fourth-place finish in the Motor City this weekend. The team is now second in the IMSA WeatherTech SportsCar Championship (DPi) standings with four races remaining.

At the drop of the green flag, Taylor got away cleanly into the first corner, driving a fast and consistent opening stint. The American drove strong until he pitted with 59 minutes remaining and Filipe Albuquerque took control of the No. 10 Konica Minolta Acura ARX-05 after a perfect pit stop by the Konica Minolta crew.

With strategy proving to play a crucial role throughout the race, the team elected to take an extra pit stop, gambling that the other teams would have to make a final splash and go as well.  Unfortunately, the strategy didn't play out as hoped and Filipe crossed the finish line fifth. Post race, when a competitor failed Tech Inspection, the No. 10 Konica Minolta Acura ARX-05 team moved up to fourth.

“Today was a rough day,” said Ricky Taylor. “The car was strong all weekend and the team did a good giving us a solid race car. A little bit of traffic in the early stages of the race separated us from the two leaders and we decided to make something happen by going off strategy. At the end of the day, we took a chance, and it didn’t pay off. You can’t blame anyone for trying to win the race. We got the lead of the championship by taking risks trying to win, and the team was trying to win the race again today and it didn’t pay off. Unfortunately, we lost a lot of points, but we’ll go to Watkins Glen which is a really good track for us and hopefully make it back up there.”

“Oh boy. Hard race for us,” commented Filipe Albuquerque. “We were having a good weekend and good pace, but the race was a good example when everything goes wrong. Ricky and the team did their best, it just didn’t pay off. We’re for sure going to analyze and investigate what went wrong and why things led us to make those decisions. This isn’t typical for Wayne Taylor Racing: starting in the front with a competitive car and finishing behind. No one is perfect. We just need to analyze and come back stronger.”

“Disappointed,” said team owner Wayne Taylor. “We have to regroup and see what happened here. We had a fast car all weekend until we got to the race and then we had a fuel problem. We tested well at Watkins Glen, so we will look ahead to the Six Hours later this month.”

The 2022 IMSA WeatherTech SportsCar Championship season continues for the No. 10 Konica Minolta Acura ARX-05 with the third endurance race of the year, the Sahlen’s Six Hours of the Glen, on June 23rd-26th. Practice 1 begins at 4:30 p.m. ET on June 24th. Green flag for the 6-hour battle waves at 10:40 a.m. ET on Sunday, June 26th. Full coverage can be streamed on Peacock with partial network coverage on USA Network beginning at 2:00 p.m. ET.