Mission accomplished for COOL Racing / CLX Motorsport team as they finished 7th in the LMP2 class at the 2022 24 Hours of Le Mans. Twenty-seven LMP2 cars had entered this 99th edition of the race. Behind the wheel of the #37 ORECA 07, Yifei Ye, Niklas Kruten, and Ricky Taylor showed great speed as they raced among the fastest cars in such a competitive class. 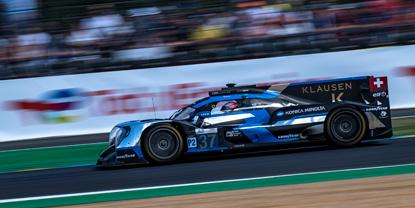 Mission accomplished for COOL Racing / CLX Motorsport team as they finished 7th in the LMP2 class at the 2022 24 Hours of Le Mans. Twenty-seven LMP2 cars had entered this 99th edition of the race. Behind the wheel of the #37 ORECA 07, Yifei Ye, Niklas Kruten, and Ricky Taylor showed great speed as they raced among the fastest cars in such a competitive class.

Though COOL Racing had already competed in the 24 Hours of Le Mans back in 2020, this was the first time that the team had entered the event together with technical structure CLX Motorsport, which had lined up international trio Yifei Ye, Niklas Kruetten, and American driver Ricky Taylor. The latter joined his Chinese and German fellows who usually compete in the European Le Mans Series alongside Nicolas Lapierre.

Following on practice sessions focused on preparation, the #37’s trio showed strong potential in race. Thanks to an impeccably reliable car, COOL Racing performed very well throughout this year’s edition of the 24 Hours of Le Mans. Having started from the sixth row, the team quickly climbed up the standings, gaining several positions and reaching the 7th place in class before the first hour of the race was even gone. Yifei, Niklas, and Ricky then settled within the top five. Six hours into the race, they moved up to second place.

The car was fast, fighting against leaders in class such as Jota Sport (this year’s winner), United Autosports, and WRT (defending champion). After some great duels on track, the team had to deal with different race incidents, including tyre delamination issues meaning that they had to pit several additional times. Despite these problems, the #37 was still hanging on in the top five at dawn. Yet several slow zones then got declared following on track incidents and the team had to make do with that. Having relentlessly battled for a spot in the top five, the team delivered one of the best performances throughout and crossed the finish line in 7th place in class, 11th overall. In addition to their 7th place, COOL Racing / CLX Motorsport posted the sixth fastest lap time. This convincing first performance augurs well for the future.

"I am very thankful for the opportunity to join COOL racing, said Two-Time IMSA WeatherTech SportsCar Champion, Ricky Taylor. « The team is young and exciting and showed that they can fight at the highest level. We showed great speed and ran a very solid race. My teammates Yifei and Niklas were stars. It was wonderful to share the car with them"

As part of the 24 Hours of Le Mans, COOL Racing / CLX Motorsport also took part in the Michelin Le Mans Cup round with two Ligier JS P320s, as well as in the Ligier European Series with a Ligier JS 2R. The team won Road To Le Mans’s second race with Michael Benham and Duncan Tappy. Mo Smith and Malthe Jakobsen are second in the championship.

"This was the first time that a team had participated in this configuration," said Team Principal Nicolas Lapierre. "I was proud to see the team entering the 24 Hours of Le Mans just over a year and a half after its creation. It also felt like a great responsibility. The team showed good qualities in terms of both reliability, which showed that quality work was delivered throughout the preparation time, and of performance as the car battled against unquestioned leaders of the discipline. The final outcome is not what we’d hoped for or wanted, but we’re satisfied. There’re many positive aspects to this first experience and many lessons to be learnt so that we come back stronger. We’ve shown some of our potential. This is an important step in building and developing the team. We also took part in Road To Le Mans with two Ligier JS P3s, as well as in the Ligier European Series.”

"The team achieved its prime objective which was to finish the 24 Hours of Le Mans and the car did not encounter any problems," added Team Manager Anthony Megevand. "It's a real satisfaction and it shows how good all of the preparation work done by the team was. We’ve also delivered a good performance, battling against some very strong teams. Not only it’s confirmed that our team can race at the best level, but it’s also motivated us for the future. We always want to improve and aim higher. We have to go step by step and this legendary and incredibly demanding race was one of them, an important milestone in our endurance programme. Just like the young yet experienced technical structure, our trio of drivers can be proud of what they’ve achieved and delivered on track, having rivalled World Endurance Championship contenders. We’re now going to capitalise on this 24 Hours of Le Mans experience to best prepare future races. It’s a catalyst for what’s to come.”