Ricky Taylor, Filipe Albuquerque, Alexander Rossi and the No. 10 Konica Minolta Acura ARX-05 team continued to hold first position in the IMSA Michelin Endurance Cup DPi Championship with a total of 33 points, and the overall WeatherTech SportsCar Championship lead with 1,733 points by a slim margin of 31 points over the No. 55 Mazda DPi team. 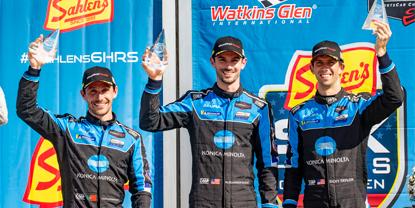 Ricky Taylor, Filipe Albuquerque, Alexander Rossi and the No. 10 Konica Minolta Acura ARX-05 team managed challenging conditions to bring home a podium finish at the Sahlen’s Six Hours of The Glen. They continue to hold first position in the IMSA Michelin Endurance Cup DPi Championship with a total of 33 points, and the overall WeatherTech SportsCar Championship lead with 1,733 points by a slim margin of 31 points over the No. 55 Mazda DPi team.

Amidst grueling heat, Ricky Taylor looked competitive from the start at the demanding Watkins Glen International road course. He traded the lead with the No. 60 Meyer Shank Racing Acura multiple times in the opening stint. The highlight of the early running was a four-wide dash past lapped traffic by the leading pair of Acuras, culminating in a daring dive by Taylor up the inside of Turn 1 for the lead.

Alexander Rossi climbed aboard with four hours to go. After shuffling back in the pit cycle, his winning experience at the New York venue showed, as he moved from P4 up to P2, challenging for the lead.

As the race wore on, the drivers began to struggle with the front-end balance of the car. Filipe Albuquerque took the wheel with 118 minutes to go and managed the understeer to keep the No. 10 Konica Minolta Acura ARX-05 within seconds of the lead. After a late caution, Albuquerque got an excellent launch at the restart and ran door-to-door with Kevin Magnussen and his No. 01 DPi for the entire first sector of the lap. He eventually passed the Cadillac and managed fuel consumption to the end. Ultimately, the team’s fourth podium out of five race starts in 2021 keeps Wayne Taylor Racing in the championship hunt in what is shaping up to be one of the most competitive years in recent memory.

“It’s nice when you can be a little disappointed with third,” said Ricky Taylor. “We showed great pace over the weekend. The No. 10 Konica Minolta Acura ARX-05 team did a great job on strategy and execution. We weren’t in a position to take risks, looking at the big picture of the championship and the three-hour mark for the NAEC. That’s the way the cards fell today. My teammates did great. With Alex, once again, we’re able to plug him in and he just does a fantastic job. Filipe did an amazing job on fuel at the end and was able to hold off some cars that were full of gas. We’ll walk away with our heads held high, maintaining the points lead and move onto the next round.”

“Starting from pole we always expect to win,” Filipe Albuquerque elaborated. “In IMSA, it’s been quite competitive between everyone, and the race is always different. We struggled a little bit, and it was a game of strategy with how much fuel to put in. I came fourth from the last pit stop. I still managed to go third which was all we could do, I believe. The first two guys were already off, and we had to fuel save for strategy. I don’t think we could have done much better, we just have to work harder for the next weekend.”

“Watkins Glen is done, and we finished third,” commented Alexander Rossi. “It’s pretty unsatisfying since we started on pole thanks to Ricky. We’ll have to figure out why the Mazda was able to jump us in that last pit sequence which was pretty impressive and set the tone for the race. We had okay pace. It depended on the tire life where I think we were missing a bit of ultimate pace. The car performed well, the team did great in the pit stops, the strategy was good, and the Acura fuel mileage there at the end was pretty phenomenal for us to be able to make it. Great points for the No. 10 Konica Minolta Acura ARX-05, for Ricky and Filipe. We’ll go forward to the next one. I won’t see you guys until November, but in the meantime stay tuned, I’ll be cheering these guys on.”

“A podium is always good,” said team owner Wayne Taylor. “It was the Mazda that we were racing in the championship, so they recovered good points, but we got the pole and gained some points on them. The No. 60 car was very fast. I was hoping that they would’ve won because it would’ve helped us more in the championship. The guys were strong as usual and now we have to prepare for next weekend.”

The 2021 IMSA WeatherTech SportsCar Championship returns to Watkins Glen in less than a week's time for the circuit’s Sprint Cup event, the IMSA WeatherTech 240 at The Glen, taking place July 1-2. Coverage of qualifying airs at 5:35 p.m. ET, July 1 on IMSA.TV. Green flag for the two-hour and 40-minute race will wave at 6:10 p.m. ET with live coverage starting at 6:00 p.m. ET on NBC Sports and TrackPass on NBC Sports Gold.

Konica Minolta Business Solutions U.S.A., Inc. is reshaping and revolutionizing theWorkplace of the Future™. The company guides and supports its customers’ digital transformation through its expansive office technology portfolio, including IT Services (All Covered), content services, managed print services and industrial and commercial print solutions. Konica Minolta has been included on CRN’s MSP 500 list nine times and The World Technology Awards recently named the company a finalist in the IT Software category. Konica Minolta has been recognized as the #1 Brand for Customer Loyalty in the MFP Office Copier Market by Brand Keys for fourteen consecutive years, and received Keypoint Intelligence’s BLI 2021 A3 Line of The Year Award and BLI 2021-2023 Most Color Consistent A3 Brand Award for itsbizhub i-Series. Konica Minolta, Inc. has been named to the Dow Jones Sustainability World Index for nine consecutive years and has spent four years on the Global 100 Most Sustainable Corporations in the Worldlist. Konica Minolta partners with its clients to give shape to ideas and works to bring value to our society. For more information, please visit usonline and follow Konica Minolta onFacebook,YouTube,LinkedIn andTwitter. Wayne Taylor Racing’s existing lineup of partners that also featuresHarrison Contracting,Acura Motorsports,Hammer Nutrition andCIT.