The team extended their lead in the WeatherTech SportsCar Championship by 81 points over their closest rivals, the No. 55 Mazda Motorsports DPi, bringing their points total to 2,068. 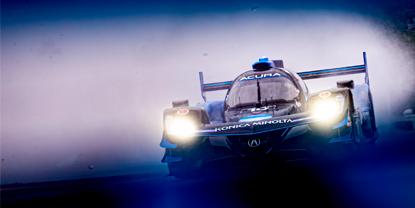 Ricky Taylor, Filipe Albuquerque and the No. 10 Konica Minolta Acura ARX-05 team finished third in a challenging, lightning storm affected WeatherTech 240 at the Glen. The team extended their lead in the WeatherTech SportsCar Championship by 81 points over their closest rivals, the No. 55 Mazda Motorsports DPi, bringing their points total to 2,068.

Ricky Taylor got away phenomenally at the start. The No. 55 Mazda pressured him as he saved fuel early, but he pushed ahead to hand Filipe Albuquerque the lead with two hours to go.

After close battles with the No. 31 Cadillac and No. 55 on his out laps, Albuquerque held second place as the pit stops cycled through. His track time on the weekend was limited by rain in practice, but Filipe adapted quickly. At the one-hour and 35-minute mark, lightning struck during a full course caution, bringing the race to a halt. Per IMSA regulations, the clock continued to run under the red flag. The field went green with 36 minutes to go, only to be yellow flagged again straight away.

On a damp and difficult surface, Filipe fell back to fourth at the final restart. As time ticked down and the sun set on the Finger Lakes, he fought with the No. 5 Mustang Sampling Cadillac ahead, getting pushed wide through Turn 7. He recovered brilliantly to retake the position, finishing on the podium for the fourth race in a row and the fifth time in six races.

“The No. 10 Konica Minolta Acura ARX-05 team should be quite happy,” said Ricky Taylor. “We increased our points lead, but it was a difficult race today. Filipe did an amazing job dealing with difficult conditions. The cars ahead of us were in a position where they could take more risks and we put Filipe in the car with no practice laps. He got right into the fight and brought us another podium finish. We are five for six on podiums and that’s what wins championships. We need to continue on this trend and the team is still executing well. It’d be nice to get on the top step of the podium before the year’s out, but I think if we keep trending this way we can continue to control the championship.”

“We started really well with Ricky qualifying on pole position by four tenths,” Filipe Albuquerque elaborated. “Great job by him. Obviously, we made adjustments from the previous weekend so we really felt that we’d tuned it up. As the race went on, straight away, it seemed we weren’t as strong as we’d thought. The No. 55 Mazda was strong and the deltas to the Cadillacs were closer. Ricky held on really well and the strategy came along. The No. 31 Cadillac got a bit lucky, pitting one lap before the red flag which was an advantage to them. On the restart, I was P2 and unfortunately lost a position with a wiggle there, and then the rest of the race was really tricky for me since it was wet in four corners and dry in the others. Good fight with the No. 5 car. In the end, we came home with P3. We’re happy, but not 100% happy, because we want to win. We finished ahead of the Mazda and gained points on them in qualifying and the race which is good for the championship. Others, like the No. 31 and No. 01, are starting to make moves and are just behind in the championship, so we need to keep pushing!”

“Another podium for the No. 10 Konica Minolta team,” said Wayne Taylor. “We still maintain our points lead, which is really what we’re fighting against. It was a strange race. We led for quite a long way and then we had the red flag. I thought we would have been second, but the No. 01 car managed to get past us. Then the No. 5 car got by us, he actually pushed us, and I was happy that Filipe got back past and put us back on the podium. Decent weekend. Looking forward to Road America next month.”

The No. 10 Konica Minolta Acura ARX-05 2021 returns to the track for the IMSA SportsCar Weekend at Road America on August 6th. Practice begins on Friday at 6:15 p.m. ET. Green flag will wave on Sunday, August 8th at 2:40 p.m. ET with live coverage on TrackPass on NBC Sports Gold.

Konica Minolta Business Solutions U.S.A., Inc. is reshaping and revolutionizing the Workplace of the Future. The company guides and supports its customers’ digital transformation through its expansive office technology portfolio, including IT Services (All Covered), content services, managed print services and industrial and commercial print solutions. Konica Minolta has been included on CRN’s MSP 500 list nine times and The World Technology Awards recently named the company a finalist in the IT Software category. Konica Minolta has been recognized as the #1 Brand for Customer Loyalty in the MFP Office Copier Market by Brand Keys for fourteen consecutive years, and received Keypoint Intelligence’s BLI 2021 A3 Line of The Year Award and BLI 2021-2023 Most Color Consistent A3 Brand Award for its bizhub i-Series. Konica Minolta, Inc. has been named to the Dow Jones Sustainability World Index for nine consecutive years and has spent four years on the Global 100 Most Sustainable Corporations in the World list. Konica Minolta partners with its clients to give shape to ideas and works to bring value to our society. For more information, please visit us online and follow Konica Minolta on Facebook, YouTube, LinkedIn and Twitter. Wayne Taylor Racing’s existing lineup of partners that also features Harrison Contracting, Acura Motorsports , Hammer Nutrition  and CIT.