Ricky Taylor, Filipe Albuquerque and Alexander Rossi will pilot the No. 10 Konica Minolta Acura ARX-05 around the historic Sebring International Raceway 3.74-mile track in the Mobil 1 Twelve Hours of Sebring, looking for their second victory in as many races. 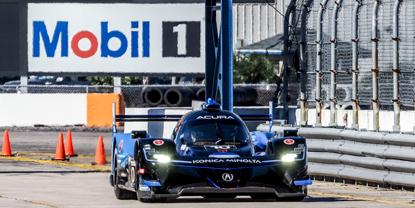 The No. 10 Konica Minolta Acura ARX-05 team has its sights set on another strong performance in the second endurance event of the 2021 IMSA WeatherTech SportsCar Championship season having started the year with an extraordinary win at the Rolex 24 at DAYTONA. This weekend, Ricky Taylor, Filipe Albuquerque and Alexander Rossi will pilot the No. 10 Konica Minolta Acura ARX-05 around the historic Sebring International Raceway 3.74-mile track in the Mobil 1 Twelve Hours of Sebring.

With seven starts to the team’s name in the iconic 12-hour race, the No. 10 Konica Minolta Acura ARX-05 team has one victory, three top-two finishes and a total of 193 laps led. Ricky Taylor was behind the wheel when the team secured victory in 2017, which also came off the back of a victorious outing at the Rolex 24 at DAYTONA. As a result, Taylor hopes history can repeat itself with the No. 10 Konica Minolta Acura ARX-05 team securing a second unofficial Florida 36 Hour with victories at both the 2021 Rolex 24 at DAYTONA and Sebring 12 Hour.

“Sebring is such a difficult event,” commented Ricky Taylor. “It is always the one on the schedule that you earmark as the event you want to win because of the satisfaction of overcoming all the obstacles that come with racing at Sebring, such as the bumpy track surface and temperature changes throughout the day. And, for the championship, it sets a critical tone for the rest of the season. We are coming off a big win and have great momentum, so another strong result in the 12 hour will allow us to settle into the sprint season with some energy.”

Filipe Albuquerque hopes for his first Mobil 1 Twelve Hours of Sebring win after finishing on the podium three times. The Portuguese driver was an integral part of the No. 10 Konica Minolta Acura ARX-05 winning team at this year’s Rolex 24 at DAYTONA and will continue to use that determination this weekend.

“Sebring is an event I’ve never won in my life,” said Filipe Albuquerque. “I really want to do it this year. We just had a test at Sebring, and we gathered important information about the car. I think we’re really ready, and we’re going to be very strong for sure and a contender for the win. But again, this year is going to be very competitive like it was at Daytona. The competition is very hard, but we are ready to go, let’s go!”


This will be Alexander Rossi’s third Mobil 1 Twelve Hours of Sebring. The American has one pole starting position and two top-ten finishes in the iconic race.

"Really excited to re-join my Wayne Taylor Racing teammates this weekend in Sebring,” said Alexander Rossi. “I feel like the Acura ARX-05 has a lot of momentum, even stemming back to the rescheduled Sebring race last year, then obviously most recently with our 24-hour win in Daytona a couple months ago. If we could go back-to-back with endurance wins, that would be pretty cool. Have no doubts the No. 10 Konica Minolta Acura ARX-05 crew is ready to conquer Central Florida."

Wayne Taylor has experienced great success in the Mobil 1 Twelve Hours of Sebring having won the event in 1996 as a driver and in 2017 as a team owner. The South African was inducted into the Sebring International Hall of Fame in 2014.

“After winning the Rolex 24 and having a fairly successful test in Sebring it seems like everyone is within tenths of a second, so it could make for a really good race,” mentioned Wayne Taylor. “I’m also happy that they have left the BOP as it was at the end of last year, so that’s a real positive. This race is going to come down to the same items as Daytona which is to stay off the curb and to only come into the pits for driver changes and fuel. I think we have three of the best drivers in the paddock and the best team in the paddock, so I’m looking forward to it.”