The No. 10 Konica Minolta Acura ARX-05 finished in the fourth position for the 69th annual Mobil 1 Twelve Hours of Sebring after battling adversity despite showing strong speed for the majority of the historic race event. 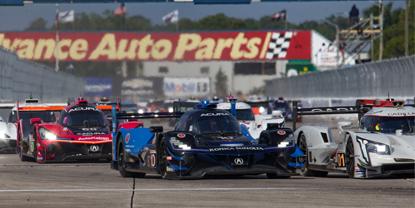 The No. 10 Konica Minolta Acura ARX-05 finished in the fourth position for the 69th annual Mobil 1 Twelve Hours of Sebring after battling adversity despite showing strong speed for the majority of the historic race event.

Ricky Taylor took the green flag at 10:10 a.m. ET and immediately started on the front foot, demonstrating excellent speed throughout the opening stints. Teammates Filipe Albuquerque and Alexander Rossi were in a similar mood, as they too continued to maneuver the blue and black No. 10 Konica Minolta Acura ARX-05 at the sharp end of the field.  However, misfortune struck with 3 hours and 46 minutes remaining when Albuquerque was involved in an unfortunate incident with a GTD car at Turn 7.

As a result of the incident, the No. 10 Konica Minolta Acura ARX-05’s speed was compromised for the remainder of the race and despite the setback, the team soldiered on to the finish to secure important points in the championship chase.

“We came away today with some decent championship points,” said Ricky Taylor. “The entire team did a great job today. We had a fantastic car all weekend. The car was so strong and it’s such a shame that we were fighting a bit wounded at the end of the race. Filipe and Alex did an awesome job and all the calls throughout the day were great. Our main rivals, the No. 31 and the No. 01, had more misfortune than we did, so we have a little bit of a buffer going into the remainder of the season. There are so many good cars and we’re going to have to continue to fight in Mid-Ohio.”

“Sebring was being Sebring tonight,” said Filipe Albuquerque. “Chaotic, crazy, unpredictable. There were so many ups and downs for everyone. We finished fourth and we couldn’t do any better, we had two penalties and a lot happened to us. We were still in contention, but then we had a problem on track which enabled us not to fight with fair tools. Alex did what we could with what he had. So, fifth is okay in the championship when a couple other teams had bigger problems than us. It’s a shame not to win again when we were looking so good today.”

“The day was really promising at times,” mused Alexander Rossi. “At various stages the No. 10 Konica Minolta car was the car to beat. Everything was looking really good for the first eight hours of the race, but with these endurance races there are a lot of variables and things that can happen. We seemed to have some sort of mechanical issue that prevented some straight-line and acceleration performance. It lasted for the final three and a half hours of the race, so it made our job really difficult. We were in good position when we could run by ourselves, but as soon as we stacked up with restarts it exacerbated the issue that we had, but such is racing. The car is home in one piece, and I think everyone on the team did a great job.”

“It was a bit of a rough day,” said Wayne Taylor. “Our guys never gave up as usually. The drivers did a good job, and we had a good strategy. We really had a good car, but we just had an unfortunate incident and then got two drive through penalties. With that incident we broke an engine component, so we were a bit down on power. We still got some solid points as we look to the first sprint race of the season in May.”

The 2021 IMSA WeatherTech SportsCar Championship returns to action May 14-16 for the Acura Sports Car Challenge of Mid-Ohio which is the first sprint race of the season. Full time drivers Ricky Taylor and Filipe Albuquerque will be on hand as the No. 10 Konica Minolta Acura ARX-05 look to continue their quest for the championship.