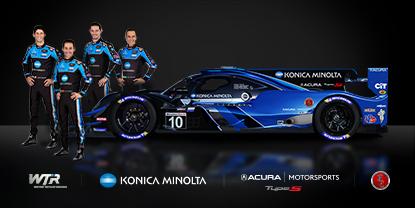 The 2021 IMSA WeatherTech Sportscar Championship season officially kicks off this weekend at the Daytona International Speedway at the annual Roar Before the 24 test event. The No. 10 Konica Minolta Acura ARX-05 will return the following weekend, January 30th|31st for the series season opener, the Rolex 24 at Daytona, where the team Is focused on winning their third Rolex 24 at DAYTONA victory in a row and fourth overall, a feat last accomplished by Chip Ganassi Racing in 2008.

The Roar Before the 24 will introduce a brand new qualifying format to determine the 59th Rolex 24 at DAYTONA starting grid with a 100-minute qualifying race on Sunday, January 24th. Each entrant will have two drivers per car in the hunt for the Motul Pole Award.

With three very successful years with Acura and Honda Performance Development (HPD) under his belt to-date, 2020 IMSA WeatherTech Sportscar champion Ricky Taylor returns to the No. 10 Konica Minolta team. A veteran to the IMSA podium, Taylor holds two driver championships, one Rolex 24 at DAYTONA victory, one 12 Hours of Sebring victory, and 24 wins.

“It has been incredibly busy for everyone at WTR to learn a completely different racecar in the ARX-05,” commented Ricky Taylor. “It has been so encouraging to see how seamlessly the relationship between Acura, HPD, and WTR has been built. The program already has a winning feeling to it, and I think everyone is thrilled about the possibilities. The Roar Before the 24 is always a busy event, but this year’s will be unprecedented because of the amount of knowledge we are hoping to gather leading into the Rolex 24 at DAYTONA only one week later.”

Filipe Albuquerque joins the No. 10 Konica Minolta Acura ARX-05 team after a fruitful 2020 season where the Portuguese driver became the 2020 European Le Mans champion, LMP2 World Endurance champion, and winner of the 24 Hours of Le Mans. The veteran sportscar driver also has one overall and one class Rolex 24 at DAYTONA victory to his name.

“Daytona is a very special race and one of my favorites for many reasons. There’s the track, the ambiance, and with it being the first race of the year we have the feeling of a new start of a season,” said Filipe Albuquerque. “At the Roar you get to see everyone again, all the competitors and old friends to see what they have been working on to be better. Everyone in the race world knows exactly the feeling. I just can’t wait to get my hands on the Acura ARX-05. I am so anxious that I compare this time to when I first started my career.”

Alexander Rossi will drive the No. 10 Konica Minolta Acura ARX-05 at the Rolex 24 at DAYTONA, the Mobil 1 Twelve Hours of Sebring, and the MOTUL Petit Le Mans endurance events in the 2021 IMSA WeatherTech Sportscar Championship season. The seven-time INDYCAR race winner and 2016 Indianapolis 500 champion rejoins Ricky Taylor and Helio Castroneves after achieving two podiums in his five IWSC races with Acura to-date.

“I’m very excited to get back to work at Daytona in the Acura ARX-05 DPi car,” said Alexander Rossi. “The Roar is going to be a very important couple of days for the whole team to get up to speed with this new package, but I know how detailed WTR has been in terms of making sure we are as prepared as possible going into the event. Fortunately, myself, Ricky, and Helio are incredibly familiar with the car so I feel like we will be able to get everything up to speed very quickly and smoothly.”

The Rolex 24 at Daytona will be the only race with Wayne Taylor Racing, but the 2020 IMSA WeatherTech Sportscar Champion, three-time Indianapolis 500 champion and 24-time INDYCAR race winner, Helio Castroneves, will bring his skill and experience of both the Acura ARX-05 and the 24 endurance classic to the team.

“2021 is here and there a lot of new things happening,” expressed Helio Castroneves. “The Roar will be my first racing action with Wayne Taylor Racing and the No. 10 Konica Minolta Acura ARX-05 while continuing what Ricky Taylor, Alexander Rossi and I left from last year. And with the addition of Filipe, I can see we are forming a great team and getting ready for the Rolex 24 at DAYTONA."

Wayne Taylor enters his 15th season as a team owner with high expectations for the No. 10 Konica Minolta Acura ARX-05 team. After a strong 2020 season where the team brought home the winner’s trophies at the Rolex 24 at DAYTONA, Motul Petit Le Mans, and secured the 2020 IMSA Michelin Endurance Cup for the first time, Taylor is looking to bring Acura it's first prototype victory at Daytona.

“It has been a very short off season,” said Wayne Taylor.” And I don’t think anyone could have made so many changes like we have in these two months. I don’t know where we would be without Travis Houge, Brian Pillar, and the entire crew. They have been working nonstop and I just hope they get enough sleep! This has been such a team effort for everyone who works for Wayne Taylor Racing and I can’t thank them enough for the passion they have. The quality of people who are around us have made the hard work so worth it. It’s fantastic coming to the Roar with Konica Minolta as my lead partner, thank you to Rick Taylor and Michel Mathe for their continued support for many years. And of course, it has been an absolute pleasure to work with HPD and Acura Motorsports, they are very motivated and really want to win the Rolex, Sebring, and all endurance races and I hope we can do that for them. We certainly have prepared the car, team, driver line-up, and our spares package. I think we have the ingredients to be competitive. I’m looking forward to the Roar where we can see where we shake up against the Mazdas and Cadillacs.”