After winning the Rolex 24 at DAYTONA in January, the No. 10 Konica Minolta Acura ARX-05 has led the championship for the entire season and currently holds a 19-point lead over second position rivals, the No. 31 Action Express Racing entry. 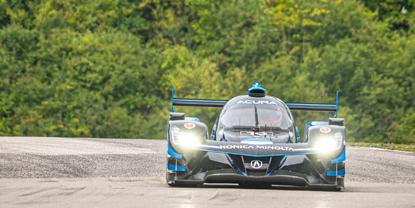 The 2021 IMSA WeatherTech SportsCar Championship will be decided this weekend at Michelin Raceway Road Atlanta at the Motul Petit Le Mans. After winning the Rolex 24 at DAYTONA in January, the No. 10 Konica Minolta Acura ARX-05 has led the championship for the entire season and currently holds a 19-point lead over second position rivals, the No. 31 Action Express Racing entry. Alexander Rossi will once again join full-time co-drivers Ricky Taylor and Filipe Albuquerque for the 10-hour season finale at the 12-turn, 2.54-mile track.

The defending Motul Petit Le Mans winners’ rich history at the monumental event began with a win by Wayne Taylor at the Inaugural Petit Le Mans in 1998 along with three dramatic team victories, five podium finishes and 444 laps led.

“It’s felt like ages since we were in Long Beach,” said Ricky Taylor. “We just need to get to the track and do our jobs. We are prepared and ready for the challenge. The expectations are for very cold temperatures and a long, tough race. The other non-title contending teams aren’t going to give us, nor the No. 31, any breaks so we will have to race as if everyone else has nothing to lose.  Everyone at WTR and Acura/HPD have done such a wonderful job this year coming to grips with the new car. The team has overcome some serious challenges against rivals who are competing with equipment that they’ve had for four full seasons already, yet they’ve matched every challenge. This last challenge of the year will be a big one to close it out. Everyone is very excited to execute our plan and utilize all of the lessons we’ve learned throughout the season to win a championship together.”

With a top finish of fourth position, Filipe Albuquerque looks to not only finish on the podium, but claim his first victory at the Motul Petit Le Mans while clinching the 2021 IMSA WeatherTech SportsCar Championship.

“The 2021 IMSA WeatherTech SportsCar Championship has unfolded in the best way possible for the fans,” mentioned Filipe Albuquerque. “Whoever finishes ahead, between the No. 10 Konica Minolta Acura ARX-05 and the No. 31 car, will be the title winner. It’s not ideal for us because we had a bigger gap at an earlier stage in the championship, but it’s going to be great for everyone else. It will be a hell of a final race! Petit Le Mans is always an amazing race for everyone watching, for the engineers and for the drivers. It’s a very unique track. It’s a lot of fun. We tested there recently, so we’ve done our homework. We’ll see how it goes, but I’m very motivated for it and ready to fight for the win and finish the job.”

“It all comes down to this - Petit Le Mans,” commented Alexander Rossi. “It’s so exciting to be able to go into this event with a chance at helping bring the championship back to WTR and to help Acura defend their title. It is going to be an incredibly tough weekend with some great competitions, but we know what the 10 car is capable of and we have the upmost faith in each other to get it done. I’m so honored to have been able to race for this team in 2021 and I will do everything I can to help them finish on a high.”

The Petit Le Mans Inaugural winner, Wayne Taylor, is hoping to not only win the Motul Petit Le Mans, but the 2021 IMSA WeatherTech SportsCar Championship.

“We started this year with a new partnership with HPD and Acura and came out of the box and won Daytona,” mentioned Wayne Taylor. “We maintained the points lead right up until now and while 19 points sounds like a lot, it’s actually not. So, we are really going to a shootout and whoever finishes ahead of the other car is going to win the championship. If the 31 finishes 6th and we finish 5th, then we win. I know we have a great team, the best drivers in our car and our guys in strategy will be really good. The other thing is that there are 43 cars entered into this race, so can you imagine a 2.54-mile tour with 43 cars on it? It’s going to be chaos. We’re going to go out to stay out of trouble and see where we go into night. And night is going to be very long, so it’s going to be a lot on pressure on everyone. This team, with Konica Minolta, Harrison Contracting and HPD, is going to do our best and that’s all we can do. We’re certainly going there to win this. We’re not going there for another reason. Win or nothing.”

Konica Minolta Business Solutions U.S.A., Inc. is reshaping and revolutionizing the Workplace of the Future™. The company guides and supports its customers’ digital transformation through its expansive office technology portfolio, including IT Services (All Covered), content services, managed print services and industrial and commercial print solutions. Konica Minolta has been included on CRN’s MSP 500 list nine times and The World Technology Awards recently named the company a finalist in the IT Software category. Konica Minolta has been recognized as the #1 Brand for Customer Loyalty in the MFP Office Copier Market by Brand Keys for fourteen consecutive years, and received Keypoint Intelligence’s BLI 2021 A3 Line of The Year Award and BLI 2021-2023 Most Color Consistent A3 Brand Award for its bizhub i-Series. Konica Minolta, Inc. has been named to the Dow Jones Sustainability World Index for nine consecutive years and has spent four years on the Global 100 Most Sustainable Corporations in the World list. Konica Minolta partners with its clients to give shape to ideas and works to bring value to our society. For more information, please visit us online and follow Konica Minolta on Facebook, YouTube, LinkedIn and Twitter.