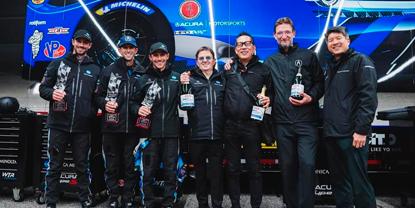 The No. 10 Konica Minolta Acura ARX-05 finished third in the 2021 iteration of Motul Petit Le Mans at Michelin Raceway Road Atlanta this evening, securing the IMSA Michelin Endurance Cup title, falling just a few short meters of the IMSA WeatherTech SportsCar Championship crown. The podium marks their seventh of the season which culminated in bringing the team a second place finish in the IMSA WeatherTech DPi Championship.

Minutes after the clock struck noon, Filipe Albuquerque, from seventh place, took the green flag and immediately claimed sixth with a clinical overtake. He battled to maintain the position and emerged from the team’s first pit stop in fifth. After a long yellow and subsequent restart, Filipe used a blistering run down the back straight to take fourth position into Turn 10a, quickly widening the gap. The team took third position in the second round of pit stops under yellow and maintained the position through a third full course caution.

Ricky Taylor assumed his position behind the wheel with seven hours and 51 minutes remaining, cycling out of the pits ahead of the team’s championship rivals. Another full course yellow neutralized the field minutes later and Ricky took the restart in second. Half an hour later, he took the lead and completed the fourth hour of the race at the front, earning crucial points towards the IMSA Michelin Endurance Cup.

A significant wreck between GT competitors caused a caution period long into the sixth hour of the race. Alexander Rossi entered the cockpit for his single stint as darkness fell and the track surface cooled dramatically. He put forth a strong effort to return the reigns to Albuquerque in sixth place with just under four hours on the clock.

Another yellow flag period brought a restart with three hours remaining and Filipe made a pass for fifth position shortly after. Entering the pits under green in fourth, the team maintained position, setting up an opportunistic overtake by Albuquerque for third at the restart. Filipe pushed hard, passing the team’s championship rivals for P2, this time on the outside of Turn 10a. He made the move stick through Turn 12, expertly using traffic to extend the gap behind.

At the next pit cycle, the chasing cars undercut the No. 10 Konica Minolta Acura, taking earlier green flag stops with one and three-quarters of an hour to go. Ricky Taylor climbed aboard a lap later to take the Konica Minolta machine to the finish. On cold tires, he slid off the track upon pit exit. The pair of chasing cars, with warmer tires, overtook him. After the final round of stops, he fought back brilliantly, closing an 11-second gap to his championship rivals directly ahead. He arrived on the bumper of the No. 31 car on the final lap, attempting a dramatic lunge for the championship in the final braking zone. Unfortunately, he fell inches short. After cutting across the grass at Turn 10b, he relinquished the position before the finish line, taking third place on track and second in the final points standings.

“I’m so thankful for everyone at HPD, Acura, Konica Minolta and Harrison Contracting who give us the opportunity to do this,” said Ricky Taylor. “This was the hardest weekend in recent memory. It was a trying weekend where we didn’t have pace until the race. I think the way the race was going and what we saw at the end was all the drivers doing our best to pay the guys back and earn what the team deserves. It’s an incredibly disappointing result, but we’re lucky to be able to fight like this. Congratulations to the No. 31 guys. They’re always strong and that’s what makes winning these championships so special. Because they’re difficult. You are racing against some high-level competitors. If we’re ever behind them, they’re looking in their mirrors at us. I think the positive is that we have the shortest offseason we’ve ever had this year, so we can go straight to Daytona and finish next season like we wanted to finish this one: one spot higher.”

“Today, we showed what we are made of,” said Filipe Albuquerque. “We had a really difficult start to the week. We were off where we normally are and had our worst qualifying ever. But the race is only over when it’s over, right? After 10 hours we finished only half a second from the title. In the end, even though we lost, we gained a lot of respect in the paddock, even from the guys that won the championship. They took their hats off to us. We are sad, but with honor. The team did a great job. Alex and Ricky drove brilliantly. We made decisions to come back, we have a great car. Again, we should not forget that we won the Endurance Championship, we won Daytona and we made a hattrick of wins. We finished a little bit short of the championship, but it was a hell of a year for our first with the Acura car and my first with the Wayne Taylor Racing team.”

“It always blows me away how, after 10 hours, it can come down to the last corner,” said Alexander Rossi. “Ricky and Filipe were the class of the field today and gave the team every opportunity to have a shot at it at the end. Ultimately, to come a little bit short after so much is a tough pill to swallow for everyone, but also a testament to how good the year has been for the whole team. Being able to be a part of it for the four races was very special and we had some good moments for sure. I’m proud of the guys and what they accomplished today, and I can’t wait to see how it progresses next year with a car that they have a year under their belts with.”

“Firstly, congratulations to the Whelan team and their drivers,” said team owner Wayne Taylor. “They didn’t do anything wrong. They finished ahead on track, and they won the championship, and they deserve it. My team and my drivers were just spectacular. Our partners at Honda Performance Development, Acura, Konica Minolta, and Harrison Contracting deserve many thanks. Our drivers and our team—there are too many good things to say. No one can say that we didn’t put in everything to go and win. Ricky did what Ricky does. I am tired, but extremely happy.”