The triumph extends their lead in the IMSA WeatherTech SportsCar Championship, bringing their points total to 2,765 and extending their lead over the second place No. 31 Whelen Engineering Cadillac DPi to 100 points. 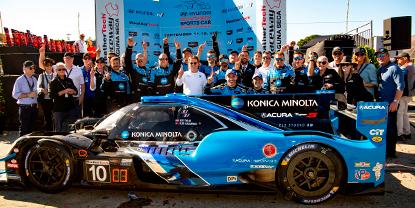 First time IMSA pole winner Filipe Albuquerque led into the Andretti Hairpin from the green flag and never looked back. Despite a minor rear brake issue during the opening stint, Filipe set the pace. The lead changed intermittently through each pit cycle, but victory for No. 10 Konica Minolta Acura ARX-05 was never in doubt.

Ricky Taylor took the wheel with an hour and 30-minutes remaining, crucially staying ahead of lapped DPi traffic. The crew worked fast to clean the brake duct, solving the issue during a stop, and as traffic slowed his competitors, Taylor opened the gap to an impressive 20-seconds on his way to the checkered flag. Ricky showed his experience by avoiding colliding LMP2 cars in a hair-raising moment at Turn 9 of the final lap, bringing the car home to cheers from the pit wall.

The victory, their third of the season, was the team’s most dominant of the 2021 campaign to date. Their closest championship rivals, the No. 31 and No. 55 Mazda Motorsports DPi, finished in P3 and P5 respectively. Today’s win is the 45th for Wayne Taylor Racing in IMSA WeatherTech SportsCar Championship competition. As the championship heats up with two rounds remaining, the No. 10 Konica Minolta Acura ARX-05 team is rising to the challenge.

“Everybody before the weekend was saying, ‘the Jaws music is playing, they’re under pressure now,’” said Ricky Taylor. “We felt like we were in control. We’ve had strong cars and the team’s been executing well, but things haven’t quite been going our way. But we’re the only ones that knew it. Today, I was really proud of the team. They responded to the Jaws music and the pressure by executing perfectly. The car was dominant. Everyone at HPD and Acura worked really hard between the races to give us the best possible engine control and power. Brian and the No. 10 Konica Minolta Acura ARX-05 boys changed the car from the traditional setup. We made lots of developments. The car was creative and well-thought-out, and it showed on track today. This is one of those wins that we have to remember and strive for in the future.”

“What a dream weekend. I love this weekend,” said Filipe Albuquerque. “Pole position and the win. There is nothing else we can ask for. Yesterday, I was super happy with pole. Today, we started well, but second stint was super hard. We had a problem on the rear brake duct, so it was overheating the rear tires and was super hard to drive. I was thinking that it would be incredibly hard for my teammate, Ricky, to do the rest of the race like that. Luckily, in the pit stop, they were able to clean the duct. I was confident in my teammate, I trust Ricky so much, and he delivered. He controlled the race, dominated, and caught the No. 60 Meyer Shank Racing DPi that was on another strategy. He won the race by 20-seconds. Pretty simple. The No. 10 Konica Minolta Acura ARX-05 was perfect, perfect execution, the perfect weekend for us. We had the pace, we dominated, and we took the win.”

“This was obviously the result we came here to get.” said team owner Wayne Taylor. “I’m really happy. The team did a fantastic job in the pit stops. Brian and Logan did an outstanding job on the strategy. The drivers, Filipe getting the pole, leading, giving Ricky the car, and Ricky finishing the race was just perfect. For all our sponsors, Konica Minolta and Harrison Contracting, and all the people that support us. Long Beach next will be tough, because all of DPi will be hot on us, like in Detroit. But at least we achieved what we had to do, and there was no coming second this weekend.”