Heading into the season finale at Road Atlanta in mid-November, the result ensures that they maintain their lead in the IMSA WeatherTech SportsCar Championship with a total of 3,071 points and a 19-point lead of their closest rivals. 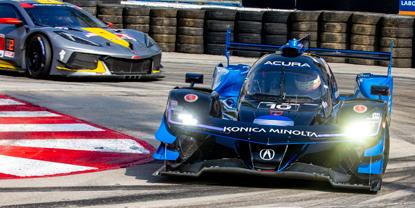 The No. 10 Konica Minolta Acura ARX-05 finished fourth in the Acura Grand Prix of Long Beach. Heading into the season finale at Road Atlanta in mid-November, the result ensures that they maintain their lead in the IMSA WeatherTech SportsCar Championship with a total of 3,071 points and a 19-point lead of their closest rivals.

Filipe Albuquerque was aggressive but calculated at the start, passing a pair of Cadillacs and entered the Turn 2 fountain section side-by-side with second place. He filtered out in third and concluded his stint in fourth position with one hour remaining.

The team executed a one-stop strategy for the 100-minute sprint, with Ricky Taylor taking the wheel for the second stint. Taylor was fast and consistent, bringing the blue and black Konica Minolta machine home in fourth.

The No. 10 Konica Minolta Acura ARX-05 team will conclude the 2021 season in November at Michelin Raceway Road Atlanta for the prestigious Motul Petit Le Mans. Alexander Rossi will join full-time co-drivers, Ricky Taylor and Filipe Albuquerque for the ten-hour endurance event in hopes of mirroring the start of the season with another victory to clinch the 2021 IMSA WeatherTech SportsCar Championship.

“We got the result that we expected today,” reflected Ricky Taylor. “The Cadillacs were clearly fastest this weekend. We finished the best of the rest. Filipe made a fantastic start, and because he did, we weren’t in a position to take a huge risk on the strategy, which ultimately wouldn’t have paid off, so the guys did their thing. We had a good stop, and everyone executed well. We came home with a fourth place at Acura’s home race. It’s nice to get some points and a clean race, but it’s a shame we can’t be on the podium at the Acura Grand Prix of Long Beach.”

“I’m happy with our performance,” said Filipe Albuquerque. “I think Ricky, myself, Wayne Taylor and the No. 10 Konica Minolta Acura ARX-05 team maximized our Acura around Long Beach. Obviously, we would have liked a podium or finish ahead of the No. 31, but they were simply too quick. The margin is very small so it’s all about who wins at Motul Petit Le Mans in a month’s time. Let’s see how it goes. Still leading the championship, that’s what matters.”

“Coming in, we knew this was going to be a tough race for us,” said team owner Wayne Taylor. “From the off, it was all three Cadillacs first, second and third. We said, if the No. 31 wins, we have to be fourth to keep the championship lead and we’ve done that. We head to Motul Petit Le Mans where we’ll be on a more even keel, I think.”

Konica Minolta Business Solutions U.S.A., Inc. is reshaping and revolutionizing the Workplace of the Future™. The company guides and supports its customers’ digital transformation through its expansive office technology portfolio, including IT Services (All Covered), content services, managed print services and industrial and commercial print solutions. Konica Minolta has been included on CRN’s MSP 500 list nine times and The World Technology Awards recently named the company a finalist in the IT Software category. Konica Minolta has been recognized as the #1 Brand for Customer Loyalty in the MFP Office Copier Market by Brand Keys for fourteen consecutive years, and received Keypoint Intelligence’s BLI 2021 A3 Line of The Year Award and BLI 2021-2023 Most Color Consistent A3 Brand Award for its bizhub i-Series. Konica Minolta, Inc. has been named to the Dow Jones Sustainability World Index for nine consecutive years and has spent four years on the Global 100 Most Sustainable Corporations in the World list. Konica Minolta partners with its clients to give shape to ideas and works to bring value to our society. For more information, please visit us online and follow Konica Minolta on Facebook, YouTube, LinkedIn and Twitter. Wayne Taylor Racing’s existing lineup of partners that also features Harrison Contracting, Acura Motorsports, Hammer Nutrition  and CIT.