The Wayne Taylor Racing stable, consisting of five drivers in four cars across three classes, showcased their strong abilities around VIR’s 3.27-mile track with two 50-minute races today. Kyle Marcelli and Daniel Formal secured a podium finish in the PRO class on Sunday morning after demonstrating their impressive skills in the No. 1 Prestige Performance Lamborghini Super Trofeo. Unfortunately, a pit lane penalty caused the team to finish third after running in second position for much of the race. They finished Sunday’s event with a fourth-place finish in Race 2. 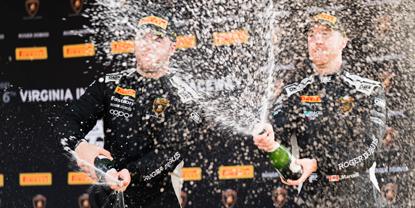 The Wayne Taylor Racing stable, consisting of five drivers in four cars across three classes, showcased their strong abilities around VIR’s 3.27-mile track with two 50-minute races today. Kyle Marcelli and Daniel Formal secured a podium finish in the PRO class on Sunday morning after demonstrating their impressive skills in the No. 1 Prestige Performance Lamborghini Super Trofeo. Unfortunately, a pit lane penalty caused the team to finish third after running in second position for much of the race. They finished Sunday’s event with a fourth-place finish in Race 2.

Although Ashton Harrison suffered mechanical issues during Race 1 where she finished seventh in class, the No. 25 Harrison Contracting LST ended the weekend on a much brighter note to finish Race 2 in third position in the AM class.

The No. 53 Wayne Taylor Racing LST piloted by Jordan Missig endured a consistent weekend where the rookie driver finished the weekend with a pair of fourth place finishes in the PRO|AM class. The 22-year-old continues to impress in only his second weekend driving a Lamborghini Huracán.

Randy Sellari, driver of the No. 03 JG Wentworth LST secured an extraordinary fourth place finish in the AM class for Race 1 and a seventh-place finish in Race 2 after a spin during one of the final laps of the race.

The Prestige Performance with Wayne Taylor Racing team will compete next at Watkins Glen International for Rounds Five and Six of the 2021 Lamborghini Super Trofeo Season on June 24th. Race coverage will broadcast live on IMSA.com/tvlive.

Kyle Marcelli, No. 1 Prestige Performance with Wayne Taylor Racing Lamborghini Huracán Super Trofeo (PRO)
“Race 1 for me was a whole lot of racing because there were so many yellow flags. We qualified in third, but the pole sitter was very lazy on the start which hurt us and fell back three spots. We were able to get one or two back before the pitstop. Daniel had a few battles on track, and we crossed the finish line in second. The pitstop was a bit too quick and we were penalized for it. For Race 2 we started seventh and it’s difficult to pass around here on a narrow circuit, so it’s tough to get a run. We had a great pitstop where we leapt two spots and I was able to get one more on track where we finished in fourth. The pace was strong for the first part of my stint, and I started to deal with a brake issue, and it took a lot of confidence out of me where I probably left a lot on the table for the second half of my stint. We’ll investigate the braking, but we’re inching closer to where we need to be, but still have work to do."

Daniel Formal, No. 1 Prestige Performance with Wayne Taylor Racing Lamborghini Super Trofeo (PRO)
“Kyle started Race 1 and gave me a great car in a third position and we passed a driver coming out of the pits. I maintained that second position for the remainder of the race. There were a lot of cautions, so the tires were pretty good for me. The car felt good and we’re getting close to the window. Unfortunately, we were two tenths too fast during the pitstop which caused us to finish in third position. Moving ahead to Race 2 it became very hot and hard to pass. The car got warm, and we lost a little bit of power on the straight and there wasn’t anything anyone could do. We started seventh and I was able to get up to fifth right before the pit stop. Kyle was able to make a pass for fourth position where we finished. I’m happy and I’m very thankful to the team. Wayne Taylor Racing did a great job. Everyone is a big family and we’re all working incredibly hard together. Kyle and I are new to the team, so we’re all still learning about each other, and we continue to improve every time we get on track.”

Ashton Harrison, No. 25 Harrison Contracting with Wayne Taylor Racing Lamborghini Super Trofeo (AM)
“The temperature was actually manageable for us and the car this morning for Race 1, we had a great start, the track was cool, and the cars were super-fast. I felt we had really great pace after the pitstop and it was time to charge forward, but unfortunately on that first lap we had a mechanical. We had to come back to pit lane several times to figure out what the issue was and at the end of it we decided to just stay out and grab some valuable points. From the time we came back from Race 1, the crew came back and worked exceptionally hard. From 9 a.m. ET – 2:30 p.m. ET they put in a new gearbox, and it became a rocket. I’m so thankful for them. I’m looking forward to Watkins Glen later this month and excited to leave the heat in VIR Leaving VIR with two podium finishes already this season I’m hungry. All I want to do is win and I want to win this championship. That can be done, so my plan is to win every single race moving forward.”

Randy Sellari, No. 03 JG Wentworth with Wayne Taylor Racing Lamborghini Huracán Super Trofeo (AM)
“We started 21st on the grid, so I had to spend fifty minutes battling my way back up and I finished fourth overall, so I had some good times. I was happy with that and the setup of the car. For Race 2 we made a few minor adjustments and I started 17th. I had a great start, blew a few corners in the first few laps, but I hustled back. The car was on point, and I had confidence there, so I was running from good laps. I was still holding fourth place in class, and I made a mistake where I hit a curb where I shouldn’t have. I lost that fourth place and tried to battle my way back up there but overheated. I was just hanging on and went to the pits, but it was just another hot VIR race. It didn’t’ get the best of me, I’ll be back and better than ever in New York. I like Watkins Glen, always have, and have confidence that if we keep the car like it is I will rebound from this.”

Jordan Missig, No. 53 Wayne Taylor Racing Lamborghini Huracán Super Trofeo (PRO|AM)
“Race 1 today was good. We got off to a great start. I was just trying to stay on the track and focus by staying with the guys in front of me. The pace was great. The guys did start to pull away from me because most of them were PRO drivers who started the race, so I knew that later in the race when the AM guys would jump in, I could claw back at them. We had a lot of yellows in the first part of the race, and it played to my advantage because it did not give the PRO guys a lot of time to pull away. Unfortunately, when it was time to pit, we lost a few seconds, so we were just trying to fight back after that to get a good result. For Race 2 the start was difficult because we had an early safety car, but I was able to manage that pretty well. The remainder of the race it was looking like I would be able to finish with a podium, but unfortunately, I was taken out by another driver on turn 14. The car had some drag force after that, but we just needed to adapt to the car how it became and manage to finish the race. After this weekend I feel like I have adapted to the car very well and am set up to finish the season strong.”