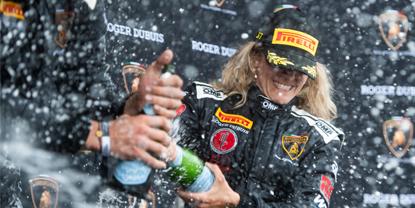 Prestige Performance with Wayne Taylor Racing concluded rounds one and two of the 2021 Lamborghini Super Trofeo North America weekend with multiple podium finishes and a win at the Circuit of the Americas. The team’s five drivers in four classes (PRO, PRO|AM, AM, LB CUP) all showcased incredible skill and competitive abilities around the 3.41 mile, 20-turn track.

The 2021 Lamborghini Super Trofeo season resumes in just two weeks at Virginia International Raceway for rounds three and four starting on June 4th. All five drivers in four classes will look to gain more experience and podium finishes at the famous sportscar track.

Kyle Marcelli, No. 1 Prestige Performance Lamborghini Huracán Super Trofeo (PRO)
Race #1
“Race one of the 2021 season was exciting! It had been a long time since I had been in a single make sprint race format. The level of aggression was high, and I felt that there was a lot of rookie moves by the other drivers. It was sort bit of survival on the first couple of laps and there were multiple times where we could have easily been taken out of the race. I could have been more aggressive. I have been used to the endurance racing format for the last ten years, so I’ll learn from that and be more aggressive moving forward. We’re pleased about a top-six finish, but it could have been better. There was a delay in the pit stop which cost us about six seconds that I think would have put us third or fourth at the end of the race. It’s frustrating when you leave something on the table. It’s a new program for Danny and me and we’re still learning and we’re gelling very well.”

Race #2
“We just finished race two and got our first podium of the year! It’s fantastic for Prestige Performance and Wayne Taylor Racing. Danny started in 11th and did an awesome job in challenging conditions. Rain came down and the entire series was on dry tires, so it was certainly slippery. The pit stop was fantastic, I don’t think we could have done much better which played a big part in our end result. Our pace was pretty good, but there is still some room for improvement. We’re leaving COTA with a fifth place in round one and a third place in round two. I just can’t thank Wayne Taylor Racing enough for the confidence to have me here and I’m grateful for the opportunity and excited for the year ahead.”

Daniel Formal, No. 1 Prestige Performance Lamborghini Huracán Super Trofeo (PRO)
Race #1
“The team worked really hard, and we got the car settled for the dry conditions for Race one. Kyle had a good start, but the drivers behind him were driving kind of crazy, so he was just protecting the car as we have a very long championship. Kyle gave me the car in fifth place, but we came out of the pits in 11th place. The car was fantastic, I was able to come back to fifth in class so I’m really happy about that. The team is awesome, everyone on the team is like a big family and I’m very happy here.

Race #2
“It was an interesting and positive race. We started 11th and I had pretty good stint where I was up to fourth place before my pit stop. There were hard conditions driving on slicks on a wet track at the start of the race and a lot of cars all over the place, so passing was very difficult. We had a great job with zero issues. We’re not the fastest car, but we’re one of the most consistent cars out there and that gave us a third place in our second race.”

“Just finished Round 1 of the Lamboghini Super Trofeo season and I’m super pumped to have podiumed. I’m also very excited because we had guests here from Harrison Contracting and they were able to really experience the series and how exciting this can be to watch. I’m looking forward to round two tomorrow as we’ll be starting fourth again.

Race #2
“Finally, a well anticipated win. I’m so thankful and so speechless. I got out of the car and had so many emotions running through me. We worked so hard for this, and this is just the start of the season. It’s a great start. Wayne Taylor Racing has done such a good job setting up the car and I’m so thankful to my engineers, my coaches, and Harrison Contracting for supporting me. There are just no words to describe this. I’m really looking forward to VIR.”


Randy Sellari, No. 03 Wayne Taylor Racing Lamborghini Super Trofeo (AM)
Race #1
“I came here this weekend looking to be mid pack as this was my first race in the AM class and there are so many fast racers in it. We did have some problems starting out in qualifying as I didn’t have a windshield wiper, the motor had gone bad, and I had to struggle with the first and second qualifying without at windshield wiper. I started 23rd on the grid today and was hit right before the pit window would open in turn-11. My tire then exploded, I lost control and my car sustained some severe damage, so they are trying to get it ready tonight for tomorrow.”

Race #2
“The guys worked really hard through the night to get the car back together and working on an ECU and power steering issue from yesterday’s race. I also had some damage from the accident in my rear diffuser. The car ran exactly how we wanted it to run on the opening lap, but I just touched the curb and spun. I wasn’t done, so I did work my way back up. They did a great job and I had to do my job to finish in fourth. Given the circumstances it wasn’t bad, but I’m ready for VIR and to put this one behind me.


Jordan Missig, No. 53 Wayne Taylor Racing Lamborghini Super Trofeo (LB Cup)
Race #1
“It was a great start to the season today and I was really excited for it. I did make a lot of mistakes along the way, but that will happen at your first race when you’re getting used to these cars. I learned a lot and hopefully will be able to build on that from there.”

Race #2
“The weekend really went well for us. I was able to finish third in race one and fourth in race two. I had a fight with a car on track for third position, unfortunately surrendered that spot and finished fourth, but I brought the car home in one piece. This weekend was just about gaining experience and learning what it is like to be in a Lamborghini Super Trofeo car. It was all about understanding how this car races and drives. I’m really thankful to Wayne Taylor Racing for giving me this opportunity and look forward to VIR in just a couple weeks.”