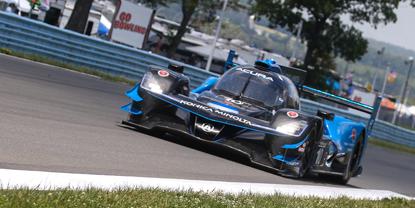 IMSA WeatherTech SportsCar Racing at Watkins Glen International returns this Friday night for a two-hour and 40-minute sprint race. Ricky Taylor, Filipe Albuquerque and the No. 10 Konica Minolta Acura ARX-05 team will look to extend their current 33-point lead in the championship at the famed 3.4-mile, 11-turn permanent road course with Ricky Taylor and Filipe Albuquerque.

Last Sunday, the dynamic duo alongside IMEC co-driver Alexander Rossi completed a successful weekend at Watkins Glen International for the Sahlen’s Six Hours of the Glen where the No. 10 Konica Minolta Acura ARX-05 qualified on pole and finished on podium in third position.

“It’s nice to go back-to-back at the same racetrack,” said Ricky Taylor. “Especially because we know exactly what we want for this week and don’t have to wait another year to make those changes. Our debrief will act more like a pre-event and those meetings have evolved into one where we can hopefully turn a third-place finish into a win!”

While this will be Albuquerque’s first sprint race at Watkins Glen International, the Portuguese driver has two wins from the Six Hours of the Glen from 2016 and 2017.

“Friday night's race will not be as hot at Watkins Glen International since the race is starting at six,” commented Filipe Albuquerque. “Although this race is going to be shorter, Ricky and I are going to have the same exact stints that we had at the Six Hour, except we won’t have Alex. We need to analyze the car more and do the right decisions to make a better car. We will see how the strategy plays out because that is a big role with the engineers, how the mechanics can do the pit stops better than the other teams so we are there to overtake on track.”

“It feels weird to go home and then come back,” added Wayne Taylor. “We have some work to do on the car the past few days to give it better balance and looked at fuel consumption. The guys did a great job last weekend at the Six Hours, so I’m excited to be back and hopefully get another win this year.”

Practice for the IMSA WeatherTech 240 at Watkins Glen begins this Thursday at 2:05 p.m. ET with qualifying following at 5:40 p.m. ET. Green flag will wave on Friday, July 2nd at 6:10 p.m. ET. Flag to flag coverage will start at 6:00 p.m. ET on NBC Sports and TrackPass on NBC Sports Gold.

Konica Minolta Business Solutions U.S.A., Inc. is reshaping and revolutionizing theWorkplace of the Future™. The company guides and supports its customers’ digital transformation through its expansive office technology portfolio, including IT Services (All Covered), content services, managed print services and industrial and commercial print solutions. Konica Minolta has been included on CRN’s MSP 500 list nine times and The World Technology Awards recently named the company a finalist in the IT Software category. Konica Minolta has been recognized as the #1 Brand for Customer Loyalty in the MFP Office Copier Market by Brand Keys for fourteen consecutive years, and received Keypoint Intelligence’s BLI 2021 A3 Line of The Year Award and BLI 2021-2023 Most Color Consistent A3 Brand Award for itsbizhub i-Series. Konica Minolta, Inc. has been named to the Dow Jones Sustainability World Index for nine consecutive years and has spent four years on the Global 100 Most Sustainable Corporations in the Worldlist. Konica Minolta partners with its clients to give shape to ideas and works to bring value to our society. For more information, please visit usonline and follow Konica Minolta onFacebook,YouTube,LinkedIn andTwitter. Wayne Taylor Racing’s existing lineup of partners that also featuresHarrison Contracting,Acura Motorsports,Hammer Nutrition andCIT.